Last night, the NY Islanders played, for the first time, in the new third jerseys. It’s predominantly black with the team’s colours in the piping, the front of the jersey features arching text across the front with the players’ numbers right below. Sound familiar? It’s a bit of a rip-off.

And there’s nothing really new or innovative about this jersey at all. A dominant black jersey is, in generally, being moved away from in NHL jerseys these days after almost every team experimented with it. 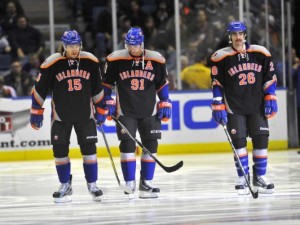 It’s also a clear break with traditional jersey design in the NHL and leaning more towards that of the rest of the major sports’ jerseys (MLB, NBA and NFL). That’s not necessarily a horrible thing, but I’m glad it’s just been relegated to the third jersey only to be worn once in a while. Hockey jerseys, with their prominent logos on the front, are a thing of beauty.

Also, specifically to the Islanders, it seems strange for a team that has struggled for upwards of a decade on the ice, has trouble filling its building on most nights, and after having such a storied legacy as one of the most successful dynasties ever from the States, would eschew their logo (which is at least not in the 9 worst logos in the league, according to this site) and relegate it to a shoulder patch.

But the detailing is something atrocious. Remember the last time a team featured prominent ‘V’ shapes all over their jersey as accents? Mmm hmm.

I think I’ll give this one a pass. What are you thoughts? Throw it on the trash heap? Or hand it out in place of the Stanley Cup?