It was announced today that the Toronto Maple Leafs will play against the Detroit Red Wings outside at the University of Michigan stadium on January 1, 2013 in next season’s version of the Winter Classic. I, for one, am always excited about the prospect of these games and pitting two Original Six teams against each other should be great to watch. Unfortunately, because of the proposed realignment plan being squashed for next season, it will be the only game these two teams play against each other all season, so it might lack the intensity of some of the matches from the past.

But it will sure look pretty! Neither the Wings or Leafs have come up yet in the BTLNHL countdown, so these are teams with two of the top-10 logos in the league (as well as wonderful jerseys), so it will be a aesthetic onslaught of wonderfulness. Like double rainbows (yes, you know the song, but have you seen it done by Spongebob?).

Gary Bettman: Okay, so now the next Winter Classic is official, let’s talk jerseys. Brian, Ken, what are your thoughts?

Brian Burke: I don’t give a rat’s ass what they do in Detroit. ‘Red Wings’ is not Swedish for ‘Don Cherry dresses like an octopus’. Got it?

Ken Holland: Well, I’ve been reading this wonderful blog about graphic design in the NHL. He’s spot-on about everything and I’ve heard he bathes in holy water. Let’s ask him.

Okay, so that didn’t actually happen. Just for clarification, I honestly don’t bathe in holy water. But, if I could decide what the teams wear in next year’s classic, here’s what I would opt for:

Toronto: Go completely retro and pull out the old green St. Pats’ jerseys. The very first time a hockey team from Detroit played a hockey team from Toronto in a professional game was in Jan 1927. The 1926-27 season was the last that Toronto would be named the St. Patricks as they changed mid-way through that season to the Maple Leafs after Conn Smythe bought the team on Valentine’s Day in 1927. I’m not sure if that game between Toronto and Detroit was the only time they played before Smythe bought the team, but that’s a great story for the media to run with that also helps the NHL sell a slice of its history to the masses. It also gives their jersey a specific link to their opponent, the Wings. I’m sure they’ll eventually be in another Winter Classic at some point (as it seems to be an exclusive club) and will have lots of chances to roll out another older version of their Leafs jerseys.

That being said, I wouldn’t go to the jerseys that the St. Pats actually wore during that game, because there’s better ones to be used. I say use the jersey from the original St. Pats days, from 1919-1922. I’d make the white more of an off-white, similar to what the Rangers did in this season’s Winter Classic but maybe a smidgen lighter. Make the shorts the same green as the jerseys (although, I’d be tempted to see what they would look like as a beige colour, as I love what the Flames did in the Heritage Classic from last season) and the socks with the same off-white from the jerseys. For anyone watching, it’s would be like watching history come alive, but not in the ‘Night at the Museum‘ sense. Much better than that.

I think the rabid Toronto fan base would be more open to a temporary name change for the team for a single game than most other fan bases in the league. Plus, it’s a nice way to start interest leading into the 100 year anniversary of the Leafs during the 2016-17 season. If not, well, just write ‘Leafs’ on there instead of ‘St. Pats’. 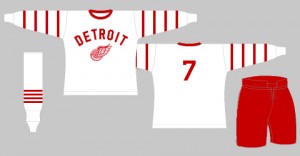 Detroit: Back in 1927, when they played the St. Pats for the first time, Detroit was known as the Cougars, so I’d go back into that era as well, just to continue to play on the historic theme that Toronto sets. The last time Detroit played in the Winter Classic versus Chicago, they used their original Cougars jersey with the blackletter (typography term) “D” in a red stripe (which would have been what they wore against the St Pats), so in the interest of increasing jersey sales with something completely new – and also to get something aesthetically better – go to the Cougars’ 1926-27 jersey.

But seriously, what is it with Detroit and it’s horrible feline sports logos? Like the so-awful-it’s-awesome Detroit Tigers logo from 1927, the Cougar on this jersey looks like it’s drawn in pavement chalk by the owner’s cousin’s niece (so nobody has the guts to say it’s horrendous). So, replace the cougar with the original logo of the Red Wings from 1932, which is not that different from the current logo but different enough that it still looks like vintage. Bam, a new historic Red Wings jersey! And a damn nice one too.

Other than that, I’d keep everything else the same. Four thin stripes on the sleeves and socks, and with red shorts (but remove the white stripe). And don’t go off-white, keep it a pristine and glowing white.

Then put them on the ice and watch both teams in all their vintage glory. Let your mind free and pretend you’re watching a game from the 1920s outside. Watch the snow lightly fall over the ice. And watch the Leafs beat the Wings 2-1, which would be the exact same score from their game in January 1927.

What say you? What would you choose if Bettman called on you to pick?

Now, if you’d excuse me, I need to find some holy water to bathe in.