A few years ago, right before I was actively thinking about purchasing an old Vancouver Millionaires jersey for myself, the Canucks bought up the rights to everything Millionaires-related and all of the merchandise promptly disappeared, leaving me wondering and hoping that they would eventually surface again, if not on the ice during an actual game, then at least in the stores.

After teasing us with images of a photo shoot from a couple weeks ago, that day is finally here, as the Canucks officially announced today that the team will be bringing back the circa 1910s jerseys and will be wearing them when they play the Red Wings on March 16. You can read the entire press release here if you like.

It’s pretty incredible how true they remained to the original jerseys, as they really are almost exact replicas from what was worn by the only team based in Vancouver to have won a Stanley Cup. Here’s a couple Instagrammed images announced by the team’s Twitter account. 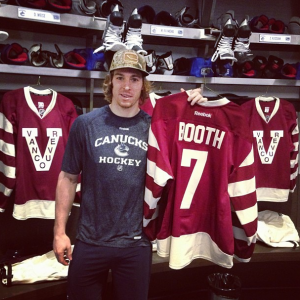 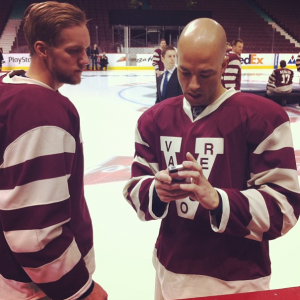 For my money, I love them. Readers will know that I’ve always been a fan of the historical aesthetics of hockey and all of its idiosyncrasies. The obvious complications of these jerseys is if they decide to put numbers on the sleeves – which I’m not sure if it’s mandated by the league to do so – will be awkward. If they do have them, my guess is they’ll probably be maroon with a thick outline of white, or vice versa.

Yes, the logo is weird in the sense that nobody except for some Asian countries reads up to down, and absolutely nobody then reads down to up. And the font’s in Helvetica, which is a great font for readability, but has no character at all when placed on a hockey jersey. But the simplicity and ballsy bizarreness of it – as well as understanding that it was designed in a total different era where you could get away with weird things like this – makes me totally okay with it. Did I also mention I’m a Canucks fan? #candonowrong

Aside from that, I love the simplicity of the uniform in general. One colour and white, which is what the Maple Leafs have been thriving on and succeeding with for decades. The stripes on the sleeves is a common aesthetic for the early days of hockey and it’s actually done quite well in this case.

So hot damn, I will definitely be watching on March 16 and any lingering hatred for the league over the lockout will be completely burned up in smoke when I put down some cash to buy one of these jerseys. Maybe with a #6 for Silas Griffis, the captain of the Vancouver 1915 Stanley Cup winning team?

In my ranking of the Worst to First Canucks jerseys from a while ago, this one would come in at #2, ahead of the Flying Vs.