The most convenient thing about the Dallas Stars’ logo being leaked is that it allows me to write about just the Stars right now instead of having to discuss both the Stars and the Hurricanes on June 4, when things get officially leaked. Or released. Same thing.

So, the Stars have the first shot at setting the bar for between-season branding tweaks for the entire league. And that bar has been set pretty low. Silly Dallas, this is hockey, not limbo! I don’t think the Stars are this limber anyway. How official is this logo, and how much can we rely on the leak? Considering it came from the official Stars iPhone app, I think it’s a safe assumption.

First off, is it better than their current logo? Yes. Is it enough to climb out of their lacklustre placing of 27th in the BTLNHL Countdown? That would mean it’s better than the Florida Panther’s logo, ranked at 26th. I’m not totally convinced yet.

But first, what has improved from their previous logo? For one, it’s simpler. The awkward “Dallas Stars” text has been removed and replaced with a simple large D, which considering Dallas in nicknamed “the Big D”, it makes sense conceptually. Seriously, that text was horribly constructed and looked like italic Arial/Helvetica, which makes me wonder if it was actually designed with MS WordArt. The text is gone, and that’s a good thing.

They also simplified the colour scheme by removing the gold/yellow from the logo, which I don’t mind. At first it looks a little bare without the gold in there, but it allows the Stars to really play up the silver/light grey look that they’re developing, which goes well with the green and could look really nice to used correctly. Just as long as they still keep the green heavily in there because otherwise they’re moving toward a monochromatic LA Kings-style aesthetic. Which is boring and awful. We’ll see where they go with it.

But, as much as this logo is clearly executed better than their previous one, the concept is barely different. And even though they simplified some of the elements, they borrowed almost the exact same star design from the Blue Jackets with beveling and embossing to match. I’m not automatically against bevelling like this, especially when it’s a little more subtle like it is here, but it’s not necessarily something I readily condone either since it’s usually indicative of lazy designing.

In this case, however, I think it’s more of a case of taking a concept and forcing it to work instead of re-visiting the initial concept. Overlaying the D and the star is an interesting concept to simplify the logo but keep it similar to the previous logo, but it just doesn’t work. The deep vacuous black hole in the middle of the logo is terrifying and if you stare at it long enough, you will find the secrets of the universe and everyone on the other side will look like the people from the Black Hole Sun video. Frightening!

The D and the star also start merging together because there’s not enough distinction between them. If you look quickly, you could mistake it for a P or an R. The designer tried to break it up with the black wedges going into the star along the outline of the D, so they clearly saw it was an issue. It just wasn’t rectified enough.

And does anyone else think it looks more like a boot spur?

According to team owner Gaglardi: “What I wanted for this franchise was a logo and a look and a crest that when you look at it has timeless, original-six, vintage, classic qualities to it, and that’s been the theme of what we’ve been pursuing,” Mmmm…yeah, not really there yet.

It’s a good attempt at simplifying the concept of the original logo, but it’s becoming clear that it’s not a concept that can work. My guess is that the Dallas ownership didn’t want to create a drastic departure with the logo concept, even though it was necessary. It’s too bad because it’s a missed opportunity. 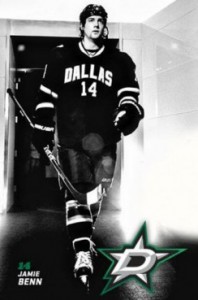 Speaking of missed opportunities, nothing disappoints me more than the fact they didn’t seem to make any sort of improvements or changes to the jerseys. They are pretty close to being the worst regular jerseys worn in the league right now, with absolutely no character and no colour. I’ve said numerous times that when you’re working with a clean white sheet of ice, the best thing to add is splashes of colour to it. The Kings don’t get that, and the Stars don’t seem to either.

I realize it’s a black-and-white photo that we’re working from to get a sense of the jerseys, but they certainly look black, and nothing seems to have changed at all from the previous season’s jerseys.

This is a horribly missed opportunity, and I hope I’m wrong that they’re not really changing them for this new logo, and these are just old images that are going to be updated once the jerseys are released. I hope.

Hooray, another circular alternate logo! Just what we wanted!

I’m not always against using them as an alternate logo, as they can sometimes be very interesting, especially when you go with a totally different concept for it. But this is nothing more than the exact same logo with no additional elements aside from the “Dallas Stars” text and the removal of some of the outlines on the main logo.

It’s pretty uninteresting and doesn’t add a single thing to the brand, except to get it confused with coffee.

So in the end, the logo is a bit of a disappointment, but it’s definitely a step up from where it was. I think I’d move it up to #23, just ahead of the Blue Jackets, but still below Tampa Bay. For the jerseys, I’ll hold my vicious profanity-laced tongue until we know for sure if it’s changing or not. And the alternate logos…meh.

What do you think? Agree? Disagree? Make a comment below.