October 28, 2013: Recently updated with the official announcement happening on October 27.

Looks like the EA Sports’ NHL games are good for more than just entertaining flying body checks. They also leak new jersey designs. As the story goes, a gamer recently uploaded a new roster to his/her NHL’14 game and the new Flames’ thirds showed up on the game. My guess is that makes this jersey leak pretty official, with NHL’14 being an officially licensed NHL game and all.

The official announcement from the Flames’ organization happened yesterday and yes, the leak was incredibly accurate. In fact, it’s exactly the same, aside from additional black around the laces.

The jerseys themselves are not too bad, even if they look like a complete rip-off of another team’s former third jerseys. But, if you’re going to copy something, that’s not a bad one to start from. The biggest feature of these new jerseys is the use of a script font across the front. Since they are non-white jerseys, I’m assuming that they’ll be worn when playing at home, so it serves the useful purpose of reminding all of the fans in the arena that they are in fact in the city they thought they were at the beginning of the game.

“Wait, the team in red scored? They’re winning the game? WHERE AM I? Oh okay, I am in fact in Calgary still!” 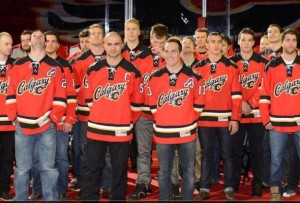 Rebuilding-franchise-jokes aside, the script font actually fits with the Calgary western frontier mystique, and fits with the brand of the city and especially visually connects it with Calgary’s most famous annual event, the Calgary Stampede. Script fonts won’t work for every city (and I don’t think it worked especially well with Buffalo IMHO), but it works great for the Wild – more on that later – and I think it works well for the city of Calgary.

Because of that, the use of the Flames’ logo in black to the bottom-right of the wordmark is unnecessary and doesn’t serve a purpose. What would be more interesting to me is to incorporate some of the logo’s elements into the wordmark to create something more visually interesting that could really stand on its own as an accomplished alternate logo. Adding some flame elements to the wordmark couldn’t have been that difficult to do, and would negate the need for the logo there. That’s what makes the Wild’s third jerseys shine so much: they used some of the elements, like the star, on the wordmark and created something more than just a script font. It would have been a lot of fun for Calgary to do something similar.

Instead, they spent way too much time focusing on a small circular shoulder patch. I like the creativity shown in design of the patch, but it has a very distinct ’70s feel to it, looking like the bastard love-child of the old Oakland Seals and Colorado Rockies logos. However, I like that they basically took the Albertan provincial crest and altered it enough to make it something unique to the Flames, creating a tight design that fits with the colours and brand. But the worst part of it has to be that ‘F’ forming a mountain. It’s awkwardly executed, feels forced and doesn’t really work as a mountain. It makes the F looks docile and beaten down. Also, the fact that it already says ‘Flames’ on the patch makes using the ‘F’ superfluous and unnecessary.

All that being said, I’m glad to see that the third jerseys get rid of the Canadian and Albertan flag patches on their jerseys. The Flames are neither Canada’s only team, nor are they even Alberta’s only team. A little presumptuous on their part. And the blue of the Alberta flag doesn’t even fit with their brand anyway.

Otherwise, the rest of the elements are quite nice. As more teams seem to be doing (and which the Wild did fantastically on their new road jerseys), the shoulder yokes are being squared off at the natural seams of the jerseys. I like this in general, but for the Flames, it’s pretty harsh and aggressive with the black yokes on the red. The piping along the sleeves and bottom of the jersey are more traditional and minimalist than their current other jerseys which is a good thing, because it’s a bit of a mess on the current ones.

In all honesty, red, black and yellow is not the easiest colour palette to design with, because it’s so drastic, so given what they have to work with, it’s not too bad. But obviously, there are issues.

The biggest drawback of the introduction of these third jerseys is that it got rid of last year’s throwback third jerseys. From my understanding, they were well-liked in general and among the fan base. Me, they only remind me of 1989, which makes me sad. But then they make me think of 1994, which makes me happy.

The best thing to come out of the announcement was some of the other concepts that were worked on: 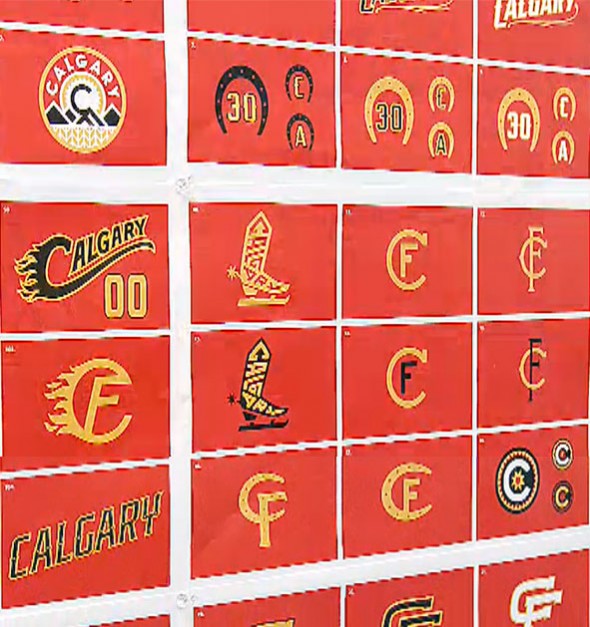 Some of the concepts are excellent and it’s nice to see they actually did try to work in some flame elements into the script font in some instances (as I mentioned above). It’s disappointing something like that didn’t make it, but without know the full process, we’ll never know why not.

The thing that strikes me about these concepts is that they were going full-retro (hipster even?) and full-cowboy with most of them, from the horseshoes to around the numbers to the skate/boot with the awkward lettering in them. It’s interesting to see how much they really focused on getting a “C” and “F” icon created, but in the end, it wasn’t a direction they went in.

In my Great 2103/14 Catchup post, I put these in the Bad column. But, despite the mis-steps, there’s enough good things happening here that I think I should have put them in the Good column. If the Sharks’ new jerseys snuck in there, these deserve that as well.