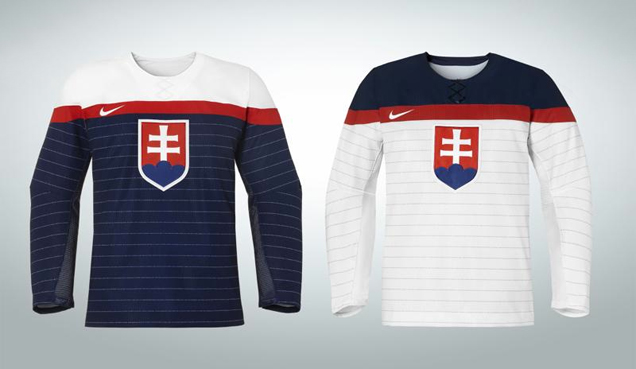 Nike comes back to the Olympic Jersey Designing table, and it’s Slovakia’s turn to be introduced to some gimmick that Nike wants to try out. There’s a lot of good things happening with this jersey, but I’m still not totally sure if it’s because Nike has lowered the bar so far with their jersey designs that any jersey that’s not a complete clusterfuck will be celebrated as great design.

For the moment, I’ll forget the thin stripes of text running horizontally across the designs. If you take that away, these jerseys are pretty basic according to Nike’s aesthetics for the rest of the Olympic jerseys. The white jersey is remarkably similar to the American white jerseys, with a symbolic crest on the front, a red stripe above the crest to help emphasize the Nike logo as much as possible, and the blue shoulders. Luckily for them though, Slovakia doesn’t have any glossy anything on the top of the jersey (other than those damn laces, of course). The blue jerseys are the exact same design, just with the blue and white switched around. Pretty safe and innocuous by Nike’s standards.

The crest itself is simple, elegant and certainly symbolic of Slovakia, it being the country’s official crest and all.

My only complaint about these is that it would have been nice to drop the crest just slightly on both jerseys and give them a little more space from the red stripe. All the jerseys following this aesthetic are very top-heavy with none of the traditional striping at the bottom of the jerseys found on 90% of the hockey jerseys out there. It’s less of an issue on the white jerseys, since they’ll have blue shorts to even out the look visually. The blue jersey, not so much. The eye will always be drawn to the point of most contrast, so on the blue jersey, people will just be looking at their shoulders instead of the crest on the front of the jersey.

But in some way, given the pale striping that covers the jersey, it’s a good thing they didn’t add in any other features as it would have created something overly complicated.

These stripes are Nike’s latest gimmick: those stripes are actually lines of text that read out as Slovakia’s national anthem Nad Tatrou sa Blýska (or, Lightning Over the Tatras, in English). It’s an interesting concept that at first glance, I really like. It’s a way of establishing a visual specificity to an otherwise generic-looking jersey (by Nike’s standards) for Slovakia. And, it rewards the person looking at the jersey by engaging them and interacting with it a little further than they otherwise might. It’s not unlike the 2010 Canadian Olympic jerseys with the subtle and detailed illustrations within the maple leaf.

And if you’re going to include a whole load of text on a jersey, this is certainly one of the best ways to do it. And the use of thin stripes like this are certainly a unique look to modern-era hockey, and could be drawing from deep within hockey’s history where horizontal stripes covering a jersey were certainly a norm (see: Ottawa, Hamilton, New York, Chicago, among others). I’m not sure, though, I can give Nike that much credit as their disregard for any hockey tradition is much more evident with the jerseys they’ve released over the last couple months. But, if they did have history in mind, it’s an interesting balance between the historical aesthetics of hockey and tying that to something modern and new.

So, for the modern era of hockey, it’s unique and, when tied to a relatively minimalist jersey like this one, actually works pretty well. The more I look at it, the more I like it. This is the first time so far with the 2014 jerseys that Nike has managed to keep things respectful to the country and traditional hockey aesthetics while still adding something interesting to further the conversation of hockey jersey design in general. This will be one of the jerseys I’ll be watching closely during the Olympics though, to see how these thin stripes actually hold up during game play.

But it still has those damn fake laces. Bleah.

For more images of the new jerseys, go here.