While the biggest news surrounding Corey Crawford’s masks this past season was less about design and more about its magical disappearance before the Stadium Series game, the art featured on Crow’s recent buckets deserves some attention on its own. Airbrushed by Stephane Bergeron out of Quebec, Crawford’s masks stand out from the pack for their clean, simple and understated aesthetics.

After Chicago’s big 2010 Cup-winning season, Bergeron created this simple yet detailed design for Corey in 2011 that has been left almost unchanged ever since. With the circular logo featured on top, this design puts all the focus on the iconography of the Blackhawks franchise. It was wise to mute the colors in the alternate logo and background imagery to put all the focus on the logo up top, but the high-contrast of the black and red still detract from the logos in the foreground. The future variations that Bergeron crafted are a step in the right direction and really showcase the beautiful detail put into these designs.

With only slight modifications to the previous season’s design, Bergeron created two variations for Crawford in the Hawks’ most recent Cup-winning season. On a white background instead of the bolder black and red, the only difference between these two was a swap of the vintage circular logo for the primary Blackhawks mark on top. Similar to the refreshing look of Tim Thomas’ 2011 monochromatic lid, Bergeron’s decision to keep the “C” logo black and gray was both an interesting and successful one. From the two Chicago logos and feather accents to the collage-like background, the different elements all tie together through their soft, monochromatic treatment. The red accents – on the feather tips, primary logo and cracks throughout – draw your eye through the design and allows the viewer to appreciate all the subtle, beautiful details put into these masks.

Crawford kept the same masks for the 2013-14 season, but hey, if it helps you win 2 Stanley Cups, why fix what isn’t broken?

After the mysterious disappearance of Crow’s new Stadium Series mask before the outdoor game against Pittsburgh, Corey was forced to wear his regular season bucket for the game at Soldier Field. While we still don’t know what ever happened to this mask, luckily it was photographed ahead of time so we can still discuss the design.

Standing on its own, I’m not a huge fan of this mask. The style – unlike the other designs Bergeron has created for Crawford – is very airbrush-y (for lack of a more technical term) and reminds me of those tragic little airbrushing booths you find along sidewalks in tacky beach towns. Style and technique aside, I think the overall design and placement of the stripes and logos works terrifically for a football stadium. While the beauty of Crawford’s regular season mask is in the subtle detail, that would all get lost in a venue as large as Soldier Field. This helmet would have complimented the classic black Stadium Series jerseys perfectly (although nothing could have ever rescued those nasty chrome logos) but sadly, the legend of the missing mask lives on, and we’ll never know just how great this bucket would have looked on the big stage. 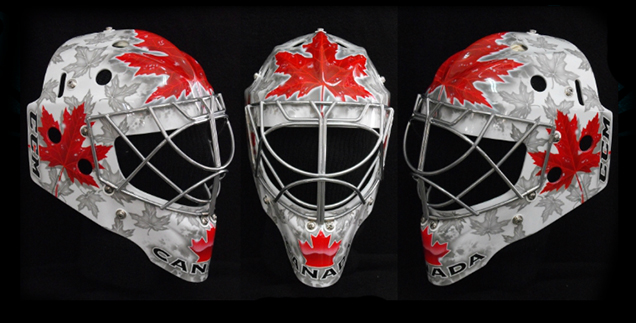 While the world never got to see this 2014 team Canada mask on Olympic ice, the design is certainly still worth talking about. Not dissimilar to the crisp simplicity of Corey’s Blackhawks masks, this design allows the maple leaf to be front and center in a much more tasteful way than Nike did with their jerseys (who doesn’t love those fake rubber laces?). This mask might be a little too simple for the big international stage, but the focus on the maple leaf has always been popular for Canadian designs, so the overall concept and sharp details are still spot on.

Agree? Disagree? What do you think is Crawford’s best bucket? Any other goalies you’d like to see featured in this series? Let us know in the comments below!