It’s summer-time here in North America, which means the newest champions have been crowned, and those playoff teams who came so close to seeing their names immortalized on Lord Stanley’s Cup are already feeling the pressure and heat of next season. But hardcore hockey fans may also be feeling a chill if their team did not draft well this year or make any exciting trades. Hockey enthusiasts are no strangers to the bleak cold. This sport was birthed on the frozen ponds of the great north and raised in below freezing temperatures. With the introduction of modern indoor arenas, and teams relocating to places that some folks think that ice hockey should not exist in (looking at you, Arizona Coyotes), the sport is starting to feel warm enough to bring a beach ball to whack around in the nose-bleed seats. In this installment of Top 5, I hope to warm your icy hearts by ranking hockey’s currently used “hottest” logos. 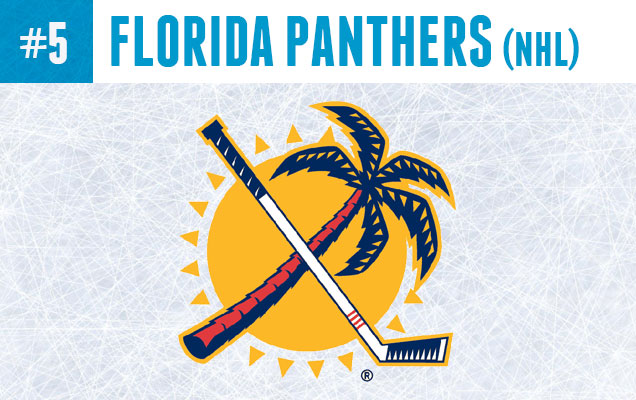 Amazingly, this is the second of two NHL teams in the ‘Sunshine State’ and more specifically, this team is located in the city of Sunrise, Florida. The Panthers are, geographically, the southern most team in the league. Considering the facts mentioned here, It seems almost mandatory for this team to include some sort of sunshine symbolism in their branding, and so…they did! Though, it’s more subtle then some of our other entries in this countdown, the Panthers secondary logo, which can be found on their jersey’s shoulder, is a beaming golden yellow sun with a palm tree and hockey stick crossed in front, highlighted in the remaining colors of the panthers branding palette: red, navy blue and white.

This logo is overall very appropriate for this team, and blends well with the team’s leaping panther primary logo. However, maybe this design is a little too safe? or perhaps too obvious and simplistic. Can the state of Florida be represented by bolder symbolism than palm trees and sunshine? Maybe a bingo card? Or Viagra pills? A golf cart? Okay, I’m only joking of course, but I think this logo could have been pushed a bit further, creatively. For example, could the navy blue have been used to represent ocean waves? Florida is a peninsula after all, and is almost entirely surrounded by water. Just saying.

Even though this is the ‘sunniest’ logo on the list, I don’t know if it could stand on it’s own as a primary logo, which was the deciding factor here. Admittedly, this logo is still a big improvement on the alternate logo the team wore on their shoulders before their 2012 re-branding. 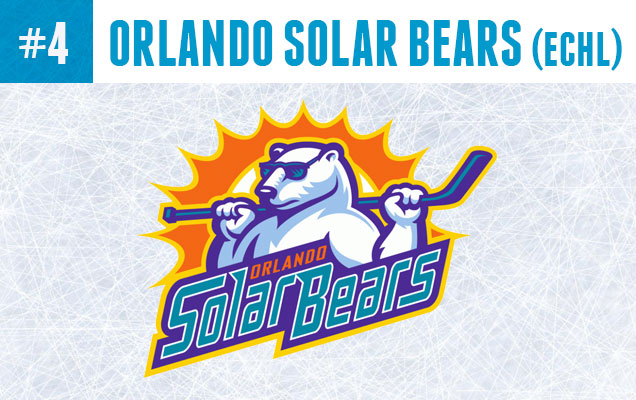 Another Florida team has made this list! No big surprise here. The Solar Bears located in the always sunny Orlando, Florida and founded in 2011 are one of the newer additions to the ECHL. Interestingly, This team is actually not the first ‘Solar Bears’ in Orlando. The original team played in the IHL from 1995 to 2001 and had a logo that was the kind of thing that nightmares are made of. Is that even a bear? Whatever it is, it looks like it may be participating in some sort of illegal activity. Needless to say, the current Solar Bears logo is a vast improvement on the original. This orange and gold sun is bursting with warmth surrounding the most laid back sunglasses wearing polar bear I have ever seen. Casually stretching with both paws on a hockey stick above it’s head, this bear may be the most appropriate representation of Florida yet.

The logo is rounded out by the teams name in a slanted san-serif font in violet and teal that nicely contrasts the orange and gold of the sun. There are some strong design concepts working for this logo, especially the great color usage, and shading making the bear look as if he is really soaking in the almost overwhelmingly bright sun. A team using 4 very different colors in their logo and overall branding might be advised against by modern designers, but somehow it actually works pretty nicely for the Solar Bears.

Given all the aspects of this logo that I do like, it does still come off as a ‘minor league’ looking team, which is just fine, really. This logo is seriously fun, even if the concept is borderline silly.

Located in Fort Wayne, Indiana, the Komets have continuously used this name and location since 1952, making them one of the oldest minor league franchises to do so, and more impressively, they have only made minor changes to the logo since it’s inception. Using the bold combination of orange, black, and white, which hockey teams rarely utilize, besides one team of former bullies I can think of. The Komets logo is an orange, razored-sphere, reminiscent of a saw mill blade, that we are led to believe is a fiery hot space comet…ahem…KOMET blazing it’s way through the milky way. Across this shape, is the team’s name in black, with a white stroke around the letters. The Komets have a simple, and mostly effective primary logo.

It’s hard to find anything to complain about with this logo design and their overall brand identity. The only downside I can see here, is that I get the distinct sense that this logo would look very good on kitchen or bathroom cleaning products, probably because they remind me a little of this.

Overall, The Komets proudly possess one of the classiest looking logos in the ECHL and have made a smart move, recently adding a very well designed complimentary secondary astronaut logo, that still uses the classic Komet swirl in the background, reinforcing the ‘Komet’ style and their unique branding. 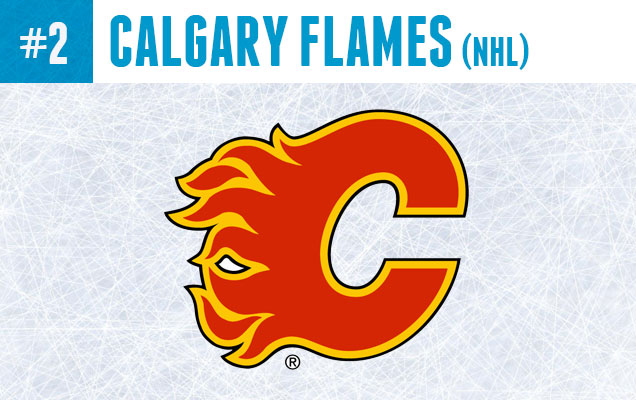 Located in one of the colder regions on our list, The Flames have been in Calgary, Alberta since 1980 and were formerly the Atlanta Flames in the much warmer U.S. state of Georgia. Calgary kept the tradition of the Atlanta logo by dousing a letter of the alphabet in flames of red and gold. Calgary’s letter ‘C’ is different from the ‘A’ by having the flames streaming backwards to the left of the letter, as if in motion.

I am not sure how well the ‘C’ logo was received upon it’s introduction in 1980, but knowing the club’s history of their logo being nearly completely based on Atlanta’s design, I can see how someone might think this was a lazy concept, however, time seems to be the deciding factor on this one.

34 years later, Calgary’s logo has become strong and proud with a now, long standing history of it’s own. The team has kept the same primary logo for it’s entire history in Calgary, besides switching up the color scheme here and there, and admittedly, the flaming ‘C’ looks great on their sweaters. In fact, Complex Magazine ranked Calgary’s jerseys 3rd overall in the NHL, only behind the Blackhawks and the Red Wings. It’s hard to argue that, though it is not the most original design, Calgary has a hot logo and has become a classic by itself. 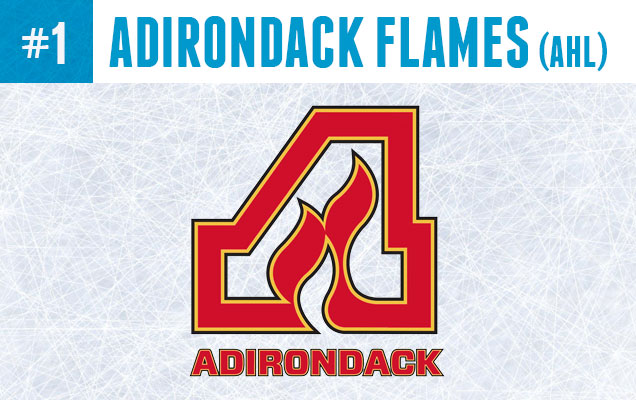 Formerly the Abbotsford Heat of British Columbia, the newly formed Adirondack Flames will begin this upcoming 2014-15 season with a new name and new location, playing in Glens Falls, New York. The Flames logo is a near exact replica of the now defunct Atlanta Flames who played in the NHL from 1972 to 1980. Putting aside my own personal beliefs that this recycling of a logo may possibly bring bad luck from the hockey gods, I have to say that I do understand why the current Flames wanted the old NHL logo; it’s a downright ELITE design. The logo is a thick crimson red outline of the capital letter ‘A’ with two fiery flames shooting upward inside the A’s negative space, with this entire shape outlined in gold.

The Adirondack Flames have only tweaked Atlanta’s logo a little bit, adding a black outline to the shape. This addition seems somewhat unnecessary, considering that the A already has an outline in yellow but the black does make it a little ‘bolder’, and from what I’ve seen on the teams website they are sometimes also filling in the A’s negative space in black, which is the best looking version so far, in my opinion, for this Adirondack team. I would love to see the black filled ‘A’ as the primary logo on their new home sweaters!

It seems all too obvious that the flaming ‘A’ is a fan favorite making it the number one hottest logo on this list! I can only imagine that fans of the new Flames will gladly sport merchandise with the ‘A’ logo and we hope that they can stick around a little longer than the original Atlanta team did, without getting burned.

Agree? Disagree? Did we miss a hot logo that should’ve burned up this list? Let us know in the comments below.