If you missed Part 1, you can check that out here. 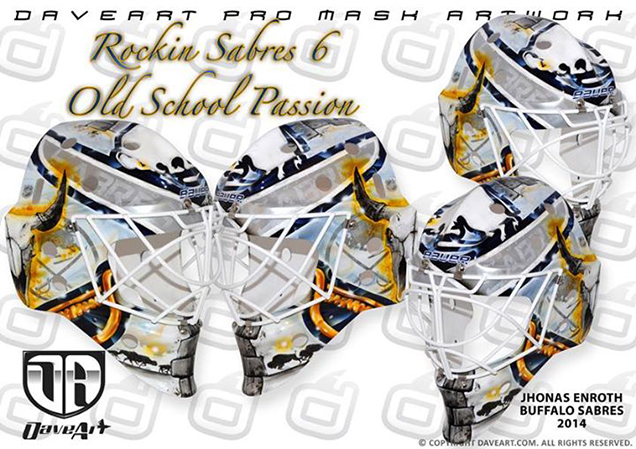 After Ryan Miller’s fire-sale departure last season, there remain a lot of questions around goaltending in Buffalo this season. Making a good case for the starting job is Jhonas Enroth, and his new mask is ready for the big stage.

Gunnarsson describes this design on his Facebook page as an “old school design” that “breath[es] Buffalo Sabres 100%.” This mask incorporates buffalo elements in many different styles that all come together through the trimmed-back color palette and signature metallic effects throughout. Each side sports a silhouetted Sabres logo in metallic texture, eclipsed by a hyper-detailed buffalo skull. The flaming yellow edges on the skulls add visual interest, but also help subdue the glittery effects that can sometimes be overkill (see Henrik’s in Part 1).

While this mask is certainly busy, as Gunnarsson himself describes, it “transforms in front of your eyes and enters a new dimension.” Hopefully we’ll be seeing plenty more of this mask on the ice at the First Niagara Center this season. 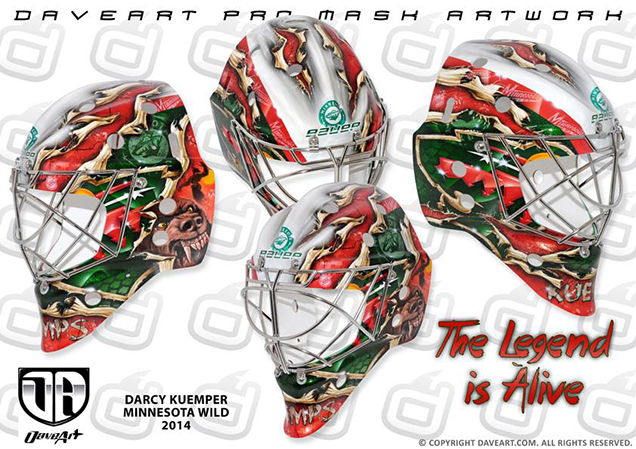 Like most of Gunnarsson’s work, Darcy Kuemper’s latest mask is extremely detailed yet overall, has a pretty basic concept. The vagueness of what the Wild’s mascot is exactly gave Gunnarsson some leeway and room for creativity in incorporating the team identity into this mask. He and Kuemper went with a werewolf theme, featuring hyper-detailed flesh tears around the red, white and green striped design.

Unfortunately, since the fleshy red color is already part of the team’s palette, some of the detail gets lost with the red and green parts all meshing together. Without taking a closer look, it’s hard to tell what parts of the red are pieces of the Wild logo and which are the added tears. A nice subtle detail however – underutilized across the league, in my opinion – is the application of the Wild seal and wordmark to create patterns within the red and green areas. It adds more visual interest and incorporates the team logos in a unique way. 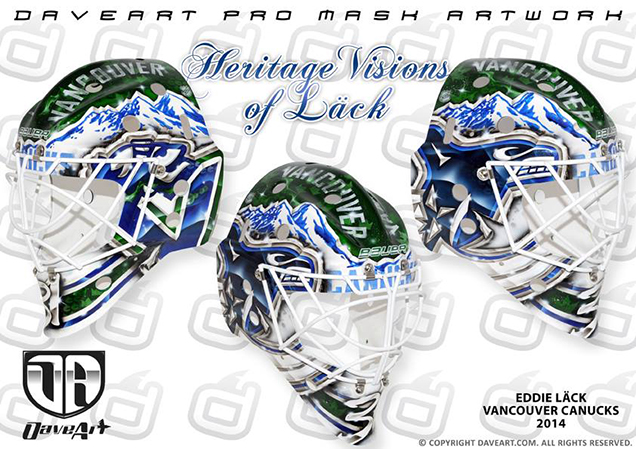 After some uncertainty about what to do for his mask this season, Eddie Lack used power of the people and held a contest to design his 2014-15 bucket. Lack received some, um, less than appealing submissions, telling NHL.com “there was even one with just meatballs on it. There were some really interesting designs, some weird ones too; I don’t think people take me serious enough.” After ruling out anything involving Swedish dinner entrees, Lack landed on the sketch of 14-year-old Justin Mo.

“The thing that I liked about this one is that it has the mountains, which represents Vancouver, a little version of the city up close, all the Canucks logos, Sweden and Canada too,” Lack explained. “It’s pretty much got everything.” Like any good mask designer, Mo considered the team’s identity as well as Lack’s heritage when choosing which elements to include. Although Mo’s original sketch showed the Canucks logos, Canadian maple leaf and Swedish crowns prominently on each side, painter David Gunnarsson chose to take a more subtle approach and worked in the crowns and leaves as a pattern in the green background.

The painterly effects in this mask are quite nice close up, but the design is still graphic enough to read well from a distance. Stick taps for Justin and Dave on an excellent collaboration. 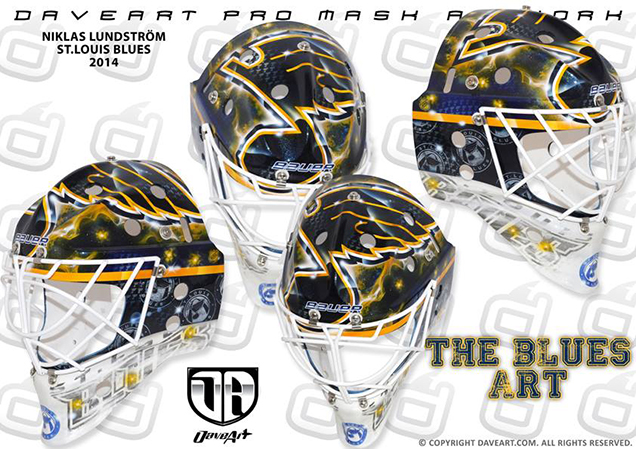 Dave Gunnarsson adds to his seemingly endless flow of new masks this summer with logo-centric Blues mask for Swedish prospect Niklas Lundstrom. While likely to be the third-string this season behind Brian Elliott and Jake Allen, it seems Lundstrom will be prepared if and when he gets the call to play in the big leagues. As Gunnarsson describes on his blog, this mask is all about the St. Louis logo, also inspired by the classic look of the Blues’ new uniforms.

Like most of Gunnarsson’s designs, this mask has a lot of special effects going on, but the large note logo on the top works as a focal point that draws the eye to the center. Like on Kuemper’s mask, the use of the alternate logo in a subtle pattern on the sides is a nice and creative addition to this design that may just make an appearance in St. Louis this season. 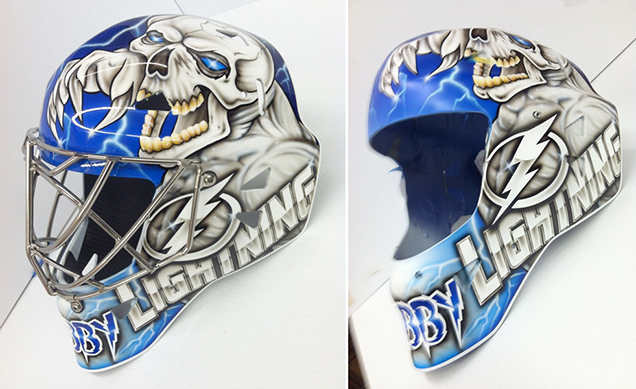 After spending the past 3 seasons with the Islanders, the 14-year NHL veteran signed a contract with Tampa Bay this summer. Despite joining his third team since 2010, Nabby’s masks haven’t changed much since his tenure with the San Jose Sharks.

Continuing to collaborate with long-time artist Todd Miska at Miska Designs in Minnesota, the haunting “skull creature” has been a steadfast element on Nabby’s masks throughout the years. The overall concept of this mask is pretty simple – the skeleton on the side over a backdrop of lightning and Tampa Bay blue. The backplate, while also visually simple, has Nabokov’s number 20 (also the number of his childhood idol, Vladislav Tretiak) centered between the names of his children, Andrei and Emily, and two close friends, Warren Strelow and Anna Gorouven.

Personally, I’d like to see goalies move away from the glowing skulls/gradients/lightning effects to something more contemporary, but clearly something’s been working well for Nabby over the past 14 seasons, so if the skull mask is his secret lucky charm, more power to him. 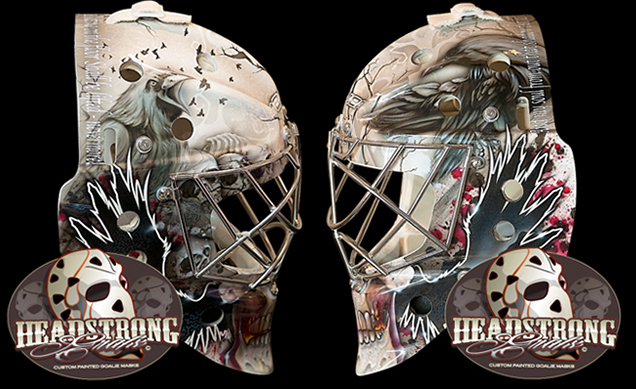 Hoping to build on a promising 2013-14 season with the Flames, Karri Ramo chose to stick with the same theme for his 2014-15 mask. Last year’s look, also created by Jason Livery at Head Strong Graphx, focused on Edgar Allan Poe’s narrative poem, “The Raven” with a scrolling quote across the edge of the mask: “And my soul from out that shadow that lies floating on the floor shall be lifted – nevermore!”

This year’s mask features the same quote but Livery enhanced the shadowy graphics, creating a vintage-like feel. Placed behind the raven silhouettes and blood spatters on the sides are two hyper-realistic ravens, all positioned over a skull motif that covers the entire mask. The Maryland-based artist explained to InGoal Magazine regarding last year’s design, “Ramo really wanted a mask that reflects him and who he is.” This sinister and mysterious design is beautifully painted and stands out among all others in the league.

Painted by another of my favorite artists, David Leroux at Diel Airbrush in Montreal, Hutchinson’s new Jets mask takes just a slight variation of last season’s design. As quoted in InGoal Magazine, Leroux described his design process with Hutchinson; “he really wanted something bold and easy to see from far away, but when you get closer to the mask you start seeing small details.” When asked about this year’s design, Leroux added “he really liked his mask last year so he wanted to keep it clean and simple, old school with a 2014 twist.”

The bold, clean lines of this mask, like with its predecessor’s, will look fantastic from a distance, but the close-up details are also beautiful in themselves. Fixed behind the Jets’ most recent word mark on each side, the mask features traditional-style sketches of World War II-era aircrafts. The chrome maple leaf and abstracted Jets logo ground the design in the center with chrome blue stripes shooting backwards, creating the illusion of speed. This mask really is full of beautiful detail, but also masters the task of creating a design that will work up close and from afar.

What do you think? What’s your favourite new mask announced so far? Let us know in the comments. And if you want to read Part 1, click here.