New goalie buckets are being announced fast and furious, so let’s check out some more new designs that will be debuting this October. If you missed them, or just can’t get enough of looking at all the new goalie masks this season, go back and read Part 1, Part 2 and Part 3. 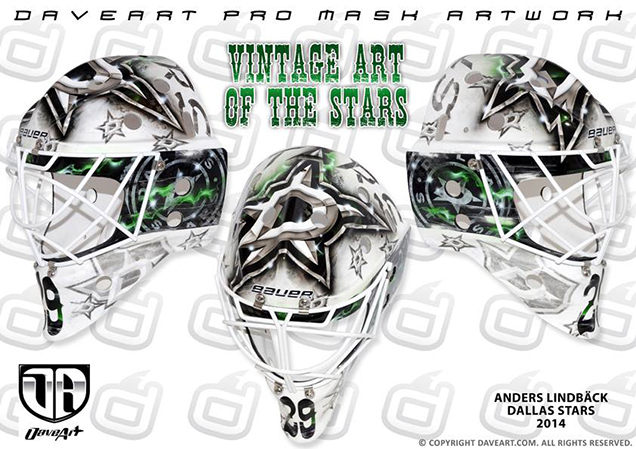 For his first season in Dallas, the former Tampa Bay netminder turned to popular artist Dave Gunnarsson once again to craft a Stars-centric design. Given that Texas doesn’t have the richest hockey history, Gunnarsson was posed with the challenge of fusing traditional southern elements with hockey aesthetics. Lindback’s number 29 sits stenciled on the chin in a western-style font while the rest of the design stays relatively simple and logo-centric.

Inspired by Dallas’ new jerseys (aka the Starbucks look), Gunnarsson describes on his facebook page that this mask has “a classic style with strong contrasts, a design that is a tribute to the passion of hockey. [The] Dallas Stars logo [is] in the middle, and around it, a symphony of detail work.” Predominantly white masks can be challenging given the lack of contrast with the ice, but the details in this design and creative interpretations of the Stars’ logo are well done. 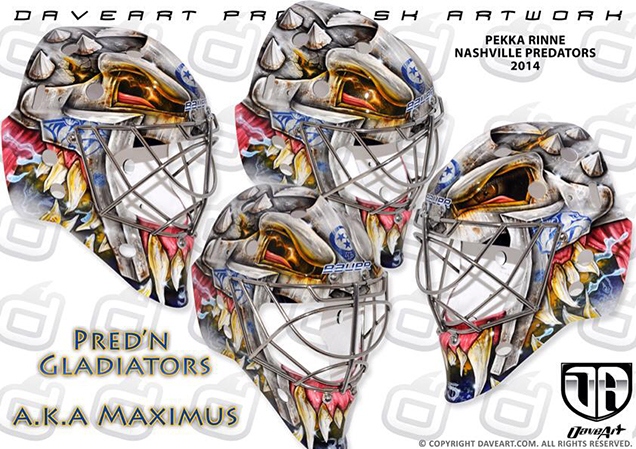 Pekka’s had his fair share of monster masks over the years, and this year was no different. Painted once again by Dave Gunnarsson, Rinne’s 2014-15 bucket takes on a barbarian look, complete with predator teeth around the jaw line.

While the details in this mask are beautifully painted, I have a couple issues with the overall design. First, the amount of subtle detail is challenging to read from a distance. The gray, blue and beige are all a similar shade, making the colors blend together when out of focus.

Second, although this is technically a “predator” theme, this mask has very little of the team brand worked in, aside from the small, blue nashville logos on each side. The main hues that pop out here are the gray and red, neither of which look particularly nice with the Predators’ mustard yellow. Overall, not my favorite mask, but when you pump out as many masks each summer as Gunnarsson has, there are bound to be some misses in with the hits.

Similar in style to Johnson’s Bruins mask from 2013-14, the netminder worked with Dave Gunnarsson once again to craft a mask for his new role with the Islanders. Following almost exactly in the pattern of last year’s design, this mask features large-scale logos on each side with team color pin stripes trimming the edges. The painterly effects in both logos, as well as the smaller logos stamped in the background are beautifully detailed, and as Gunnarsson said on his Instagram page, “it is a strong and crisp and clean design, all built on the cool team logos.”

The real highlights of this mask for me are in the details of the white cage and metallic blue trim. The white looks crisp against the flat finish of the mask, all of which is offset nicely by the shine and intense saturation of the blue. This design is a great tribute to the Isles franchise for their last season on Long Island.

The next iteration of ‘Optimus Reim’ has surfaced, and it’s pretty damn awesome. Artist Dave Gunnarsson has been providing the Toronto netminder with Transformer-pun masks for years now, and this season’s’ looks like it jumped straight out of the Michael Bay film.

The layout of this mask is similar to those Gunnarsson has created for Reimer in the past, but each element in this design has been given the full-on Transformers treatment, from the flames on the chin to the metallic leaves layered on the top, and of course Optimus Prime on the left side.

This mask certainly has a lot going on, but if you’re going to go with a Transformers theme, simple and understated isn’t really an option.

Relatively little has changed on the 2-time Cup champion and Vezina winner’s mask over the last few seasons, but given Quick’s recent success with the Kings, Jonny doesn’t have much reason to change anything. Artist Steve Nash at Eyecandyair has created a handful of battle armour masks for Quick, both for the Kings and the Olympics.

This year’s design takes the armour look to the next level with metallic accents and chainmail texture. This mask combines the best of both worlds aesthetic-wise, maintaining a graphic look while also incorporating hyper-realistic details. To see more of this beauty close up, Steve has posted a 360-detail view video on his Instagram page. 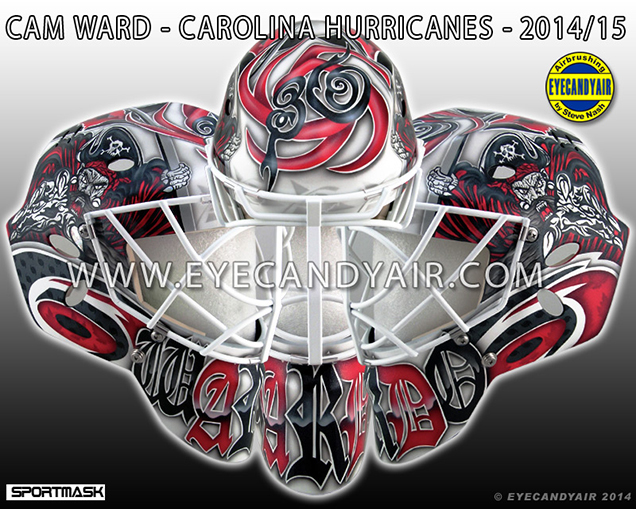 Like Quick and Reimer, Wardo’s signature pirate-theme mask hasn’t changed a whole since it first debuted in 2007. Evolving little by little each season, this year’s Blackbeard mask still  has Cam’s nickname “Wardo” stenciled in his steadfast typeface across the chin with the Hurricanes’ logo on each side.

Artist Steve Nash added more detail in the pirate illustration than in the early years, but it hasn’t changed much since last season. Ward’s number 30 sits on the top in the eye of a hurricane symbol, another consistent element on his masks through the years.

It’s clear Wardo and Nash have found a theme and style that work, and I don’t see Cam’s masks having anything but black and red pirates on them anytime soon.

After a breakout rookie stint in 2013 and a season in the minors, Jake Allen is set to duke it out with Brian Elliott for the Blues’ starting spot this year. Ready to take the big stage is his new mask by artist Jason Livery at Head Strong Grafx. Seemingly a popular trend this season, this mask focuses all on the team’s logos, past and present, to create a collage effect of Blues history.

The wings of the note from the current logo frame Allen’s name and number on the chin surrounded by flying musical notes, paying homage to the city’s musical history. each side features logos from the team’s past, even that beloved trumpet logo that luckily never made its way onto the ice in the form of this jersey. Like all of Livery’s work, this mask is clean, crisp and a great tribute to the franchise’s history.

For reasons unknown, Brian Elliott has embraced his nickname of “Moose” in reference to the Canadian kids tv show by the same name, but questions aside, the moose has made its way into Elliott’s mask time and time again. For this season’s iteration, artist Jason Livery morphed Ells’ helmet into an abstract moose head, similar in style to what Ryan Miller’s worn for the past few years. On the backplate is a moose crossing sign behind a Blues goalie moose (in a Mighty Ducks-style mask, none the less) holding an Ontario “Mr. Moose” licence plate, a nod to the netminder’s home province.

Despite being illustrated in St. Louis colors, this mask doesn’t really scream ‘Blues,’  but it certainly screams ‘Moose.’ If they ever need a hockey player to cameo on the show, Elliot (the furry one) sure knows who to call.

What do you think? What’s your favourite new mask announced so far? Let us know in the comments. And don’t forget about Part 1, Part 2 and Part 3!