The Tampa Bay lightning released their new third jerseys on Saturday. Unfortunately, it’s unspectacular. More than that, it’s like the Lightning went all Tobey McGuire in Spiderman: emo.

First of all, there’s the black. Regular readers of the site will know how I feel about black sweaters. For those who don’t know, when you’re playing a sport on a blank sheet of white ice against the other team which – 99 times out of 100 – is wearing white, black is the least interesting jersey to choose. Think Sharks/Kings from last year’s playoffs. Monochromatic and visually boring. The best thing that came from the Sharks’ epic and historical collapse is that they’ve ditched those black jerseys for good (in the playoffs anyway). See, there’s always a silver lining.

Back to Tampa Bay, the black is certainly a historically-accurate choice for the franchise, which was the colour of their regular jerseys until  2011. But, at least those jerseys had some blue on them. This is almost entirely black, because blue isn’t cool enough, right Tobey? Black is just so, you know, cool, because I’m a moody and deeply emotional intellectual who wants to look more intimidating and cool. Did I mention black is totally cool? Because it’s totally cool. 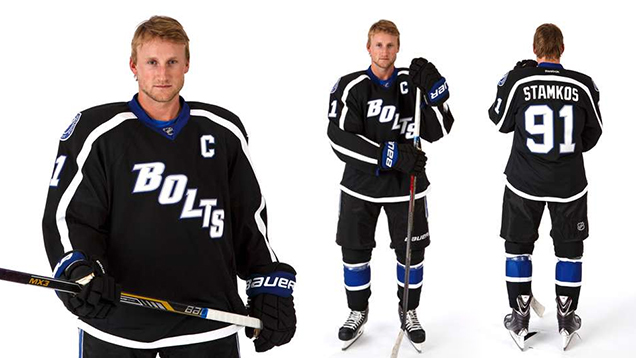 (My apologies if you’re now, or ever were, emo. You’re absolutely free to wear what you want and think what you want, but if you’re playing on a hockey team, emo isn’t really a great look to go for.)

The only blue on these Tampa jerseys are an ultra-thin line on the cuffs, the collar and on the logo patches on the shoulders. Otherwise, it’s all black and white.

Speaking of the white, do those shoulder yoke stripes and thin white line along the bottom of the jerseys look familiar? They should, they’re incredibly similar to the last hockey team you saw on the ice of a meaningful game. Not to say that the Kings own that cuff-to-shoulder yoke outline look (as other teams use it), but they’re the only one to do that exact same thing in a black jersey. Like it or not, it’s like the Lightning are trying to replicate a team they look up to by wearing what they wear. That seems very emo. Right Lucius?

And now we can move to the crest. I’ve never liked the use of nicknames on jerseys, from the Bolts to the Sens. Tampa, your team is called the Lightning. Only sports broadcasters call you the Bolts trying to sounds younger than they actually are. Sorry, you’re not happy with the name you were given? You want to change it to something that seems more cool and clever? That seems very emo. Right Prince?

The only team that’s allowed to get away with that are the New York Knicks. Because no one actually called them the Knickerbockers anyway.

So, these jerseys are a bit of an emotional let-down. At least they were trying to be minimalist with the jerseys, but it went too far in that direction, with nothing here to even get the least bit excited about. Boring, stolen, non-sensical, whatever.

If you need me, I’ll be in the corner, staring broodily at you.

Agree? Disagree? Am I being too hard on emo? Probably. But give me shit about it in the comments below.