This is not a newsflash. These jerseys are not recent announcements. But, I lost track over the summer because where I live: minutes from a lake with multiple beaches with little to no rain, summers can be pretty distracting. But, we’re full force into a new season. So, we’re playing a little bit of catch-up

And the main thing we missed, and haven’t commented on yet, was new jerseys for both the Anaheim Ducks and the St. Louis Blues. 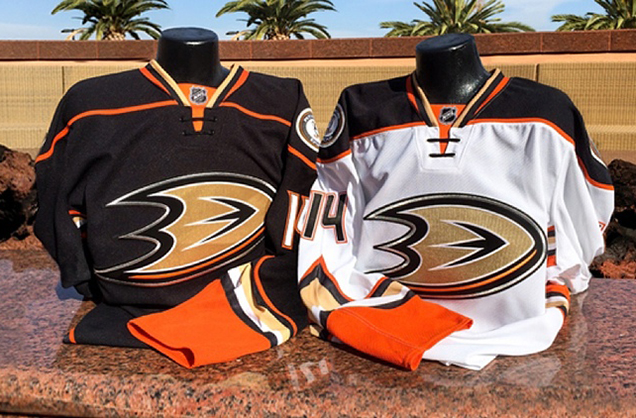 These jerseys finally symbolize the full switchover for the Ducks from their awful logo (which we ranked as the worst in the league) to something moderately better (definitely no longer the worst in the league). Gone is the awkwardly wide logo that didn’t fit well on a jersey, with lettering too small and difficult to read anyway. They’ve already been using the simple webbed-D on their third jerseys for a few seasons, but it’s nice to see they fully take effect from here on in.

But the jerseys are, well, not bad per se. In fact, they’re some of the best jerseys the Ducks have ever worn. The black versions are the exact same as their third jerseys from the last few seasons, which we discussed for the Ducks’ inclusion in the Worst to First series. Here’s what we said about them:

The big minus here though is the extreme multitude of of stripes happening on the sides and sleeves of the jersey, all with varying widths and colours. The simplicity that they had working in the #3 and #4 jerseys on this post is completely obliterated. You can say there’s six stripes on each side: orange, black, gold, white, black then orange. From front to back, that would mean 11 separate stripes. On both sides, that’s 22 stripes. Add in the sleeves (6 on each), that’s 34 stripes. That’s just stupid. Remember the Canadiens’ barber-pole jerseys? That had less stripes. I think most zebras have less stripes.

Seeing as how the new road white jerseys are exactly the same design but with the black and white areas switched, the same complaint applies to both of these jerseys. And the white jersey throws in some black shoulder yokes for good measure…which makes them officially worse than the home blacks, even though Kesler seems to like them. What we also said…

I also have feeling that, now that this logo is now the primary logo, there will be a white version coming out next year, and these will become the primary home and away jerseys.

Hopefully they’ll eliminate some of the stripes when that happens. 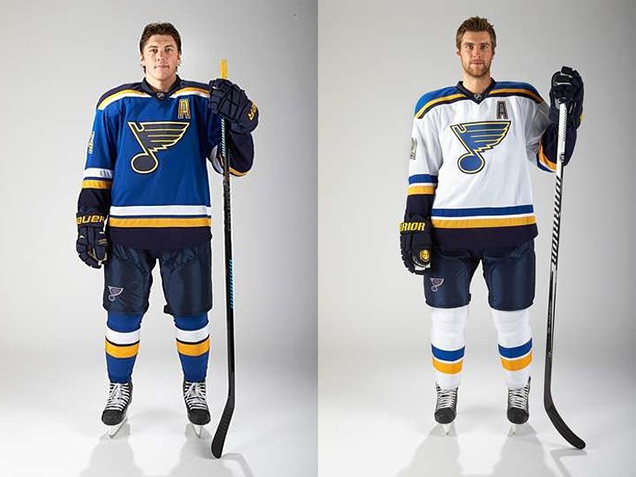 Meanwhile, in St. Louis, the Blues seems to be righting previous wrongs in their jersey design and end up doing a damn fine job of their minor tweaking/revisiting.

When we wrote the Worst to First post for the St. Louis Blues a few months back, it was a bit controversial because there was something great and something wrong with the top 5 jerseys in the list, meaning that each of them could have been fifth, or first. Choosing the jerseys they wore last year as the best they’ve ever worn didn’t sit well with some Blues fans but, like over-plucking already sparse eyebrows, the pickings were very thin.

These jerseys do a fantastic job of taking the elements that worked with all of their previous jerseys and putting them together into a single jersey. These jerseys are most reminiscent of their 1979–84 jerseys, which feature striping on the shoulder yokes on both the home and away jerseys and yellow/white or yellow/blue striping. But, these new jerseys minimalize the 1979–84 yoke striping slightly, which is a great idea because those old jerseys are just too stripy.

The actual pattern of the stripes on the jerseys is closer to their 1998–2007 jerseys, with the darker blue at the bottoms of the jerseys and at the cuffs, and on the striping on the yokes. But these are also minimalized slightly, with strong stripes that are equally sized. Also gone are the angled stripes on the shoulder yokes and sleeves, more like the jerseys they wore from 1984–94.

I never minded the curved piping on their 2007–14 jerseys, but this is completely a more traditional approach to the jersey aesthetic. Having striping on the yokes is fairly unique (only Boston, Columbus, and the Rangers do something similar) and it makes good use of the two tones of blue in the team’s branding. So, it’s both traditional and somewhat unique to St. Louis, which usually makes for a great design.

And really, both jerseys in their entirety make good use of the two tones of blue. The darker blue is primarily kept to the edges of the jersey, which allow for the multiple colours to not be distracting and keeps the focus on the crest in the middle. The best thing the franchise has ever done is drop the red from their branding, which they used from 1984 to the mid-90s monstrosity of a jersey.

And because it’s not all about the jerseys, those socks are great. Simple, solid, classic.

If I were to re-write that Worst to First Jerseys post for the Blues, this would easily takeover number one.

Agree? Disagree? Don’t care anymore because it’s been too long? Let me know in the comments below!