The NHL’s recent abundance of outdoor games has not only brought us back to the roots of hockey (or to some foreign land of palm trees, pyrotechnics and KISS) but it’s also brought us quite a broad spectrum of new design concepts. Between the uniforms, equipment, logos and branding, we’ve seen everything from classic throwback jerseys to shiny chrome and even a goaltender disguised as a traffic cone, but the Winter Classic and Stadium Series games also bring the opportunity for new goalie mask art.

For the 2015 Winter Classic, we’ve already seen each teams’ uniforms – Chicago’s basic whites and Washington’s throwback reds – but the Capitals and Blackhawks recently revealed the masks their netminders will be wearing in Washington. 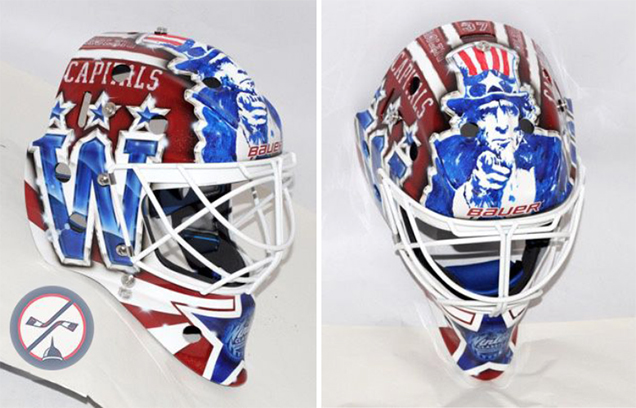 Matching with their historic throwback jerseys, Holtby and his regular artist Dave Gunnarsson pulled inspiration from legendary Washington netminder Olaf Kolzig in name, number and design. “Braden had such a cool idea,” Gunnarsson shared on his Facebook page. “He told me he wanted to pay tribute to the greatest Capitals goalie, Olaf Kolzig. The design is inspired by Olaf Kolzig’s early clean design from the 90’s, created by Dennis Simone. Me and Braden transformed it into a clean cut Winter Classic design.” Keeping with the themes of retro Caps hockey and the patriotism of the nation’s capital, Gunnarsson used the same primary elements and color scheme as Olie’s mask, but added new elements like the team’s Winter Classic logo on the side and Kolzig’s name and number stenciled on the top.

As with all visual components of the league’s outdoor games, the graphics need to be visible even from the cheap(er) seats in the upper levels of the park. Gunnarsson did a fantastic job of balancing his signature hyper-detailed style with bold graphics that will read from a distance while paying homage to one of the franchise’s greatest goaltenders. As Gunnarsson mentions in his explanation, “[from] a distance it is a clean cut design in total harmony with the Winter Classic uniform, and the closer you come, the more details you will discover.”

Holtby is also likely to be wearing vintage brown pads after practicing in them with his ‘Classic bucket – another nice component to round out the throwback trifecta.

For those of you with EPIX, Gunnarsson’s studio was also featured on the new series, “Road to the NHL Winter Classic,” giving a behind the scenes look at the creation of Holtby’s mask. 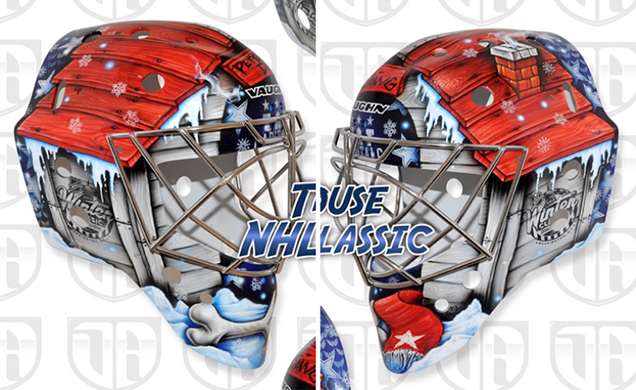 Also crafted by Swedish artist Dave Gunnarsson, Justin Peters’ mask takes a new spin on his usual canine-theme by taking the “dawg” outdoors. Gunnarsson also created Peters’ regular-season mask, with a different spin on the dog-theme. “In junior, my nickname was Pete-Dawg,” Peters explained of his regular-season bucket. “Every helmet I do, I always keep the dog and then change the different themes.” On his studio’s Facebook page, Gunnarsson described the process behind theming Peters’ Winter Classic mask. “Since it is the Winter Classic and it is so cold outdoor[s], the Dawg wants to be indoor[s], so we transformed Justin’s mask into a warm dawghouse… You can also find the Dawg’s breath in the cold air coming out from the opening in the front and parts of his winter scarf, of course with a Caps design.”

While the outdoor idea and color scheme here are spot-on, the boldness and vintage feel of Holtby’s mask work much better for this kind of event. As we saw with Washington’s jerseys, the historical references and nods to the city really make the design the success that it is, and this mask simply just doesn’t have that. Much of the beauty of this design also lies in the details, from the wood grain in the doghouse and snowy landscape to the icicles and bite marks on the bone, and those subtleties just won’t read from hundreds of feet away.

Airbrushed by Crawford’s regular artist, Stephane Bergeron of Griffe Originale in Quebec (also the man behind the now-famous missing mask) Crow’s mask design very closely mimics the classic lines of Chicago’s Winter Classic jerseys. In a recent feature on the EPIX Road to the Winter Classic tv series Bergeron described his design process in selecting an artistic style for this kind of event. “For the Winter Classic, the theme of the mask is a vintage look, because they will wear a special jersey for that game, from the 1957 season, so instead of doing very detailed designs, I will keep it very simple, sharp lines, logos on each side.”

Like with his opponent Braden Holtby’s mask, Crawford’s design is clean and bold, a concept Bergeron understands being a goaltender himself. “It’s an outdoor game,” he explained, “when we were young we were playing a lot of games outside, [and] paint jobs were very simple and easy to see from afar.” The large scale of the feathers, logos and numbers allow the designs to be legible even at a distance, you know, like that thing the Sharks and Kings are trying to go for with the numbers on their Stadium Series Jerseys.

To see more details of Crawford’s mask (and Holtby’s) check out the full EPIX feature on NHL.com. 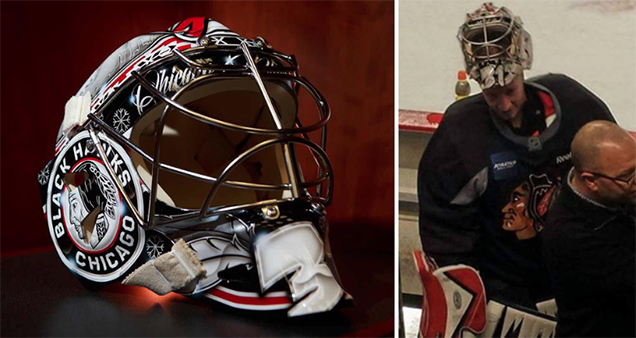 Before the team revealed both of their goaltenders’ masks on the Blackhawks Blog just days before the big game, Raanta took to twitter a bit early to give us a sneak peek at his mask and gear setup for the Winter Classic. Raanta has long worked with goalie-turned-artist and fellow Finn Joni “Bona” Hallikainen to create his masks, and this iteration for the Winter Classic captures all the charm of winter and hockey in the great outdoors.

A silhouette of the Chicago skyline sits around the top above a retro fair isle pattern and Chicago’s alternate “C” logo, surrounded by snowflakes and other wintry details. The mask is almost entirely monochromatic with the exception of the red accents in the fair isle and the trim around the logo and the chin of the mask. Raanta, like Crawford, wanted to stay basic for this kind of event. “My mask has all three of the logos that we have on it,” he shared in a recent blog post on NHL.com. “It’s a simple one, but a little bit special for the Winter Classic. There’s a skyline of Chicago. A lot of people like the mask and I can’t wait to use it.”

Seeing that the Hawks’ jerseys are so bland and monochromatic, it would have been nice to see some more red on Raanta’s – and even Crawford’s – mask, but the crispness of the black will add some much-needed contrast, against the white of the jerseys and the ice.

What do you think of the Winter Classic masks this year? Let us know in the comments below.