If you’ve been following our mask roundups (if not, you can catch up here (Ed note: and you should, because they’re awesome)), you may have noticed some variation in the frequency in which different goaltenders change their masks. Some will have multiple in one season while others find a design they like and stick with it for years at a time.

If anyone knows about sticking with what works, it’s Bruins goaltender and 2014 Vezina winner, Tuukka Rask and his artist, Ron Slater of Slater Lettering and Graphics. Based out of Woburn, Massachusetts, Ron has worked with everyone in his 16-year career from NHL legends Olaf Kolzig, Curtis Joseph and Mike Richter to current players like Rask, Anton Khudobin, and US Olympian Jessie Vetter. A veteran in airbrushing, Ron was gracious enough to provide us with some insight into his career path, design process and what it’s like to work with one of the NHL’s best netminders.

Growing up in a racing family and playing street hockey as a kid, Ron’s interest in airbrushing began as a hobby and organically evolved into a full-time job. Over the course of just a few years, Ron had begun his career designing masks, vehicles, and as declared on his website, “pretty much anything else we can paint.”

“I was always an artist growing up,” Ron recalls. “You know, you have other people who want to be a veterinarian or a nurse or a firefighter… I wanted to be an artist.” Although his career aspirations didn’t always include painting masks for NHL greats. “The goalie helmet part kind of happened by accident,” he admitted. “Every time someone would buy a plain white street hockey helmet, they’re like ‘oh, give it to Ronnie, he’ll paint it up.’” From there, a business was born, as word spread and Ron was soon painting masks for kids in other neighborhoods and towns, as well as local high school players.

After high school, Ron attended a 2-year art course to hone his airbrushing skills and continued to grow as an artist through trial and error. Through the local goalie mask community, he connected with mask builder and fitter Dom Malerba from Pro’s Choice Goalie Mask and began a partnership painting masks that Dom was building. Through working with Dom, Ron earned his first NHL client, Olaf Kolzig. “It was nerve-racking and exciting at the same time,” Ron remembers. “Working on that paint job, it took me more than 40 hours…I was going as slow as I could, making sure I didn’t mess anything up.”

Despite the first-time jitters, working with Zilla was a positive experience for Ron. “He already kind of had the idea and the nickname already, so at that point it was just working little details and changes in. Since the design was established, we didn’t really change anything…it was pretty much the same mask through the rest of his career in Washington and the last couple years in Tampa Bay.”

Early on in his career, Ron admits he would stay glued to ESPN to catch any glimpse of his work on TV, but after more than a decade in the business, the novelty has worn off a bit. Even while watching his hometown Bruins and seeing his work worn by Rask night in and night out, “other people make a bigger deal of it than I do,” Ron laughs. “It’s turned into more work than the excitement of doing it for the first time, but I’m not complaining in any way. I still think it’s the coolest job I could have.”

A Bucket for a Bear

Ron first made his connection with the Bruins netminder when Rask was dealt from Toronto. When he and Dom Malerba first learned of Tuukka’s arrival in Boston, they put their heads together to create something that Rask would fall in love with. “‘We gotta do something to sell him on the mask,’” they conferred. “‘We gotta make that paint job really pop…’ I was like ‘well if we’re going to gold plate the cage, we might as well do the bear in a 23-karat gold foil,’” and from there, the rest of the details sorted themselves out bit by bit.

Their hard work soon paid off when Rask laid eyes on the helmet for the first time. “Bauer had dropped off some gloves and pads for him to try out, and he was playing with those for a second, but when Dom pulled the mask out of the bag, he dropped everything and it was all about the mask. Since then, it’s pretty much been the same design.”

Like many goaltenders, Rask has been a bit hesitant about changing his trusted design. “Part of me wants to do something different for him,” Ron explains, “but I think he’s kind of superstitious about stuff and doesn’t want a change either… I just try and make sure I keep him happy!”

The process with each player varies and is different from the next. “Some are easy to please. They just say ‘use my team colors and the logo,’ and they leave it to me to make up something and make it look good. On the opposite side of the spectrum, I have some goalies who will come to me with more than ideas. They’ll have actual drawings of what they want to do, and it’s just a matter of me putting it from paper to paint and copying it over exactly the way they want.” More often though, the design process becomes a balancing act. “Most of the time it’s in the middle,” Ron says of his experience. “I kind of take their ideas, let them soak in a little bit and put my own spin on it to meet them halfway.” 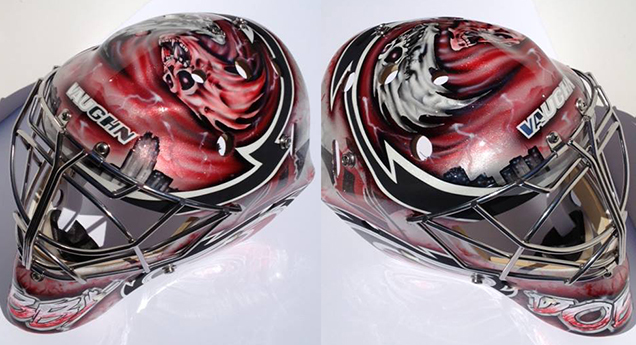 A Family of Masks

Looking to future projects with Rask, Ron is now in the early stages of brainstorming ideas for when the Bruins host Montreal in the 2016 Winter Classic. While the actual painting process won’t start until about a month before the event, Ron and Dom Malerba have begun tossing around some ideas to get the gears turning. “Because it’s going to be at Gillette Stadium, we’ll keep it Tuukka’s mask but maybe put a Patriots spin on it.”

Pulling inspiration from the venue has become a common theme among goalies’ masks for outdoor games, even dating back to Rask’s own 2010 Winter Classic mask (airbrushed by artist Luke Dobie) that mimicked the landscape of Fenway Park, used a Red Sox-inspired font for his name, and even featured the Bruins bear shredding a Yankee jersey with its teeth. Some of Ron’s other ideas for the big game in Foxborough include doing a split half-Bruins and half-Patriots design or incorporating the Pats’ four Lombardi trophies, but all that’s to be determined around summer time.

While Rask may be Ron’s most recent marquee client, each and all of the masks he’s worked on over his 16-year career hold a special place in his heart. “To me, each one’s like a baby to me. It’s like asking a parent which child’s your favorite,” Ron chuckles. “Each one has something special about it.”

Kolzig’s mask stands out in Ron’s history as an artist for being the first, while working with Rask – the goaltender for his hometown team – is also special in its own way. Ron also painted US Olympian Jessie Vetter’s mask, which held it’s own sentiment for Ron, representing his country on a worldwide stage in Sochi. “I’m not playing for my country, but just watching the games and seeing a part of me, I feel pretty proud.”

With everything Ron’s accomplished as an artist, he attributes most of it to patience and practice. “If I was asked how many times I’ve learned from a mistake, I’d have no idea what to tell you.” He advises aspiring artists to step out of their comfort zone and not be afraid to take chances. “Pretty much everything I’ve learned was from trying something, messing it up, and doing it over a different way.” Ron recounts using hundreds of different airbrushes, watching numerous YouTube videos, and observing many other artists’ techniques all as contributors to his own professional growth. “It’s just kind of being a sponge to the world, seeing how someone does something, and trying to soak it up as much as you can.”

From the Bruins upcoming Winter Classic and beyond, we’re sure to see plenty more of Ron’s work on the college, professional and international stages to come. “I feel lucky that I get to do it every day – I have fun with my work, and I just feel blessed.”

Many thanks to Ron again for taking the time to talk with us! To keep up with Ron’s work, follow him on Twitter at @MaskPaint and like his studio’s Facebook page, where he has a huge portfolio of his work.