It was on this day, February 20, 2014, that HbD announced the opening of a store selling awesome hockey-related posters. Since then, we’ve added dozens of new designs to the store and we’re going to keep adding more throughout the day, so stay tuned and keep checking back here, or Twitter, or Facebook.

That’s not all! Almost all of the products in the HbD Store will be 20% off! If you’ve been eyeing the History of Hockey Poster, or the posters celebrating some of the greatest play-by-play goals ever, or love your team’s addition to the Vintage Poster series, now’s the time to get them.

The sale has now ended, but the new posters below are, of course, still available!

“This is for you Kings fans, wherever you may be. All the frustration and disappointment of the past is gone. The 45-year drought is over. The Los Angeles Kings are indeed the Kings of the National Hockey League. They are the 2012 Stanley Cup Champions.”

Created in conjunction with The Royal Half, the Los Angeles Kings get their own play-by-play poster, celebrating the night they won their first ever Stanley Cup in 2012. The play-by-play is by Bob Miller, iconically putting a verbal end to 45 years of frustration for Kings’ fans. Click here to purchase one for yourself! 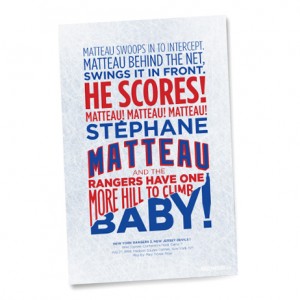 The New York Rangers get their turn for a play-by-play poster, celebrating the night they won their excruciating 7-game series against the NJ Devils in overtime, on their way to the 1994 Stanley Cup Championship. The play-by-play is by Howie Rose, visualizing the iconic moment in Rangers’ history. Click here to purchase one for yourself! 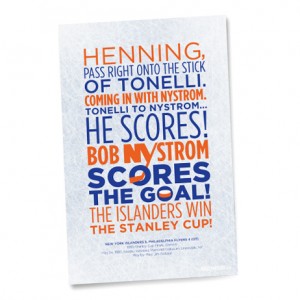 “Henning, pass right onto the stick of Tonelli. Coming in with Nystrom. Tonelli to Nystrom…He scores! Bob Nystrom scores the goal! The Islanders win the Stanley Cup!”

The New York Islanders get their turn for a play-by-play poster, celebrating their very first Stanley Cup Championship in 1980, with a classic OT goal against the Philadelphia Flyers. The play-by-play is by Jim Robson, and it was very convenient of Nystrom to have an “NY” in his name, no? Click here to purchase one for yourself! 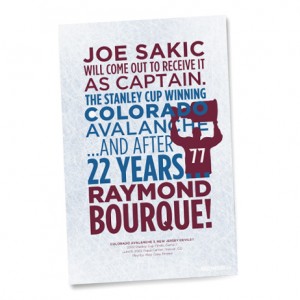 “Joe Sakic will come out to receive it as captain. The Stanley Cup winning Colorado Avalanche…and after 22 years…RAYMOND BOURQUE!”

The Avs get their turn for a play-by-play poster, celebrating their second Cup Championship in 2001 over the NJ Devils, and of course, making Ray Bourque’s dreams come true. The play-by-play is by Gary Thorne, with the now iconic call. Can you spot the Colorado flag reference? Click here to purchase one for yourself!

Do you have suggestions for iconic play-by-play calls that you’d like to see made into a poster? Those calls that still give you shivers when you watch them, years later? Let us know in the comments below.