Ahhh, Valentine’s Day. The holy grail of the chocolate and jewelry industries. This will mark the fourth year that I will not be getting a ring for my amazing, and certainly deserving girlfriend (cue sad violins)…maybe someday. However, there is a group of people who do get rings every single year and that is the winning team of Lord Stanley’s Cup. The complimentary rings have come a long way over the years and in this special edition of ‘Top 5’ we are highlighting the NHL’s Best Bling. 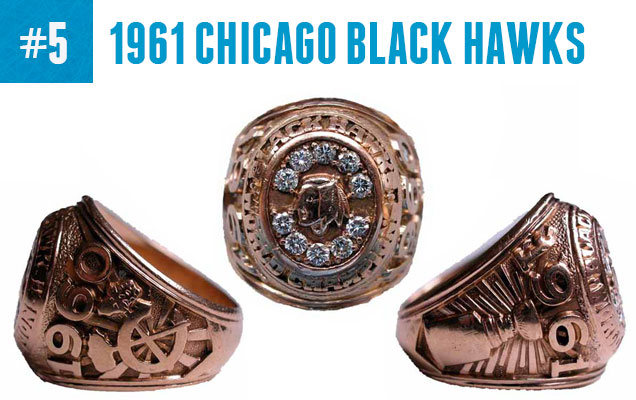 This ring is the best of the ‘old school’ rings, featuring deep gold engravings with a modest 10 diamonds surrounding the Blackhawks logo on front. The simplicity of this design is why it made the list, with the Stanley cup on one side and the Blackhawks alternate logo on the other side (something you don’t see on many Stanley cup rings). This is a no-nonsense tribute made for only the manliest of men. I would literally be honored to be punched in the face with this ring. 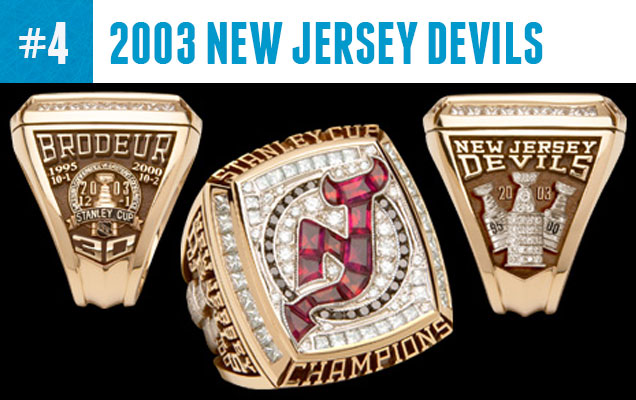 The Devils celebrated 2003’s championship with a top-notch ring featuring their primary logo made out of rubies nestled on a bed of diamonds. The front is contrasted by the gold engraved sides featuring the 3 Stanley Cups won by the Devils, one of which is subtly engraved with miniature diamonds. Finally, the opposite side displays the 2003 Stanley cup logo, which is also infused with mini diamonds. It’s hard to believe that the Garden State produced both this classy ring and the Jersey Shore television show in the same decade. 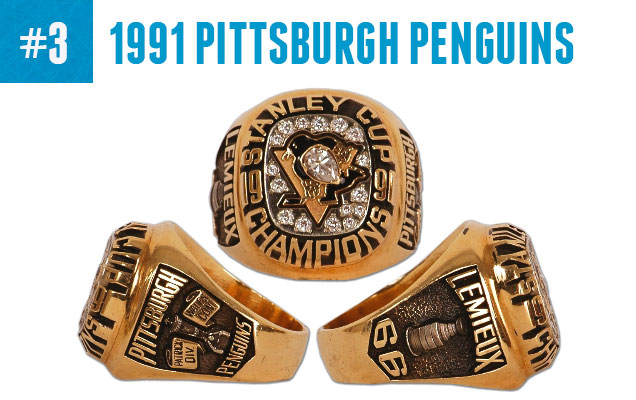 The Penguins 1991 Stanley Cup ring may be the best infusion of diamonds into a team’s logo that currently exists. The iconic skating penguin’s white belly has been replaced with a big glorious diamond complimented by a circle of 16 smaller diamonds. The gold engraved sides feature a handsome relief sculpture of the Stanley cup and alternately, the Eastern conference Prince of Wales trophy. This is a classic championship ring with just the right amount of bling. 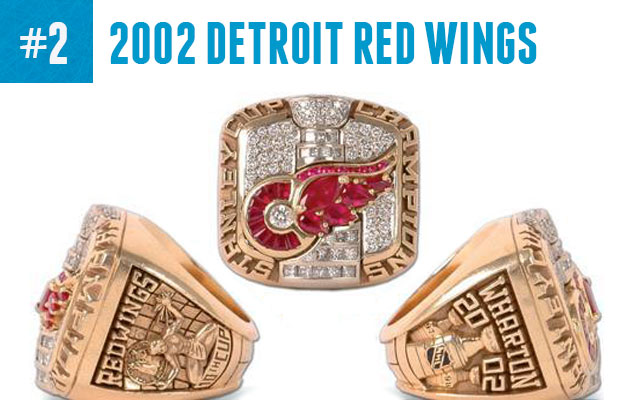 It could be that having one of the NHL’s best logos makes it easier to design an amazing championship ring. Detroit’s 2002 championship marks their 10th Stanley Cup win and they went all out for this one! The front features the winged-wheel made from overlapping rubies, peppered with small diamonds throughout the feathers. The logo sits in front of a platinum encrusted Stanley Cup trophy. The sides feature 3 cup trophies with an black NHL logo and alternately, the stamp of the city of Detroit bordered with ‘Redwings’ and ‘10thCup’. This ring is a real head turner, of which I would not recommend wearing in some sketchier parts of Detroit city. 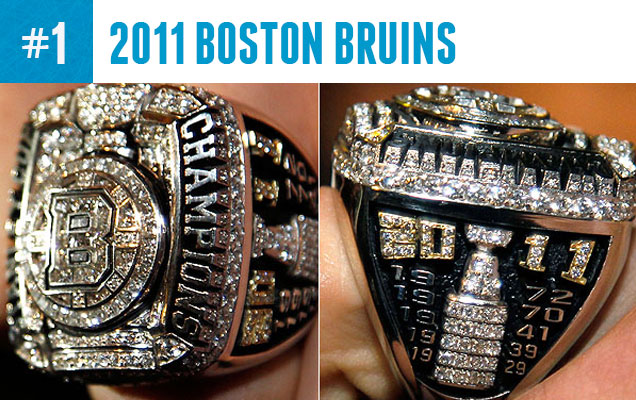 Though a relatively recent addition, The Bruins 2011 Championship ring has already become legendary. This ring takes the concept of bling to a whole new level. With a mind-blowing 302 diamonds, this blinding national treasure is the Beyonce of sports accessories. The side features an equally blinged out Stanley Cup trophy and an orderly list of their previous championships. On the opposite side is a gold engraving of their alternate bear logo highlighted with 3 diamonds on each side. This breathtaking ring has set the bar so high that I think the league needs to transition from rings to rapper-style chain necklaces…you know, so we can fit more bling.

Agree? Disagree? What’s your favourite NHL bling? Let us know in the comments below.