Let’s just say, at the very beginning, there were a ton of great jersey match-ups this year. A huge amount of classic red-versus-blue match-ups. Some more contemporary match-ups, like red-versus-yellow. Not only has this NHL post-season been an absolute pleasure to watch, but it’s been a pleasure to see as well. But some of the jersey match-ups had to suck, right?

Of course. Sometimes a great jersey can be diminished by how it’s playing against. Sometimes mediocre jerseys are elevated, simply because it creates an interesting dynamic when beside their opponent’s jerseys. And sometimes, two great jerseys can just bring each other down.

So, what were the best jersey match-ups of the playoffs? Let’s count them down for you.

Both of these teams feature jerseys that have an excessive amount of stripes on their jerseys, especially on the sides. Neither jersey is among the very good ones in the league, which doesn’t make this the best match-up to look at. It doesn’t help that both teams are just the same tone: red/orange. When the only break for the same tone is beige (in the Ducks’ logo), you know you’ve got a problem. And then there’s the Ducks’ black jerseys, which doesn’t make for very exciting aesthetics on the blank white canvas of a sheet of ice.

It’s a lot of black-and-white with a slap of red for the games played in Calgary. Except for all those stripes! Gah! 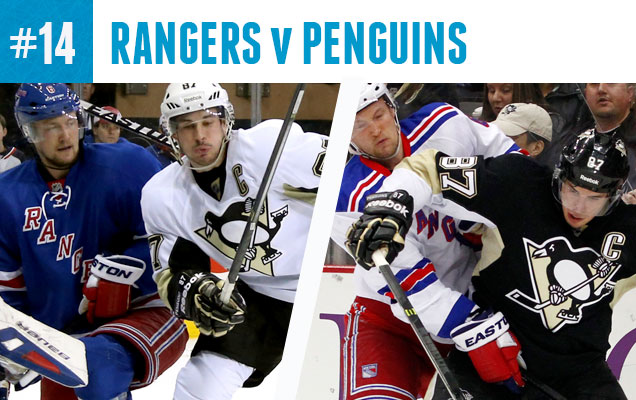 Another match-up involving a black jersey, which of course belongs to the Penguins, knocks it down the list, despite the awesome Vegas gold and the legendary Blueshirt jerseys. What’s wrong with black? In Pittsburgh, the games will be predominantly white versus black, making for a boring aesthetic on the white ice. The games in Madison Square Garden, however, will be lovely. Lots of blue and red and gold.

It speaks to how good some of these match-ups are that one involving one of the most iconic jerseys in hockey is second-to-last. And ‘The Bruise Bowl’? Black and blue. Get it?

Except for the small amount of green in the Blackhawks’ logos, every colour in this match-up falls on the warm side of the colour spectrum: red, orange, beige, yellow, brown. And while I like that idea, and the match-up was extremely entertaining, this uniform match-up still falls behind. The Blackhawks are holding up their side of the bargain with one of the best uniform sets in the league, but between the Ducks’ black homes and their super-stripey hot mess of a uniform set, it just can’t compete.

Again, it shows how good these match-ups were overall when the Blackhawks fall this far behind. 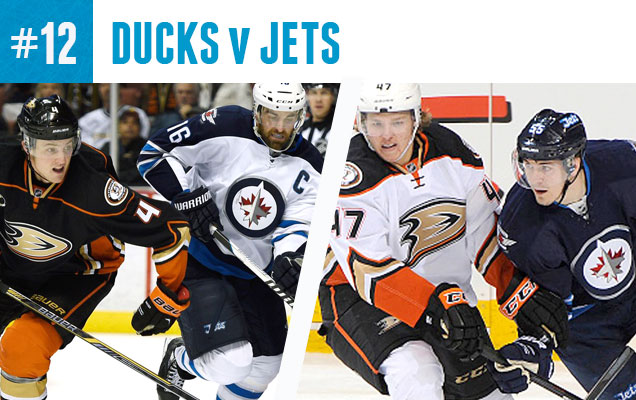 I wanted to rank this match-up between Selanne’s former teams a little higher, but the best part of this match-up are the complimentary colours: blue versus orange. There’s a lot of potential for greatness here, if not for a couple things. The Jets’ navy blue is just too dark and reads almost as black. And the Ducks had – with the Penguins – the only black jerseys in the playoffs. The beautiful blue trim on the Jets’ jerseys against the orange trim on the Ducks almost makes up for it, but it’s just there’s so many other great match-ups happening this year to bump it up any higher. 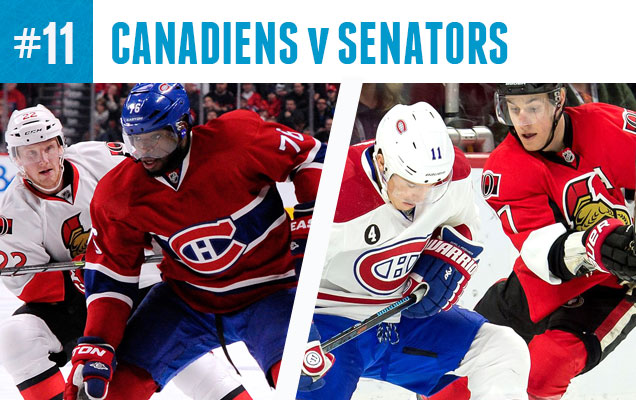 All you see is red! The iconic Habs jerseys are ranked this low predominantly because it’s going to be red versus white in every game, so as great as the jerseys are, it’s not going to be very diverse from an aesthetic perspective. And it’s not like the Sens have the best jersey/logo set either, so they’re not in any position to bump them up the rankings with their own design.

The most iconic jersey of all time ranked this low? You know good ones are ahead…

It’s pretty much the opposite of the Rage Bowl – aside from the Rangers’ red pants and other uniform accents, this match-up is completely blue. That might make for a bit of a boring match-up in someways, but both of these uniforms sets are excellent. The Rangers’ are among the most iconic in the league, while the Bolts’ modern and minimalist look is solid.

They’re both fantastic jerseys on their own, but in a match-up, there’s not enough diversity happening to rank it much higher. 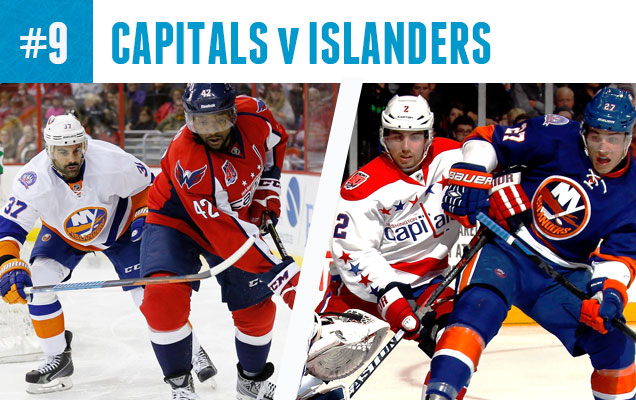 This is the first of many classic red-versus-blue match-ups that happened in this year’s playoffs. The Islanders have gone back to their simple, bold and iconic blue/orange jerseys in recent history – a great choice. The Capitals have their oddly striped home uniform and brought in their ’80s jerseys for the road. Their both solid jerseys, but only get #9 on the list because, well, there’s just better combos ahead of them. If nothing else, hope you enjoyed the last games to happen at Nassau Coliseum, with it’s weird high-contrast lighting that creates stunning photographs. And that quadruple OT? Unfortunately, that never happened, and one of the games had one of the shortest OT games in history, lasting only 15 seconds.

A jersey note, apparently each team is forced to decide what home and away jersey they’re going to wear throughout the playoffs before they play their first game. Which is why the Capitals only wore this, their third jersey, on the road. 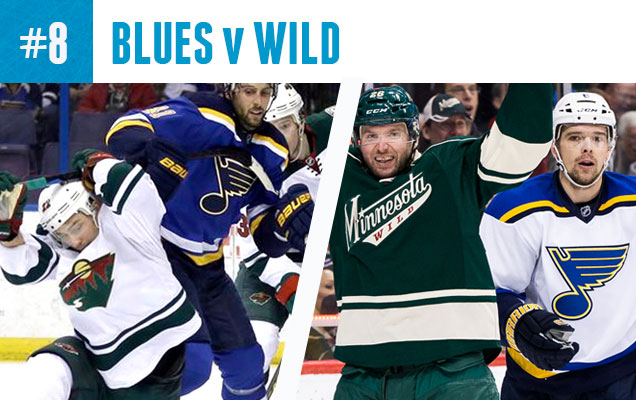 Both teams have upped their visual games recently, with the Wild introducing some truly fantastic road jerseys and having a truly great alternate jersey (which they wore for all their home games). The Blues, on the other hand, have finally figured out how to bridge the jersey history with a modern design and created one of the best home-road jersey sets in the league. It’s not your classic red versus blue that generally dominates the league, but there definitely won’t be a shortage of colour on the ice with either of these teams either, with blue, yellow, green and red all getting some play. The only bad thing, Minnesota’s green is just a tad too dark.

Oh, and by “Finally-Figuring-It-Out Bowl”, I obviously meant the Blues finally developing great jerseys, not figuring out how to get past the first round, amirite? 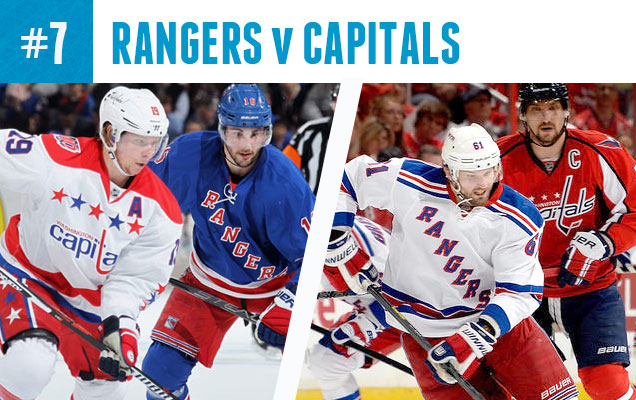 Red, white and blue everywhere! Another classic red versus blue match-up! What I would have loved to see in this series (and most of the series, wherever possible) is to have both the Rangers and Capitals use their home jerseys, so it would be a true red versus blue match-up (like the 2014 Winter Classic), but that’s not going to happen because…well…not sure why. THIS CAN HAPPEN PEOPLE! JUST DO IT! But both these jerseys are heavy in both red and blue striping, which will play nicely off of each other. It was a fun match-up to watch, both aesthetically and in quality of play. 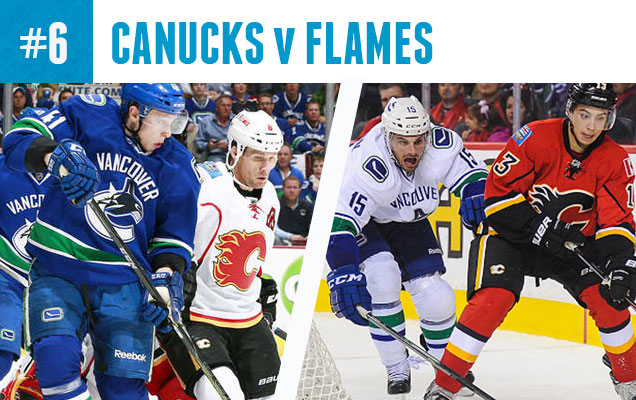 Another classic blue versus red matchup, but with some yellow and green thrown in for good measure. I’ve said it before, but Vancouver has one of the best home-road jersey sets in the league, with the perfect amount of green trim to compliment a beautiful shade of royal blue. They look good whenever they play, including when they wear those awesome Millionaires jerseys. When playing Calgary, the combination of red and yellow gives the faint impression of orange, the complimentary colour to blue. So, you’ve got the fiery red/yellow against the calming blue/green. It was fantastic to watch. Except for the Corsi-challenged Flames winning part. That kind of bummed me out. 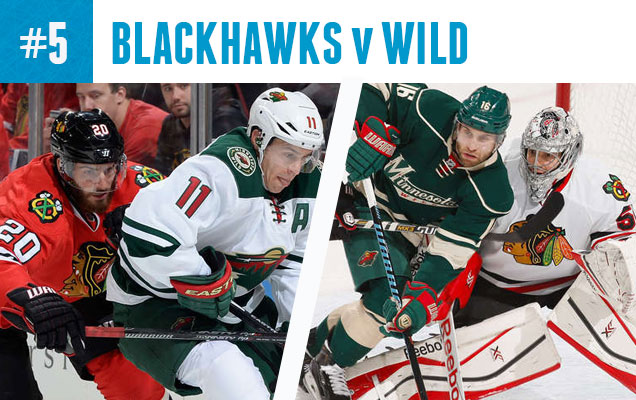 The playoffs are pretty much Christmas-time for any hockey fan, but this is taking it pretty literally, with this series featuring only red and green jerseys. That being said, these are some of the nicest jerseys sets in the league, with the iconic Blackhawks jerseys and the clean, modern Wild jerseys. The better games to watch will be the ones in Chicago, since the Wild’s whites have a healthy dose of green on them to make things aesthetically interesting.

But, I’d love it more if they would just wear their coloured-jerseys all series long. They can do this. Let’s start harassing the league to start doing this in the future. By the way, I’ll just keep saying this over and over again until it happens. 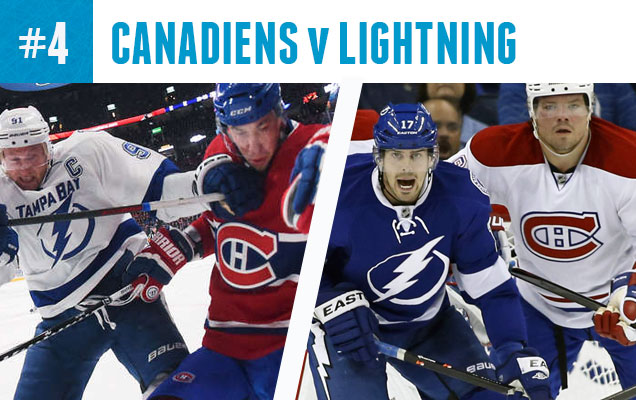 Another match-up that features red versus blue. And these are two really clean, simple, strong uniforms competing, with the modern and simple Lightning uniforms against the iconic Canadiens set. Not too much to complain about: iconic, classic visuals. Oh yeah, here’s something to complain about, both teams should have worn their home jerseys all series long. It would have been fantastic. 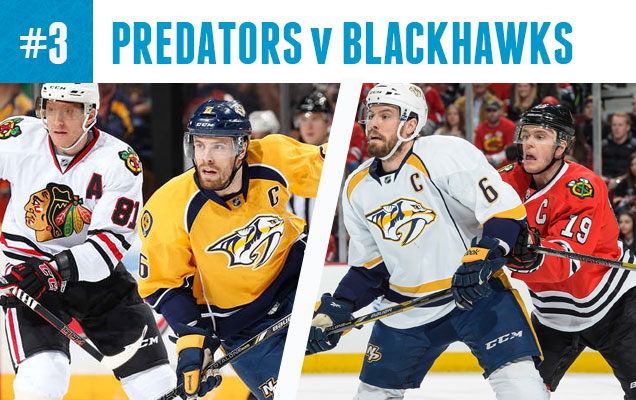 The beauty of this match-up is having the best historical jersey sets in the league (Chicago) against one of the best modern jersey sets in the league. Say what you want about the mustard yellow, but the Preds own it like nobody else, and currently have the only yellow jersey in the league (and yes, I’m denying the existence of that awful Sabres’ turd burger, which thankfully will disappear now that the Sabres’ season is over). Visually, it’s a more unique match-up as well, with yellow/blue against red/black. Excellent classic design versus dynamic modern design. It’s a good example of how non-classic colours can create some excellent aesthetics on the ice.

And yes, they could’ve worn yellow versus red the whole series long.

That can be a thing, right?

Another red-versus-blue match-up. Another example of classic design versus modern design. Another example of how much better a series could be if the NHL allowed colour-versus-colour all series long. Both jerseys are excellent design specimens, for totally different reasons. The Blackhawks have uniforms that are undeniably iconic and classic, but much more busy and seemingly cluttered than the Lightning uniforms, which are modern, simple and – like the Leafs – elegant in their simplicity. The only negative at all, that kept it out of top spot? Not enough red on the Blackhawks’ road uniforms.

It’s tough to compete with a classic red versus blue match-up in the NHL. Some of the most iconic and stories rivalries in hockey have been this way: Habs vs Leafs, Leafs vs Red Wings, Blackhawks vs Rangers, Habs vs Nordiques, etc. It’s got a long history of entertaining hockey and visually, nothing else compares. And both these teams embrace a single colour scheme. Tampa only has blue, Detroit only red. Simple, iconic, stunning. It was beautiful to watch these two teams battle.