The Finals are now upon us. After going another average .500 in the Conference Finals (called the Hawks, missed on the Bolts) team branding is still winning at 8-for-14, so no matter what happens, we’ll be above .500 in postseason predictions. That’s better than most monkeys, but not as good as some octopi. Here’s the final one of the postseason, but make sure to catch up on the previous rounds, if you missed them.

And on top of that, the match-ups are going to be ranked according to which will be the best to watch from an aesthetic standpoint. Since there’s only one match-up in this round, it’s pretty much a default top spot this time. 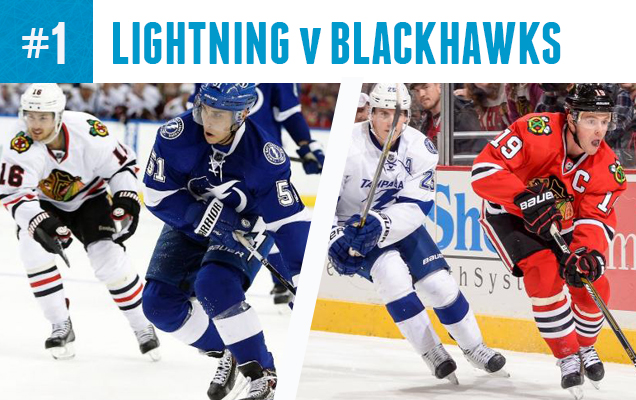 This post-season, there’s been a ton of classic blue-versus-red match-ups, so it’s fitting that these two teams are playing in the finals, representing what could be the best red-on-blue matchup yet.

What makes it more interesting is that it’s also a traditional-versus-modern uniform matchup. The Blackhawks uniforms are quintessentially traditional, wearing what they’ve been wearing since 1955 (with some minor changes) and what is generally regarded as some of the best home/away uniforms in the league. And we’d agree. The Bolts, on the other hand, are perfect examples of modern minimalism in uniform design. One colour. One solid stripe on the sleeves and legs. The only diversion is the classy lightning bolt in place of a stripe on the side of the pants.

These are two excellent jerseys/uniforms and all the game will be a pleasure to watch. But you know what would be better? If they just wore these uniforms the entire series. Colour versus colour jerseys have been happening more often in other sports. There’s no reason it can’t start happening in the NHL.

Tampa Bay may have righted their branding ship recently, but it’s still not completely steady, particularly the overly-simplified and corporate-looking logo. And those new third jerseys are pretty inexcusable considering the superiority of their regular jerseys, and their previous third jerseys aren’t much better. And if we start diving back too far into the past, hoo boy. And their past logos have offered some pretty horrendous and illegible typography. Sure, they’ve had some on-ice success, and for a southern-US team, they’ve built a tremendous fanbase and lots of community support, but they’ll be in tough against this opponent.

The Blackhawks’ logo ranks at #7 in the league, which is very decent, but they also have one of the absolute best jerseys in the league, both home and away. They have history (as the logo hasn’t changed at all since 1964, and the same concept since their inception in 1926), the Madhouse on Madison, a passionate fanbase, overall high-quality design, and a good Winter Classic jersey addition (although their recent one was a disappointment). They had a tough go of it through the ’90s and early ’00s, with bad ownership and lack of a on-ice quality product (and not much fan support), but they’ve turned that all around on the backs of Toews and Kane, and from a branding perspective, they’re a beast. They’ve been consistent, and consistently excellent.