We’ve made it to the home stretch! It’s been a long 3 months since Chicago hoisted the Stanley Cup, and it’s almost time for hockey to return. The final flood of new masks are being revealed before the puck drops on the new season, and as always, they have to be reviewed before they hit the ice.

Goalie masks, from a design standpoint, are complex entities for being such a small piece of a player’s equipment, so to make things easier (and because who doesn’t love getting graded!?) each mask will get an overall letter grade in addition to the design breakdown. 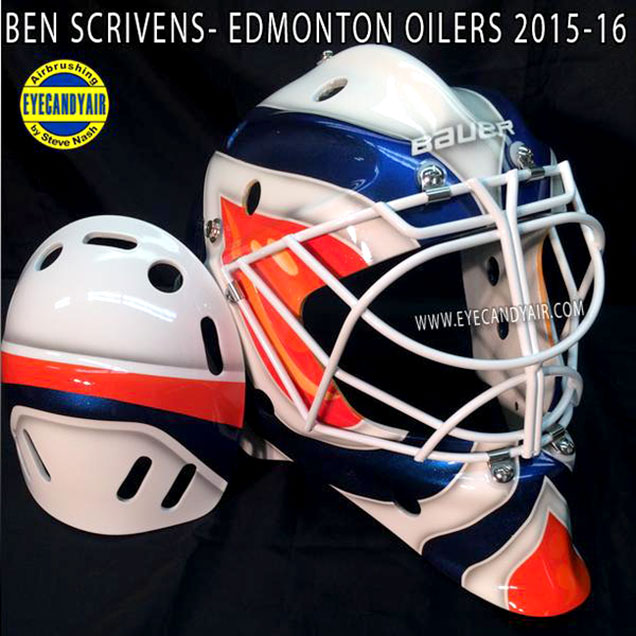 Oilers netminder Ben Scrivens has a long history of showcasing fantastic art on his masks. He’s sported a variety of bold, minimalist buckets, as well as a collection of charity masks designed by artists living with mental illness. For this season, Scrivens once again worked with artist Steve Nash of Eyecandyair to create a slick new oil drop design. Coordinating beautifully with his new pads, the primarily white composition’s only color comes in the orange oil drops, blue surrounding borders, and orange and blue stripes across the backplate. While Nash has certainly created more dynamic designs for Scrivens in the past like the color-blocked classic oil drop and Alexisonfire tribute mask, this paint job is clean and simple and a nice component of Scrivens’ complete setup. 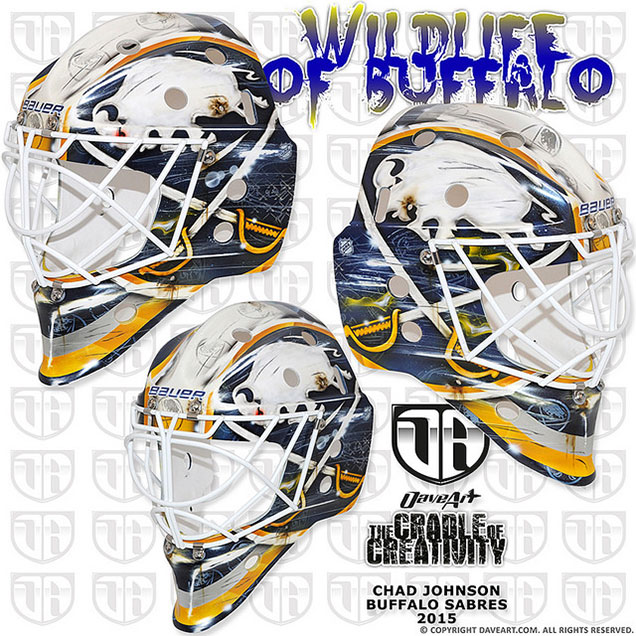 In a relatively simple design for prolific artist Dave Gunnarsson, Chad Johnson gets a fully distressed look for the new season in Buffalo. The design in entirely focused around the Sabres logo with large depictions on both sides and smaller outlined logos creating a pattern throughout the entire mask. The real standout of this design however are the weathered effects Gunnarsson has so artfully created. “The vintage effects with the old school marks and also real puck marks and rust gives the design a nice vintage touch,” Gunnarsson describes on Instagram. The choice to keep the design simple and allow the distressing to shine was a great one, as the effects are beautifully executed and wonderfully nostalgic. 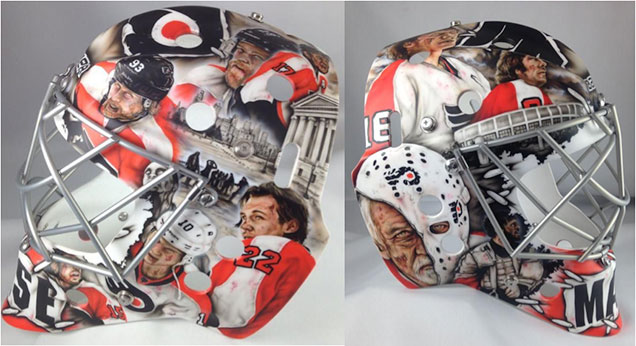 Perhaps Mason is a fan of The Walking Dead (or just really likes zombies) since the Flyers goaltender stuck with the theme once again. After zombi-fying teammates Claude Giroux, Scott Hartnell, Wayne Simmonds and Jakub Voracek, along with equipment manager Derek Settlemyer last season, more of Mase’s Philadelphia teammates and Flyers of the past are, um, honored…on this year’s bucket. Artist Fran Drummond from Paintzoo depicted Voracek and Simmonds – making their second straight appearances – and the Schenn brothers, as well as famed broad street bullies Bobby Clarke and Bernie Parent all in back-from-the-dead form.

This mask has a lot going on and is painted in a photo-realistic style, quite different from the more cartoonish or stylized looks more commonly seen around the league. The orange and gray color scheme and composition do help bring some balance to an otherwise overwhelming design, but Drummond executed this concept beautifully – a mask that certainly deserves a second, third and fourth look. 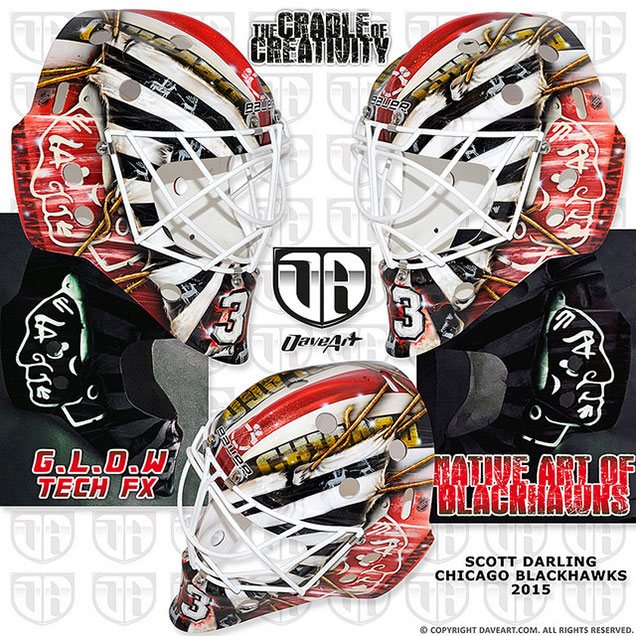 Hometown kid and breakout star in the Hawks’ latest championship run Scott Darling got a snazzy and unique new bucket from artist to, well, everyone, Dave Gunnarsson for the new season in Chicago. “We wanted to do a design in a totally new way, a new kind of Chicago Blackhawks mask,” Gunnarsson shared on Instagram. “The design is a tribute to the spirit of the native art of America.” Taking the inspiration from Native American art and adding a Daveart touch with glow in the dark paint, this mask is really great for being so different from what we’ve become accustomed to seeing around the league time and time again. The bold black and white striping in the center balances out the detail in the ropes and small tribal patterns throughout the design. While the only trace of the Blackhawks logo is in the burnout on each side (which also glows in the dark) and small “C” logo on the top center, this design is unique yet truly feels like the Blackhawks brand, which is everything you want in a mask. 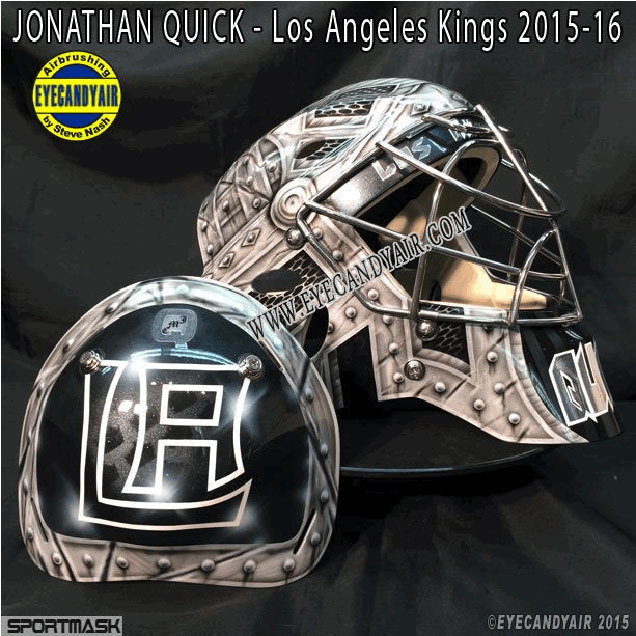 Relatively little has changed on the 2-time Cup champion and Vezina winner’s mask over the last few seasons, but given Quick’s recent success with the Kings, Jonny doesn’t have much reason to change anything.

Deferring to my review of Quick’s 2014-15 mask, the same pretty much holds true for the next iteration in the battle armour series. Once again, Quick’s mask remains mostly unchanged over the past few seasons. Last year, artist Steve Nash made the addition of the chainmail texture which is also included in this design. The notable changes come mostly on the backplate, where the Stadium Series alternate “LA” logo has replaced the side-by-side lettering and some additional detailing has been added to the grommet trim.

This design has been a solid one for the past few seasons, and while it would be nice to eventually see Quick shake things up, if it ain’t broke… 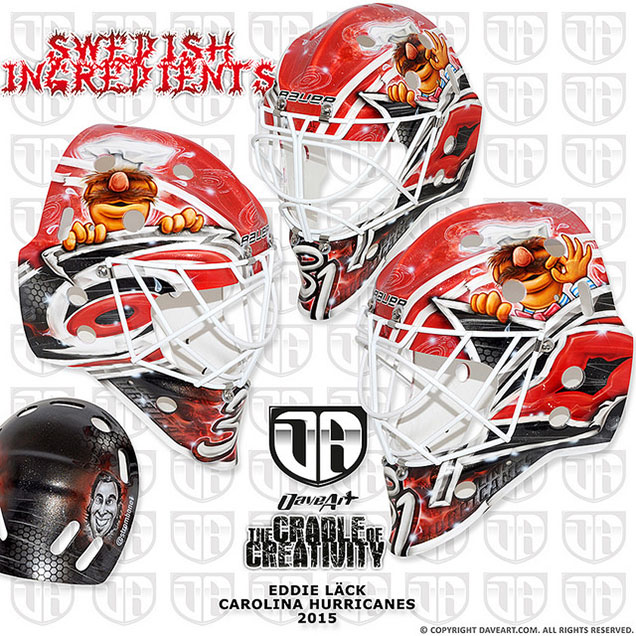 Perhaps winning the award for best comic relief from a goalie mask, former Canuck Eddie Lack is starting his tenure in Carolina by giving a nod to a former teammate and a Jim Henson creation. Humorously titled “Swedish Ingredients,” Lack’s new bucket features the muppet (who’s already made friends with another Swedish netminder) and a caricature of Roberto Luongo on the backplate. “Eddie likes food, and especially tacos,” artist Dave Gunnarsson explains on Instagram, although we already kind of figured he was a taco lover…“The Swedish Chef shows up on the mask itself! Ready to fix some tacos for Eddie.” While the composition of this mask may not be Gunnarsson’s most creative work, the humor and playfulness more than compensate for any lack of pizazz in the design. Perhaps Luongo himself even sparked the bromantic design concept, tweeting his own mockup to Lack last spring while Eddie was still with Vancouver.

For now, Lack and Gunnarsson gave us all something to smile about with this design. Smaklig måltid! (Bon appetit)

As more goalie masks for the new season are announced, we’ll be showcasing them. Make sure to come back and check it out, as we’re already working on Part 5!