With 30 teams in the NHL, each with at least two goaltenders on their roster and some wearing multiple masks in one season, the league has seen thousands upon thousands of masks throughout its long history. Ok, so goalies didn’t actually wear masks until the late 50’s when Jacques Plante became the first NHL netminder to wear one after being struck in the face with a puck and later returning to the game in the mask he had previously only worn for practice. Regardless, the number of unique mask designs that have graced NHL rinks is too high to count. 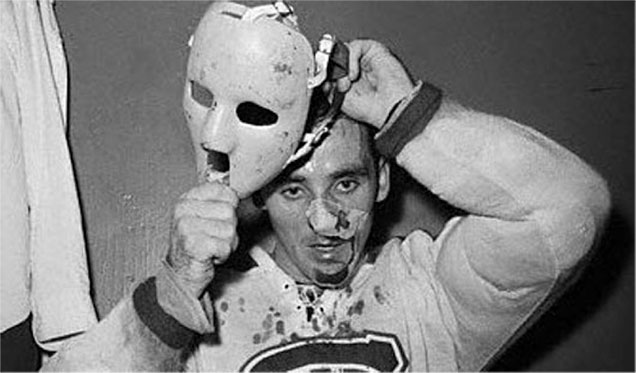 Even the goaltenders who then adopted the new form of protective gear didn’t think much about the appearance of them until the 1970’s when Gerry Cheevers began putting markings on his mask every time he was hit in the face, either with a puck or a skater’s stick. That all changed in 1974 when art student and former goalie Greg Harrison crafted a light blue mask for Penguins goalie Jim Rutherford, commonly viewed as the first instance of personal art on a mask and thus spawning a new artform. Harrison would go on to make masks for more than eighty percent of the league’s goaltenders in the 70’s, including the famed masks of Gilles Gratton, Brian Hayward and Wayne Stephenson, just to name a few.

40-odd years later, goalie mask design has reached a new level of artistry and personal expression for netminders. Among the thousands of masks to hit the NHL ice over the past few decades, there are a handful whose design and innovation make them stand out as pioneers and icons of one of the most unique forms of artistry in sports. 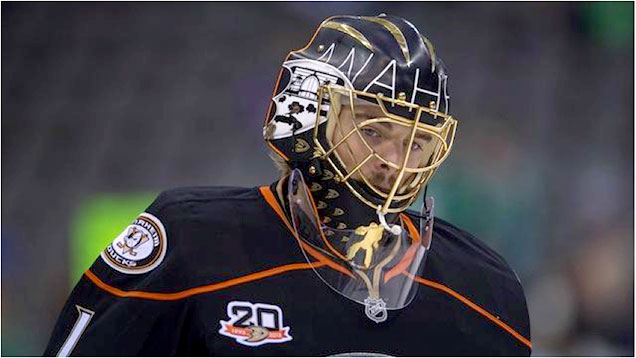 While Jonas Hiller’s black and gold Ducks mask hasn’t exactly hit icon status in the 2 years since its debut, the design is worth mentioning for its innovative and contemporary style. I wrote about this mask last summer, as it’s one of my favorites in the modern era of mask design, opting for a more design-y (for lack of a better term) aesthetic, rather than the busier, airbrushed style (or the “drug-induced, side-of-the-van paint job” look, as Harrison so eloquently called it) of his colleagues.

The gold foil complementing the matte black paint and gold cage is something we don’t see very often (although Lundqvist is seemingly a fan of the glitter foil himself) and the lightweight sans-serif font across the top of the mask is especially unique. To quote Buzzfeed (file that under things I thought I’d never write), “this is the best of the bunch in the ‘stylized team logos’ category, but it looks like a grad student in a graphic design class made it.” As someone who has a degree in graphic design, I’ll assume that was meant as a compliment. 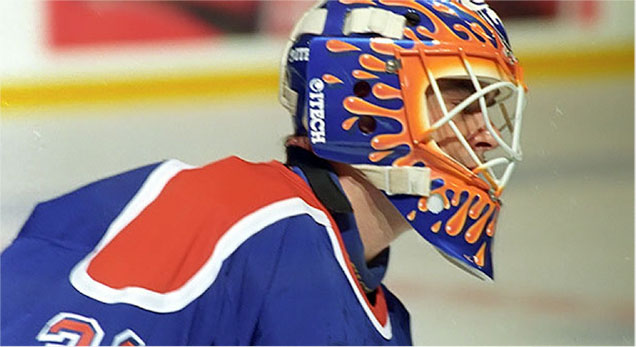 We don’t often mention the 90’s in matters of good or influential design, particularly when it comes to sports (*shudder*) but CuJo’s oil sploosh mask is still relevant almost two decades later. Jaroslav Halak commissioned an almost-replica of Joseph’s mask last season in Long Island with some tweaks made to update the design for the new millennium, and Ilya Bryzgalov used a similar orange splash design in his 2013-14 Oilers mask as well.

The clean lines and relevant imagery on this mask still bring the same immediate recognition to the Oilers franchise as they did during Joseph’s time with the team. 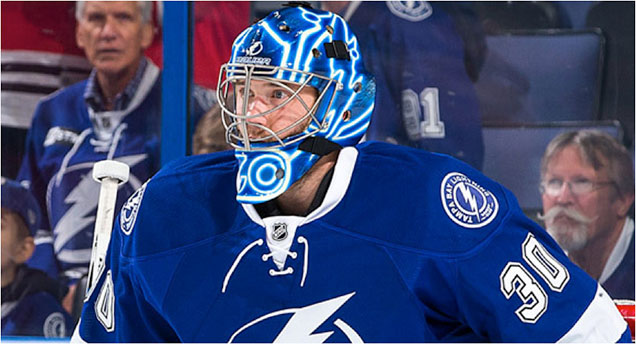 It’s always a bit of a stretch to call something “iconic” when it’s only been around for less than a year, but Ben Bishop’s glowing Tron mask is one of the most innovative and eye catching masks in recent time and will probably be much higher up one of these lists 10 or 20 years from now. The winner of our 2015 Bucket Bracket Showdown, Bishop’s mask is special for a number of reasons. From the finals matchup:

For the complete analysis of this mask, you can read the full article of the Bucket Bracket Showdown finals (link above), but what really makes this a standout is the use of a new medium in a sensible way. It’s a well-known principle among designers that content and subject matter should always precede design, and Bishop’s artist, Dave Gunnarsson, has used his G.L.O.W. Tech FX paint here in a way that makes sense – to depict lightning. Gunnarsson has been a pioneer in, perhaps still the only artist, using glow in the dark paint on goalie masks, and for that, this mask is a trailblazer for masks of the future. 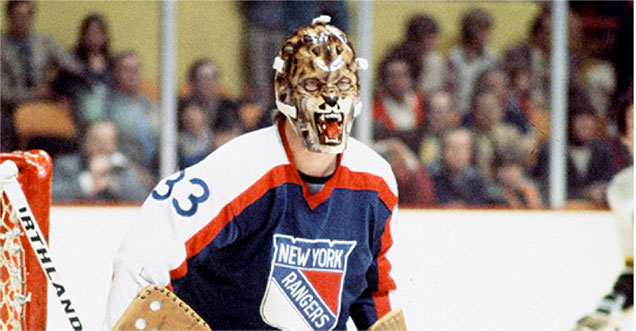 Despite the slightly terrifying Jason Voorhees associations, the popular face plate-style masks of the 70’s helped opened a new door when it came to mask design. While most goalies were at the time just beginning to explore the idea of decorating their masks, Gratton had perhaps one of the most elaborate designs of the era.

Passionate about astrology, it seemed fitting that Gratton would channel his zodiac sign – the Leo – by wearing a mask that all but transformed him into a lion. It’s been said that Gratton hoped the mask would scare or distract opponents, but his numbers with the Rangers suggest that maybe his plan wasn’t the most effective…

Many goaltenders in today’s day and age have used intimidating animal motifs on their buckets, including Tuukka Rask and Ryan Miller carrying on Gratton’s legacy of ferocious designs. His one season in New York may not have been the most notable from a goaltending standpoint, but his lion mask has since gone down in history.

In the Sharks’ inaugural season, Hayward’s mask stole the stage for its bold and in-your-face paint job. Following in the footsteps of Gratton’s mask with a serious intimidation factor, the blood-dripping teeth surrounding the face opening of Hayward’s bucket created the illusion of a shark swallowing the goaltender inside the mask.

Like Gratton’s, Hayward’s Jaws-inspired design sparked a new take on the animal theme, as he was one of the first to use the mask’s face opening as the mouth of said animal. More recently, we’ve seen goalies including Al Montoya and Justin Peters use the same concept on their masks.

With the Sharks now celebrating their 25th anniversary, Hayward’s mask will forever be an icon for the franchise and all animal masks of the future. 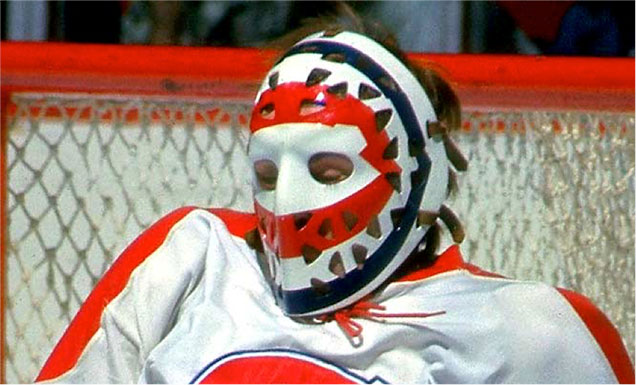 Another from the 1976 season, Ken Dryden’s face mask is perhaps one of the most recognizable in Canadiens history. Still in the early days of mask design, Dryden breaks the top three for being one of the earliest to incorporate team branding into his mask design.

In the modern era of mask art, we see goalies like Ben Scrivens and Michael Hutchinson sporting minimalist designs that are entirely focused around their team’s visual identity, but Dryden’s red and navy stripes pioneered this way of thinking about mask design. The stripes on his mask closely mimic those on the iconic Montreal jerseys, tying what was, at the time, an odd and new piece of protective equipment to the team’s uniform and visual identity. 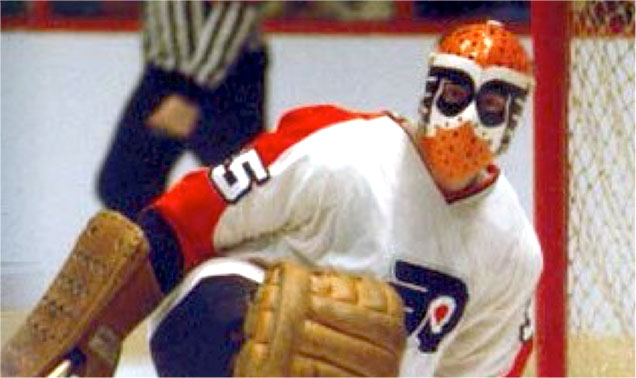 Well, 1976 sure was a good year for progressive mask design, eh? Another goaltender who used his team branding in an innovative way was Wayne Stephenson in Philadelphia. Having served as a backup to Bernie Parent, Stephenson’s mask didn’t get the same level of recognition as that of Ken Dryden, but the creative use of the Flyers’ logo is certainly worth noting.

Rather than keeping the white base of the mask as many goaltenders did in the 70’s, Stephenson’s mask went all orange, turning the Flyers’ logos into a superhero-like eye mask. While most masks in the modern era incorporate the team’s logo somehow in the design, the placement and transformation of the logos on Stephenson’s mask was ground-breakingly creative for the time period.

Well-known mask artists like Steve Nash of EyeCandyAir are still inspired by Harrison’s clean and minimalist style. “I loved everything Harrison did,” Nash said in an interview with NHL.com. “When I watched guys wearing his masks, they had this aura about them. It captivated me.”

When it comes to iconic masks, it’s hard to think of anyone to fill the top spot but Gerry Cheevers. Widely credited with sparking the beginning of mask design with only a permanent marker, Cheevers’ black markings worked both as decoration and for intimidation.

Having inspired a tribute mask from former Bruin Steve Shields, Cheevers’ legacy, not only for his play but for his mask, is held in high regard across the league. “When he started putting the stitches on, people took note,” said former goaltender-turned-GM, Ron Hextall. “It wasn’t just to protect your face, it was a piece of art.”

Agree? Disagree? What iconic mask is your favorite? Tell us in the comments or on Twitter!

Leave a Reply to Sedate Me Cancel reply