When I was a kid I remember making pilgrim hats and feather headbands out of colored paper and running around my elementary school classroom like a maniac. Appropriate? Probably not. For most North Americans, that’s about the extent of integrating the original native culture into our Thanksgiving celebrations. Unfortunately, It seems that the largest recognition of native culture in modern media is by our sports teams. Now, while teams in some other sports have done this in a distasteful way, I am making an effort to highlight professional hockey teams who have celebrated Native culture by infusing their traditions, art or memory into the branding in an excellent way and may have a chance at continuing to exist when other sports teams branding will collapse under under their cultural insensitivities.

With that being said, I proudly present the Top 5 Native-Inspired Hockey Logos: 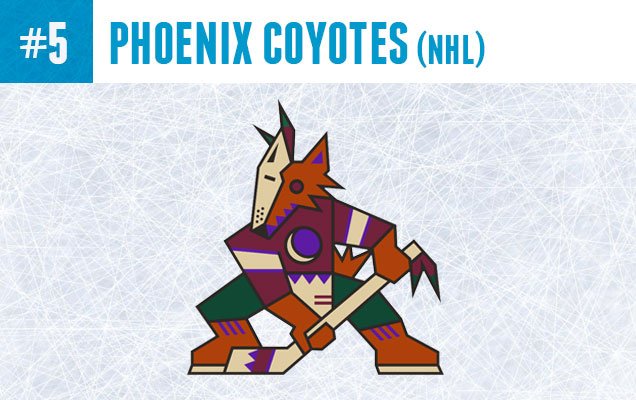 Inspired by the Kachina spirit dolls in western Native religious beliefs, designer David Haney received the approval of Hopi tribe leaders in Arizona before unveiling the Coyotes original logo in 1996, which instantly became one of the most unique and complicated logos to ever grace the NHL. The colorful logo and quirky (okay, ugly) uniforms were retired in 2003 with their current, simpler Coyote head logo and color palette, but their infamous Kachina-style logo may be the most ‘southwest’ design that professional sports have ever seen, and I would love to see the logo become a more regular alternate for the team. 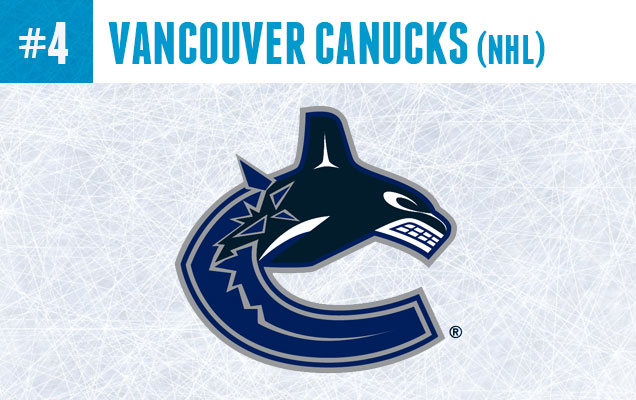 Though the Canucks have had a variety of very different primary logos throughout their history, the team’s current Orca ‘C’ design is fast approaching the longest tenure for a primary logo in Vancouver. The Orca is stylized after wood carvings of the native people of Haida Gwaii on the north coast of British Columbia. It is a fitting tribute to the art created by the long-time locals. In 2013, a Haida legacy art piece, a 6 ft tall cedar ‘pod’ carved by Haida artist Cori Savard, was installed at Rogers Arena, celebrating the ongoing relationship between the Canucks and the Haida Gwaii.

Much like the Montreal Canadiens, whom the Chiefs model their jerseys after, Spokane has a simple and memorable logo. The team smartly traded their original Native chief caricature for a simple letter ‘S’ wearing a feathered headdress, which was a fantastic improvement. Spokane has had a version of the ‘S’ since 1985, which incorporated a hockey stick into the bottom curve of the letter ‘S’. The hockey stick white ‘tape’ was removed in 1990, leaving just the separated bottom shape, which really makes no sense, but neither does an ‘S’ wearing a headdress, I guess. 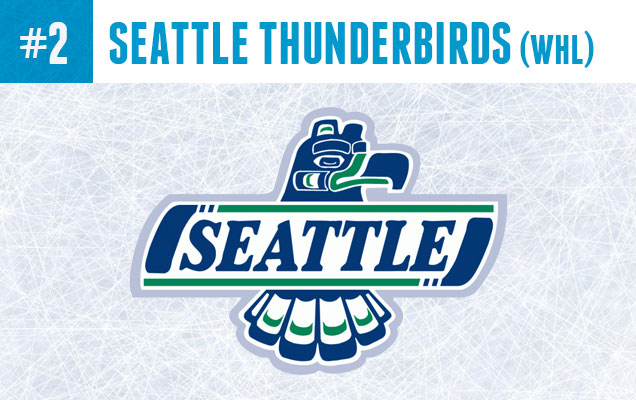 The Thunderbirds’ ties to native tribes may not be as obvious as other logos on the list, but their strong brand identity and logo design cannot be denied. The Thunderbird’s branding borrows heavily from the NFL’s Seahawks, but I actually think the Thunderbirds’ version stays truer to the vibe of the carved mask of the Kwakwaka’wakw tribe of Vancouver Island, who inspired the original Seahawks logo. The hockey sticks serving as both the bird’s wings and as a frame for the ‘Seattle’ wordmark is brilliant, and makes the Thunderbirds one of the best logos in the WHL. 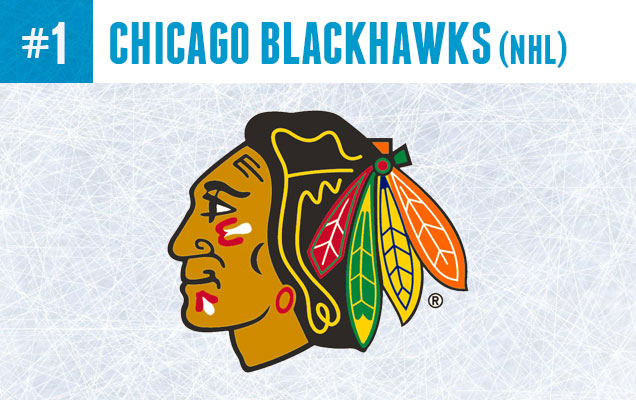 Chicago’s “Chief  Black Hawk” logo, honoring the legendary Illinois Sauk tribe leader, is largely considered the best Native themed logo in major American sports. So far, avoiding the public controversy of the NFL’s Redskins and the cringe-inducing Chief Wahoo of the MLB’s Cleveland Indians, Chicago’s long standing logo has only had minor changes since its inception in 1926. The smiling, brightly colored profile is a fan-favorite and a huge merchandise seller (the team’s three recent Stanley Cup championships help too). The Blackhawks organization’s long term partnership and contributions to the American Indian Center of Illinois and commitment to spreading education about Native culture is worth noting, and deserves a place setting at the dinner table of political correct arguments about sports logos this holiday season.

Agree? Disagree? Let us know in the comments below or join the conversation on Twitter!