I know, I know. Late to the game on this one. What was leaked through the NHL Store months ago, then officially unveiled a few weeks later by the Avs and Ducks, will finally get the full HbD Breakdown that it needs…and deserves. Read more after the jump. 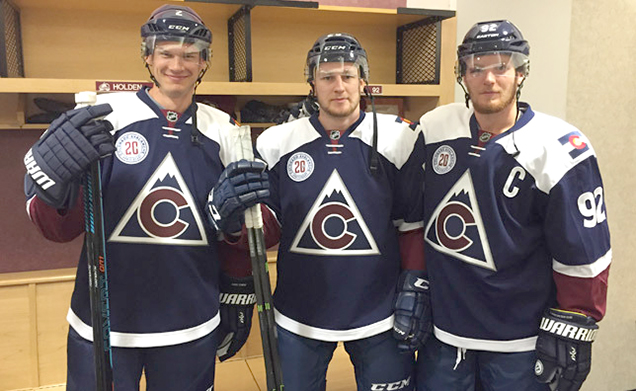 First up, the Avs. The most obvious change from their brand with this jersey is the introduction of a new alternate logo that looks a lot like an old logo. While the execution is somewhere different from the old Rockies logo, the concept is identical: a simple mountain icon with the Colorado flag’s ‘C’ with a circle in the middle.

The new version simplifies the concept by removing the stripe behind the ‘C’ (which was, again, from the Colorado state flag) and making a outline of the mountain a solid triangle, removing the jagged lines the mountain’s peak. The end result? Something striking, simple, modern, relevant to the location, and with roots in history. Generally, that’s the makings of an absolute classic logo, and this one almost gets there.

The issue I have with the logo is the colours. If you’re mimicking the state flag, the circle in the middle of the ‘C’ is yellow and pretty obviously represent the sun. I haven’t seen a black hole sun since the early ’90s, and this navy blue one comes close to that – which doesn’t make a lot of logical sense.

Some may find this sun quibble a trivial pursuit, but it’s a real risk they took. (Couldn’t help those boardgame references, sorry!). If you’re using a flag as your logo, just dumping that flag’s symbology without any logical reason other than that it doesn’t fit your colour scheme isn’t a good design strategy.

The other options? If you made it black, it could symbolize a puck, which makes more sense despite the fact that you’re abandoning the original intent of the flag your mimicking. But it’s not black, it’s navy. Or, you go with the original flag and make it yellow…which makes it stand out like a sore thumb on the jersey.

Or, at least, make it lighter than then the rest of the logo, maybe using the traditional Avalanche blue. It still fits team branding, but while it’s not a sunny yellow, at least it makes an attempt in that direction? Like a cool winter-esque sun? Or a moon perhaps?

Design pros and cons are always in the details, and while everything else about the logo is really solid, this one detail kind of breaks it.

Okay, but what about the jersey itself? Getting to it! The design is super-simple and minimalist…and consistent. And single white stripes is used both on the sleeves and on the bottom of the jersey. Then, it’s mimicked again on the shoulder yokes. I’m generally not a huge fan of the white shoulder yokes (and I feel the same way about the Islanders using it) as it draws a lot of attention to it.

In the Avs’ case, because there’s a lot of solid white both in the logo and in the stripes, it’s better than most. And, you could use the symbolism of snow-capped mountains to explain it. But, it just still dominates a little bit too much, as they’re designed quite large…too large. They’d be better scaled back a little bit.

But mostly, the rest of it is pretty great. The burgundy cuffs separated the the white stripes works exceptionally well, especially since it’s carried onto the uniforms’ socks. 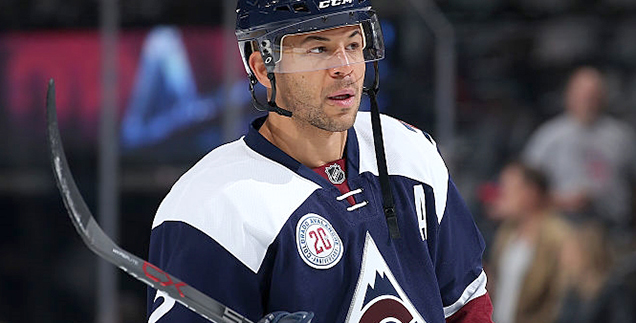 And the minor detail of the reversed collar lacing (so that there’s small white stripes at the collar (see above)) without the lace ends hanging out feels like a good mixture of historic and modern. Those small details can go a long way.

The Colorado state flag shoulder patches. Cool. No problems there.

No crazy about the navy blue base of the uniform. I would’ve loved to have seen them use their regular Avalanche branded blue (from their previous third jerseys) – lighter and more snow- and ice-esque. I know, again, they’re drawing from the state flag design, but when you have a unique blue that you use on your uniforms, why not just keep rocking that? It looks way better anyway.

Minor issues aside, the design is a great mix of modern and vintage: it’s drawing from the teams’ history, the specific location of the team, and brings in some modern (and minimalist) touches that creates something unique. I’m a fan. Not a massive fan, as there’s still some issues, but a fan nontheless.

Now the Ducks. They, like the Avs, have delved into their hockey history to resurrect a logo and then changed elements of it to fit with a modern aesthetic. In this case, however, it hasn’t worked as well as it did for the Avs.

The much-loved Disney duck mask (undeservedly-loved IMO, as it’s little more than corporate-schlepping mixed with a cartoon that doesn’t belong in a professional league) makes a comeback, but instead of eggplant and teal, it’s orange and beige. And that’s a major problem.

I have no idea what makes the Ducks’ organization think that orange and beige is an acceptable colour combination to use, but it just doesn’t look good. Like, ever. The vibrancy of the orange overpowers the beige to the point when it looks like dull vomit. It just accentuates what beige usually is perceived to be…boring.

And unlike the Avs, who used their historical branding and re-imagined it for a modern hockey jersey, Anaheim just slapped different colours on it and called it a day. It’s lazy and uninspired, taking a much-loved jersey and trying to make money on it by making a lesser version of it.

I also have no idea what makes the Ducks’ organization love erratic striping so much. Their current home and away jerseys have a multitude of diagonal non-sensical and inconsistent patterns. And these jerseys follow that non-sensical pattern, albeit with straight stripes instead. 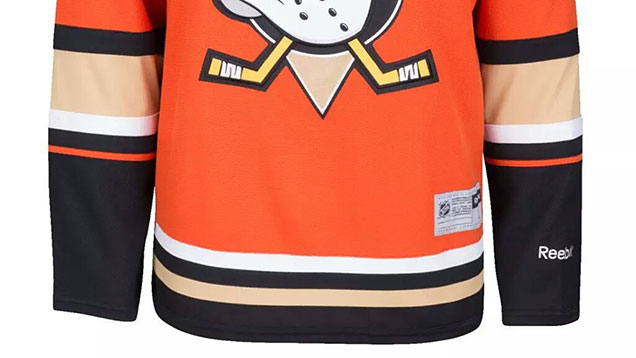 The pattern at the bottom of the jerseys (white, black, beige, black) actually has consistent and well-executed lines, and it mimics the nice pattern that the original Mighty Ducks jersey had that this jersey pays homage to. But then the sleeves are just a clusterfuck of different thicknesses of lines and colours, seemingly without much thought put into it. It’s painful to see such an ordered pattern mixed with such a non-sensical one on the same jersey. If you’re going to be inconsistent, at least be consistent about it. 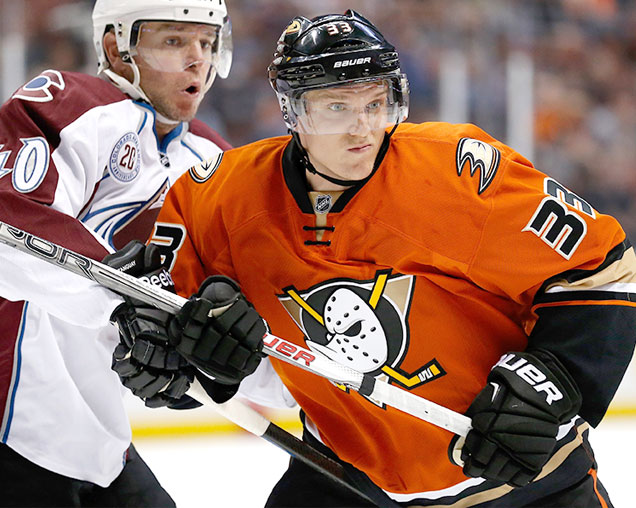 This is Anaheim’s second attempt at an orange jersey, and while it’s not fantastic, it definitely better than those Stadium Series jerseys from a couple seasons ago. Those were overly simplistic, with nearly nothing else to dull the overbearing nature of any orange jersey. Here, with more stripes and other elements, it’s a little more balanced.

But orange jerseys are still difficult to pull off. The only team that has consistently done it well is Philadelphia, because they keep things very simple and strong in their jersey designs. Anaheim, using black, white and beige, would never be able to achieve that level of simplicity, but they didn’t even try with all those stripes. Again, if they had simplified those stripes, they might have been able to create a orange jersey that works. Didn’t quite get there though.

The Stadium Series has spawned a new place for design opportunities on hockey jerseys: the collar. For better or worse. The Kings added two crowns representing their two Cup wins. The Avalanche added “5280”, reference the amount of feet in a mile. The Ducks? They added “Anaheim”. So yeah, why even bother if you’re not going to do anything interesting with it. That one’s a definite fail.

The primary Ducks logo as shoulder patches? Like the rest of the jersey, kind of lazy and uninspired, but not a big issue.

Have I mentioned beige and orange yet? Check. Did I mention that they decided to include an additional beige/yellow as well? The hockey sticks on the logo bring in another shade of beige. Because apparently you can never have too much beige attached to orange.

While it’s a better stab at an orange jersey for the Ducks, there’s way too many missteps to consider this to be a great jersey design. And it’s hard to see it as anything other than an attempt to sell more jerseys by badly and lazily resurrecting a much-loved old logo and slapping different colours on it.