Wayne Gretzky is a god man who needs no introduction. He transcended hockey fandom and wields the star-power of the likes of Michael Jordan and Muhammed Ali. This month he celebrates his 55th birthday and still holds over 60 NHL records. He is the all-time leader for goals, assists, and points by a ridiculously large margin and is the only NHL player to have his number retired league-wide after retirement. Four NHL teams were lucky enough to have Gretzky’s #99 grace their uniforms. Some of these jersey designs certainly didn’t deserve the “Great One’s” name on their back, while others became icons of the sport.  In this edition of Top 5 we countdown “The Great Ones” worn by the legendary Wayne Gretzky. 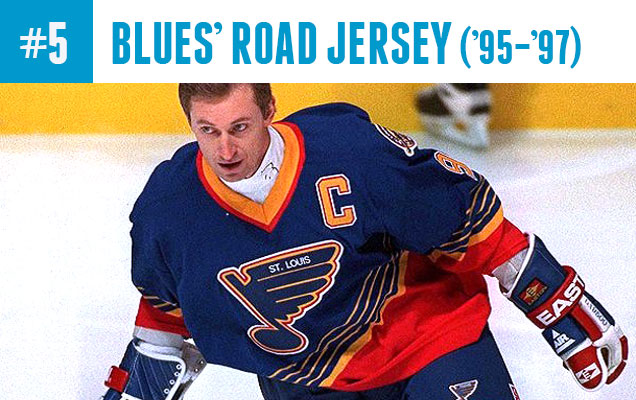 It was shocking the first time I saw Gretzky in this uniform. He only spent one season with the Blues (1996) but this happened to be the only period in the Blues history that that they seriously experimented with using red as a major element in their color scheme. Seriously, the only time. Here’s  a tip for teams who may find themselves in a similar situation: If a legend joins your ranks, make sure you’re wearing your best jersey design. This is not the time or place for experimentation. Your future jersey sales may depend on it. (Ed. Note: Good god, those numbers on the back are an abomination.) 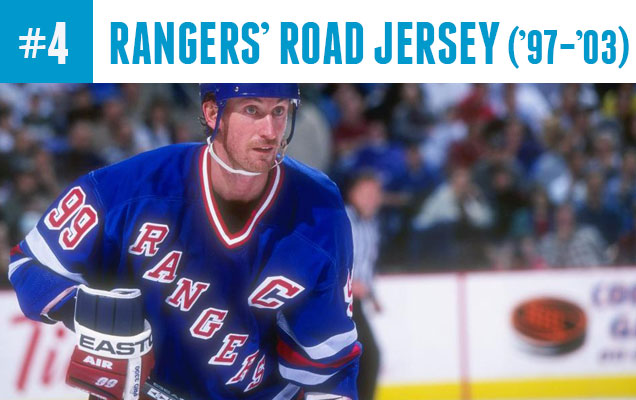 Gretzky spent his last three season in the NHL with the New York Rangers (1996-99) and helped the team get to the Eastern Conference finals in 1997. He wore this jersey in his final game at Madison Square Garden, and is a fitting iconic design for this “original 6” team, who still wear a very similar version of this jersey today. (The Rangers infamous ‘Lady Liberty’ jersey is also stunning to see Gretzky in, and was worn on Sunday home games and home games against Original 6 teams in 1996-98).

During Gretzky’s time in Los Angeles, attendance and ticket sales soared for the Kings and the popularity of the NHL sky-rocketed on the west coast, adding two more NHL teams in California, the Mighty Ducks of Anaheim and the San Jose Sharks. Gretzky’s first season in Los Angeles was the team’s first introduction of the Black and White color scheme, an extreme departure from their previous purple and gold uniforms, along with the retirement of their intricate crown logo in favor of the text-based “Kings” logo worn through most of the 90s. Unlike the Blues, the Kings color scheme gamble paid off, and they wear an evolution of this concept today. 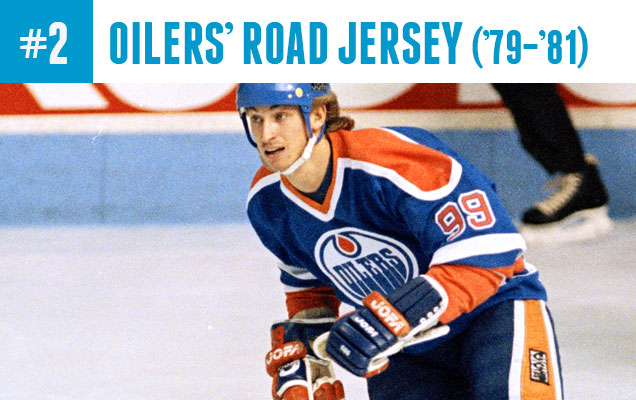 Gretzky has worn a lot of blue during his time in the NHL, but none greater that the Oilers road uniform, which the team brought with them from the WHA (World Hockey Association) for the Oiler’s first year in the NHL in 1979. The young #99 in blue and orange, made a name for himself, and for the Oilers, as they carved out their place in the NHL (Gretzky won the NHL’s most valuable player award in their first season as well as the Hart Memorial trophy). The Oilers logo and bold colors quickly became celebrated NHL icons themselves, and the team’s overall branding has remained consistent. 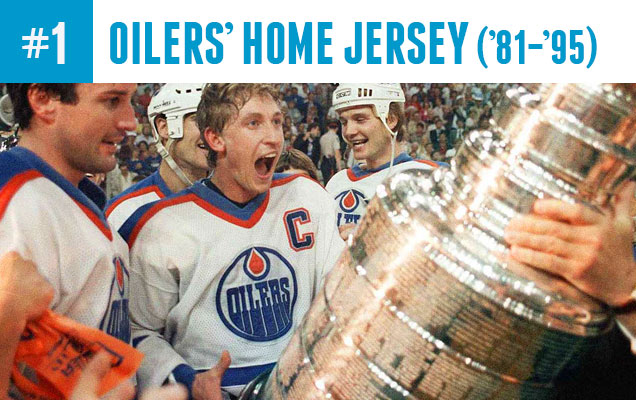 It can be argued that a team’s home “white” jerseys are generally less memorable than their colorful road counterparts, but in Gretzky’s case, the Oilers home uniforms are easily the most iconic. Gretzky hoisted the Stanley Cup all four times, wearing this jersey. The blue and orange stripes, along with the oilers logo are a bold contrast against the stark white jersey. It’s a no-frills, all-business, design that compliments Gretzky’s work-ethic perfectly. It was the obvious choice for the greatest jersey worn by “The Great One” and you can count on the Oilers keeping this winning look for a long time to come.

One Response to “Top 5: The “Greatest” Jerseys”