Ice Hockey and heavy metal music go to together like peanut butter and jelly, like Batman and Robin, like Frankenstein and umm…Bride of Frankenstein. You get the idea. The two have a long  history together that may seem more obvious to European hockey fans than their North American counterparts.

Take the country of Sweden, for example, home of some of my own favorite bands such as hardcore-punks Refused and melodic metal-heads In Flames. Sweden also consistently exports premier NHL players such as Henrik Lundqvist, Niklas Backstrom and the Sedin twins. The same story goes for Norway, Finland and various other northern hemisphere countries. Perhaps it’s the bleak, cold, winters that breed equally aggressive music and deadly-talented hockey players? All we know is that these two were made for each other and there have been some great crossovers between the NHL and the metal music world. In this edition of  Top 5 we rank our favorite head-banging hockey designs. 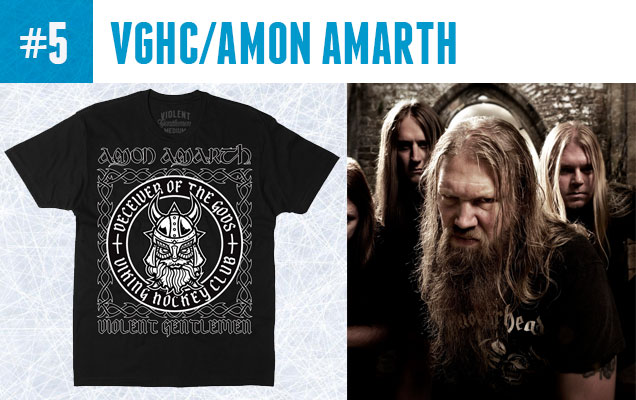 If you’re a hardcore hockey fan you’re probably aware of Violent Gentlemen Hockey Club, a hockey-themed clothing line based out of southern California. The company teamed up last year with Swedish Viking metal gods Amon Amarth that resulted in great crossover t-shirt design. The band is definitely deserving of the hockey spotlight, whose dark presence has been felt up-close at NHL ice-rinks, sporting their own jersey designs. Amon Amarth isn’t the only heavy music band showcased by Violent Gents, who also have crossover t-shirts for Every Time I Die and Matt Skiba of Alkaline Trio.

Suggested Listening: “Twilight of the Thunder God” by Amon Amarth 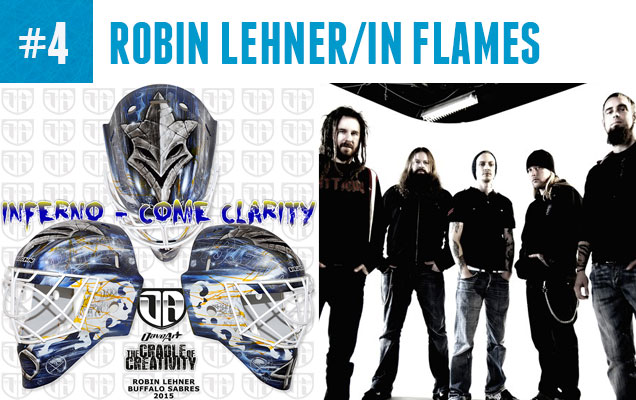 Buffalo Sabres goaltender, Robin Lehner, has had several mask designs inspired by his favorite metal band and fellow Swedes, In Flames, who he often listens to in the locker room. Designed by famed mask artist Dave Gunnarsson, it features a jester head that has been a reoccurring symbol throughout the band’s career. The stone-grey head is front and center, with yellow splatter and Sabres logos wrapping around the sides.  It’s less flashy, but in my opinion, a better tribute to the band than his 2014 In Flames mask which he sported for the Ottawa Senators.

Suggested Listening: “Take this Life” by In Flames 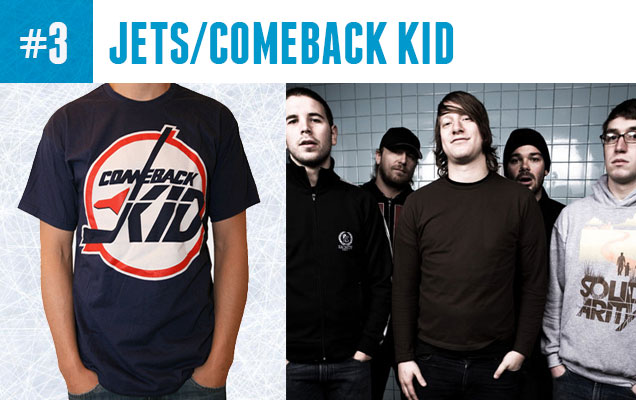 I actually used to own this t-shirt myself until my former roommate wore it and never gave it back! I don’t blame him, it’s a great band and one of the best re-appropriations of an NHL logo that I’ve seen.  Canadian hardcore/punk band Comeback Kid, are actually named after a headline in a newspaper about hockey player Mario Lemieux coming back to the NHL. Hailing from Winnipeg, the band’s name fused with the old Jets logo is perfect, and the designer did a great job incorporating the band’s name into the existing logo design. It’s no surprise that this is a great selling t-shirt design for the band and they’ve been re-printing this design for about 5 years longer than the current version of the Winnipeg Jets have existed! Now if I could just figure out how to get my t-shirt back… 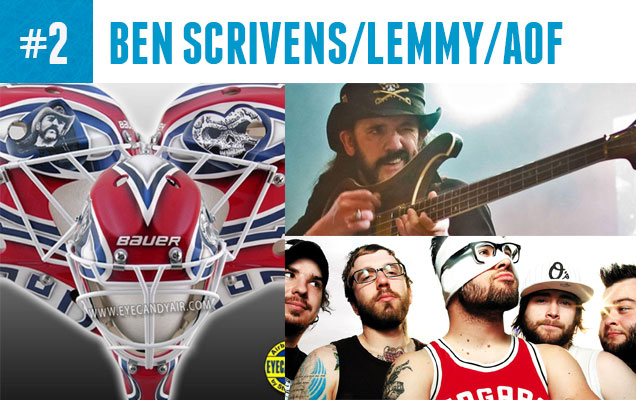 Montreal’s goaltender Ben Scrivens is a fan of his home country of Canada’s heavy-rock outfit AlexisonFire, whose logo he has used on various masks, notably his 2014 Oilers mask and this season’s Canadiens mask. What makes his newest mask special is the inclusion of a tribute to heavy metal legend, Lemmy Kilmister of the English rock band Motorhead, who passed away last December. Designed by Steve Nash of EyeCandyAir, Lemmy’s portrait framed by the ‘Ace of Spades’ balances perfectly with heart-framed AlexisonFire skull logo on the other side of the mask. Both black and white logos pop nicely against the red, blue and white Canadiens team colors that stretch across the rest of Scrivens mask. Overall, this is a well-executed design and a touching tribute from a heavy music fan.

Suggested Listening: “Aces of Spades” by Motorhead / “This Could Be Anywhere in The World” by AlexisonFire 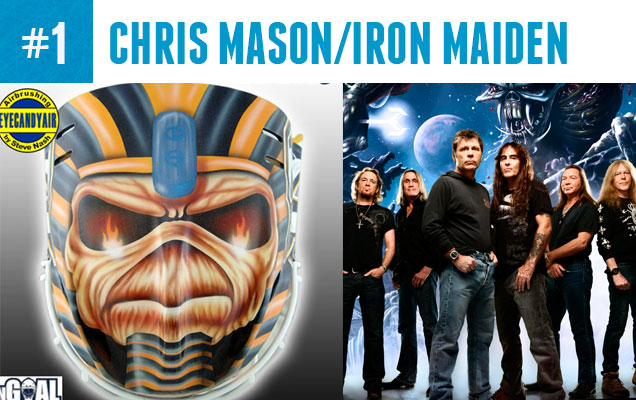 Former NHL goaltender, Chris Mason, has had several Iron Maiden inspired masks throughout his career but none better than his 2012 Nashville Predators mask. What makes this design so good is the flawless blending of Iron Maiden’s “Eddie” character, from their Egyptian themed ‘Powerslave’ album, with the Predator’s blue and gold branding. The design was a special project for mask artist Steve Nash of EyeCandyAir whose own art was inspired by Derek Riggs who created Iron Maiden’s original album covers. Obviously, these two themes were fated to cross paths! So, what have we learned? I think it’s that when two elements of a design look like they belong together, a great crossover has been created, and for that reason, Mason’s mask has earned the top spot on our list.

Suggested Listening: “The Number of the Beast” by Iron Maiden