NHL Playoffs 2016 (Round 2) Countdown and Predictions 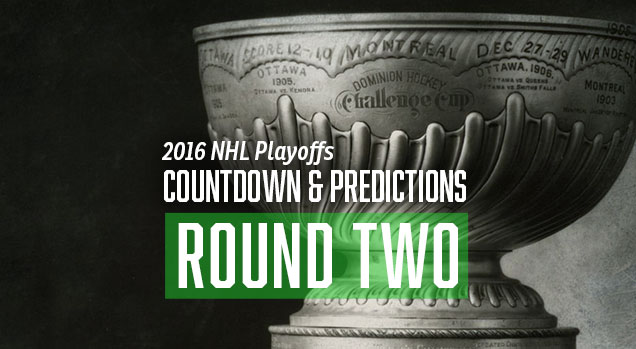 Time for Round 2. How’d it go in Round 1? Um…not great. 3-for-8 (Predators, Islanders and Sharks). But, there’s still 7 more playoff series left this year, so there’s lots of time for branding to redeem itself. 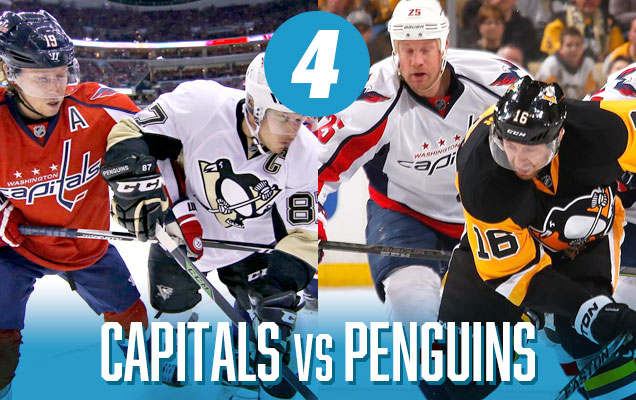 You know how, in the previous round (and on the Jersey Match-Up Countdown on Instagram), I considered the classic Penguins’ gold was the better compliment to the Rangers’ white jerseys? In this case, it’s their Vegas gold whites that work better with the Capitals’ jersey set. Both jerseys use similar fluid lines/stripes in their designs that compliment each other well, and the aggressiveness of the Caps’ red jerseys (and their contemporary design) are great against a more subdued and contemporary Vegas gold. That same Caps aesthetic, on their white road jerseys, then collides with the aggressiveness and different-era aesthetics of the Penguin’s classic gold throwbacks. So, the Washington games will look great. It’s the Pittsburgh games that drag this match-up down a bit.

The Caps have never had what could be considered a great logo, and they were ranked #24 in the league. It’s a typographical oddity now, and it was the same with the original it’s based on. The logos in-between weren’t much better (in fact, they were even worse). And while their current jerseys are the best they’ve ever had, that bar isn’t necessarily set very high either. Where they got tons of points though, is with the Weagle, their alternative logo – a classy and well-executed design – and their 2015 Winter Classic jersey. That thing is just stunning, works on so many levels, and worth drooling all over. 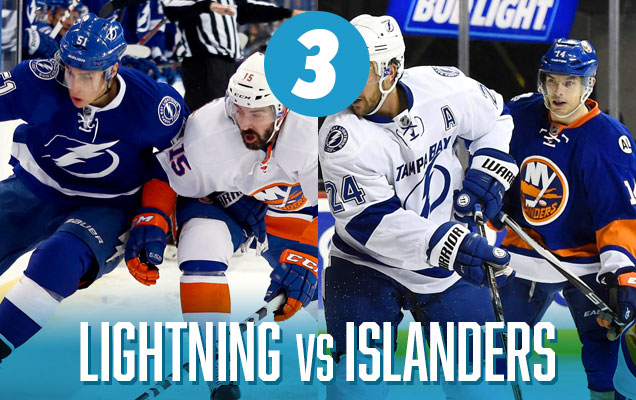 Ranking the fourth match-up was easy. The Top 3? Very difficult as they all look really great, for different reasons. But there’s no ties in Gary Bettman’s NHL, so at #3 is a great visual match-up, featuring two teams that have made a mess of their visual branding in the past and are now righting that ship, with two sets of jerseys that prominently feature two tones of royal blue with some white accents. And the Islanders bring a perfect amount of complementary orange into it, and you’re got a great colour scheme to work with. The fact that both jerseys then eliminate any extraneous and/or superfluous stripes in their jersey design – opting only for big thick solid stripes throughout – just ups the quality of the match-up visually. Yup, it’s pretty awesome.

As mentioned, Tampa Bay may have righted their branding ship recently, but it’s still not completely steady, particularly the overly-simplified and corporate-looking logo. And those new third jerseys are pretty inexcusable considering the superiority of their regular jerseys, and their previous third jerseys aren’t much better. And if we start diving back too far into the past, hoo boy. And their past logos have offered some pretty horrendous and illegible typography. Sure, they’ve had some on-ice success, and for a southern-US team, they’ve have a tremendous fanbase and community support, so it’s hard to count them out completely. And their matching up against a foe whose dealt with similar issues in the past.

Speaking of the Islanders, their visual branding history has been, well, spotty and inconsistent. The original/current logos and jerseys are great. Everything in-between? An unmitigated disaster. From Captain Fish Sticks to sea-sick numbers to horrible third jerseys to Alexei Yashin, they’ve finally righted the ship again. As mentioned, their current look is solid and has a legacy of success. Sure, their logo is kind of strange and wasn’t ranked that high, but it’s still iconic and represents the last time a team in North American professional sports won four championships in a row. Their Stadium Series (and former third) jerseys were well-designed and feature an iconic alternate logo. And then they dumped them for those awful black Brooklyn pyjamas. They just can’t help themselves, can they? 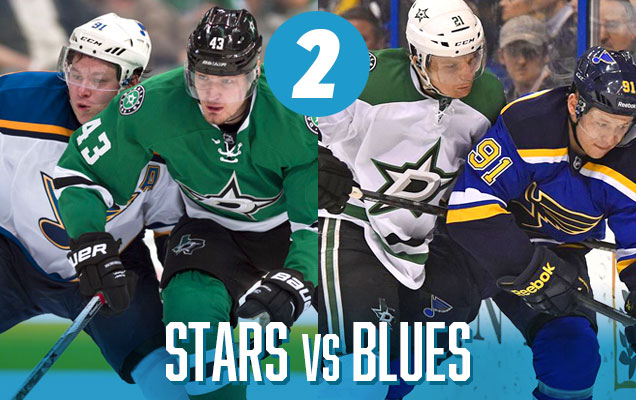 It’s not a classic red-vs-blue match-up, but I’ll still take this green-vs-blue anyday, especially when it involves two of the nicer jersey sets in the league. Both are modern designs with strong historical roots, boast a good amount of colour and simple (and consistent) striping patterns. Both of the white jerseys add a lot of colour to the match-up and both home dark jerseys are offset by a good amount of white and/or black. In what could be a real this of a series, it will be both fun and beautiful to watch.

Dallas hasn’t exactly had the best branding in their history. From the uterus jerseys, to the ill-conceived black and white jerseys without a logo on it, to the cheesy star-piped jerseys, to cheating to win the Cup (alright, just kidding about that one), Dallas has made many missteps since moving to Dallas from Minnesota. Their previous logo was ranked 27th in the league (time to updated the BTLNHL Countdown maybe?), and while the new one isn’t that much better…damn, at least they’re moving in the right direction with those new jerseys. Their new set is among the best in the league right now, bar none. It’s great to see them wearing green consistently again.

St. Louis’ logo is one of the best in the game, but up until  their current logo and jersey design, the Blues have been a nightmare. The previous logo was too rounded and hokey-looking (that’s hokey, not hockey) with a mishmash of primary colours, a “St.Louis” in the logo that’s pretty much unreadable on a jersey, and then a huge double-outlined “Blues” on their logo from before that (and still with the “St. Louis” on it, making it ever harder to read). But, the concept has been there from the beginning and has been tinkered with but never changed. Also a bonus is that their current third jerseys are great. But this monstrosity that they almost wore if not for Mike Keenan (thankfully) never allowing them to wear is absolutely unforgivable. That cost them a game right there. But still, overall, they’ve been relatively consistent in the visual branding and logo concept since their inception, and that’s more than the Stars can say. 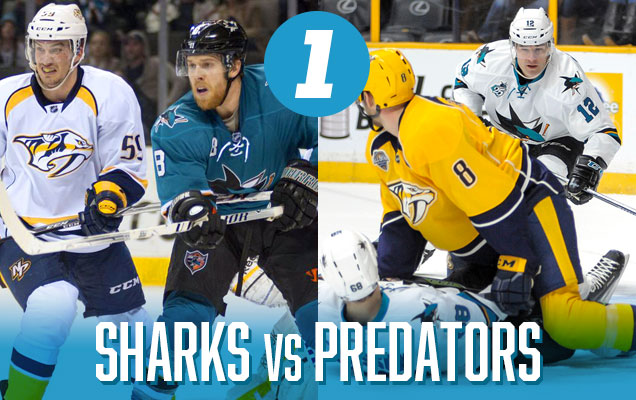 The top aesthetic match-up in this round is – admittedly – unexpected, both with the Nashville upset, and not who I would have pegged to sit atop this list. But the more I look at what the gold versus teal match-up, I just get mesmerized. Not just by the colours, but by the two jerseys that pair up surprising well together…both their home jerseys are aggressively colourful using very contemporary colours, and the teams’ respective whites balance the others out with modern lines and relatively simple design. And I’ll say it now…I’m a big fan of the Predators jersey set. They’re unconventional, but well-designed. And the Sharks teal jerseys are miles ahead of their black ones, so again, I’m glad they ditched those for these ones. It’s a great looking match-up. Enjoy it!

For the Preds, I’m not overly crazy about their logo, coming in at #18, and they had some design missteps (primarily their former alternative logos – checkerboard…really? – and third jerseys), but the fact they’ve made a solid go of it in a very non-traditional hockey market, have a solid fan base and developed a true identity of continually better than the sum of their parts is completely impressive. And as mentioned, their current jerseys are solid and a good improvement over the original and I’m bullish on their alternate logo. And their fans have latched onto the mustard yellow and own it. It’s – in a lot of ways – one of the few success stories in the NHL’s southern expansion. Tough series to call, but the fewer past mis-steps win out.

Agree? Disagree? Let us know in the comments or join the conversation on Twitter and Facebook! And don’t forget, we’re now on Instagram too. And check back for Round 3 in a couple weeks!

2 Responses to “NHL Playoffs 2016 (Round 2) Countdown and Predictions”