It’s that time of year again. Last year we had a battle royale of masks to pick the Stanley Cup champion of buckets, and Ben Bishop’s glowing masterpiece ultimately took home the hardware. This year we have a new pool of goalies and masks to match up head-to-head and a new champion to crown, so let’s get started with the first sixteen.

While the one and eight seed masks both lean heavily on team branding in their designs, artists Dave Gunnarsson and Franny Drummond took very different directions for their respective clients’ buckets. Steve Mason’s pays tribute to his teammates and Flyers of the past in a zombie-themed aesthetic, with back-from-the-dead depictions of Jakub Voracek and Bobby Clarke.

Holtby’s mask on the other hand is centered entirely around the Capitals’ branding, with the team word mark along the side and red and blue stars floating over a faded illustration of the team’s retired Capitol building logo.

The clean, crisp design of Holtby’s mask is one of my favorites in the league right now, but the artistry in the portraits on Mason’s mask are pretty fantastic, ultimately edging out the Caps’ netminder by a small margin. 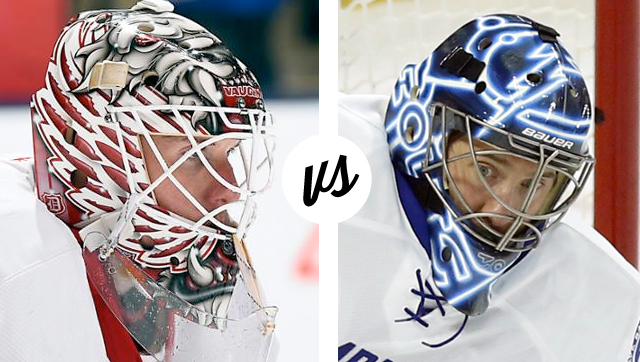 Last year’s bucket bracket showdown champion is back for a shot at another title, taking on Jimmy Howard, who’s sported some of the most colorful themed masks in the league. The Red Wings tender stuck with a more conservative regular season look again this year though from long time artist Ray Bishop. A simple red design with classic wings on each side, Howie’s only departure this season – relatively major by his standards – was adding the gargoyle like lion on top with glowing red eyes.

Bishop on the other hand opted for a TRON 2.0 mask, returning to his glowing aesthetic once again. The neon blue on black design spells out “BOLTS” along the side with the Tampa Bay logo on the top.

Like the Red Wings branding overall, Howie’s mask has a timeless look, but Bishop’s electric look just zaps the competition (see what I did there). Round one goes to the reigning champion by a landside.

In a pretty, pastel first round match up, Luongo’s pale yellow panther takes on Greiss’ baby blue Brooklyn bridge (alliteration ftw). Luongo’s mask – which I assume was designed by his long-time artist, Marlene Ross – takes a monochromatic approach to the Panthers’ branding, featuring only the team logo in pale yellow with white vertical stripes down the middle. The mask on its own is very minimalist, but it looks nice with the yellow details on the Florida jerseys (plus the ASG jerseys too).

Now I know why Luongo’s mask is yellow & white. He knew he’d be on the All-Star team so it matches the uniform. #NHL pic.twitter.com/6bYmeNRtLA

Greiss’ mask on the other hand, by Calgary-based artist Blake McCully, is a bit of a Jekyll and Hyde design. On the left side, the bucket has a bold, graphic illustration of the Brooklyn bridge, eclipsed by a diagonal stripe and silhouette of Long Island. On the right, McCully included Greiss’ signature monster face, which while very cool, doesn’t really fit with the aesthetic on the opposite side. If McCully had repeated the striping on the right and done something more in line with the style of the bridge, I’d be 100% on board, but as it stands, Bobby Lu takes round one over the Isles. 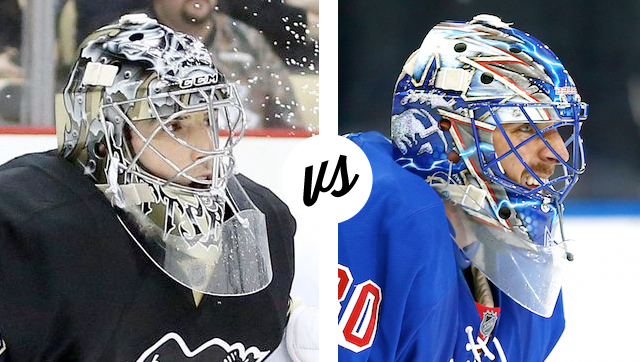 In this Metro-division showdown, both netminders’ masks have a lot going on, so let’s start with Fleury. Painted by Stephane Bergeron, Flower did a complete 180 from his graphic Tom Barrasso tribute mask and went for all the bells and whistles this season. With metal shards on the sides and a ghost on top, the detail of this design unfortunately gets a bit lost because the silver and gold are so similar in value.

Hank’s mask, the latest iteration of his Lady Liberty design with Dave Gunnarsson, once again ties the Swedish Tre Kronor to the iconic New York landmark with the razor-crown motif throughout the mask. The honeycomb pattern in the chin and glitter foil add extra pizazz, I suppose only fitting for the big apple.

The better contrast in King Henrik’s mask gives him the extra push needed to edge out Fleury and win round one by a slight margin. 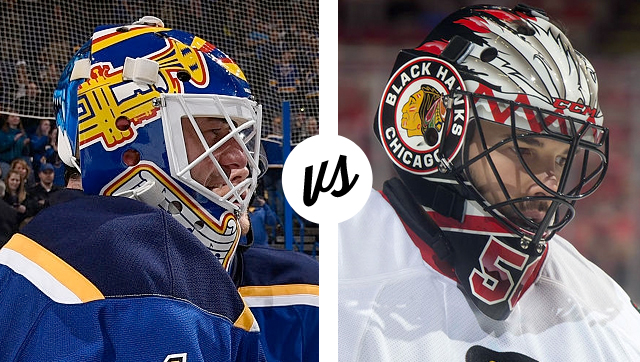 Elliott and Crawford have two of my favorite masks in the league this season but with completely different aesthetics. Elliott had two masks this year, but the real standout was his throwback CuJo tribute, painted by Toronto-based artist David Arrigo. The white cage and flat paint style reminiscent of the 90’s set beautifully off of the white-trimmed trumpets and sheet music.

Crawford’s mask also has a really nice clean and graphic aesthetic but is more contemporary than Elliott’s. The feathers and Hawks logo are the sole focus and pop right off of the black backdrop.

Both of these masks are really nicely done, but the retro flair of Ells’ gives the Blues netminder the extra bump to take the first round victory.

This first round matchup brings us perhaps two of the greenest and quirkiest masks of this year’s playoffs. Niemi’s is almost identical to the mask Arrigo created for him back in the 2010-11 season he was with San Jose. Both have the same tribal-flame motif on the side that has become somewhat of a signature for Nemo.

Dubnyk on the other hand is known for his colorful characters, having included his children as viking hockey players for this year’s Stadium Series, always with his signature cartoon giraffe. His regular season mask was equally as quirky with his long-necked friend painted on the side.

Neither of these masks really stand out to me design-wise, but the creativity of Dubnyk’s gives him a slight advantage to take over Niemi in the first round.

Well this one should be fun, eh? The Kings and Sharks face off in the first round again after a plot twist of a series just two years ago, but let’s get down to the buckets. Goaltending magician Jonathan Quick hasn’t changed his mask much at all over the past few years, and with two Stanley Cups to show for it, why fix what ain’t broken? Painted by Steve Nash, Quick’s battle armor mask is sharp and fits nicely with the team’s royal identity, but the all gray color scheme tends to fade into the background when compared to the more colorful and dynamic masks around the league.

On the other end of the ice, Sharks newcomer James Reimer has one of the most colorful signature masks in the league with the newest iteration of “Optimus Reim.” After a series of Transformer-themed masks in Toronto, Dave Gunnarsson created a Transformer shark for Reimer when he joined the club at the trade deadline. The machine-like detail and contrast between the teal mask and orange eyes look fantastic both up close and from afar, making this design really hard to compete with. In this case, Optimus Reim’s color and flash destroy Quick’s tried and true battle armor. 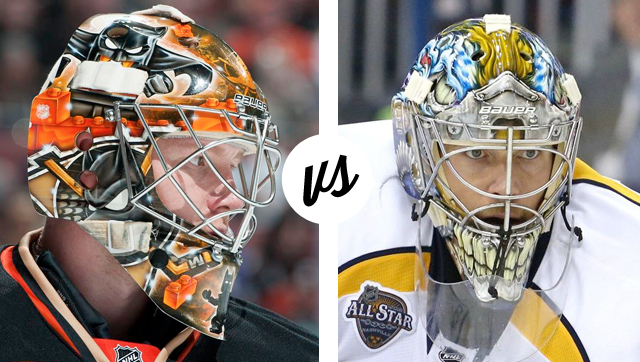 In our only Daveart-versus-Daveart match up of the first round, we have Freddie’s orange bat-duck taking on Pekka’s Mad Max creation. Following up on his lego goalie motif last season, Andersen once again shows us one of the most playful masks in the league with a lego hockey batman design with glow-in-the-dark accents. Rinne used some pop culture inspiration of his own, working with Dave Gunnarsson again for a Mad Max Fury Road design based off the character of Immortan Joe.

While the detail work in Rinne’s mask is pretty remarkable, the mustard yellow and baby blue color scheme isn’t the most aesthetically pleasing. The immense amounts of detail are also a bit overwhelming and get lost in the larger design, while in Andersen’s mask, the difference in scale between the detail in the figures and the detail in the background makes for an overall better composition.