The conference semifinals were what most people would call a bracket buster (well, my bracket’s busted at least). With Pittsburgh eliminating the Presidents Trophy winners in a game 6 stunner and the Sharks advancing over Nashville in a blowout game 7, the conference finals bring some unlikely masks head to head.

This round has a trip to the Stanley Cup Finals at stake, so let’s break down who would get a chance to play for the Bucket Bracket Showdown cup. 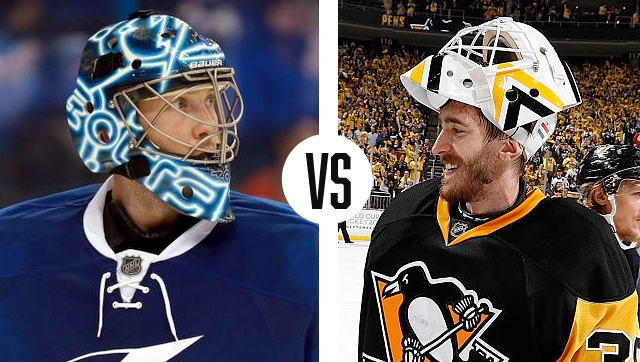 After stunning the Caps and dashing their championship dreams, Matt Murray and the Penguins advanced to the conference finals to take on the Lightning and defending Bucket Bracket Showdown champion, Ben Bishop.

Bishop’s mask doesn’t leave much to be said that we haven’t beaten into the ground already. Being the first and only goalie to really go full-out with the glow-in-the-dark paint effects, his electric Daveart creation is truly one of a kind and a standout in the league.

After opting not to go with a Floridian palm tree motif, Dave Gunnarsson sent Bishop a sample of the glow paint, prompting him to ask, “why don’t we make the whole thing glow in the dark,” to which Gunnarsson responded, “why don’t we?” Thus the dynamic, neon mask was born, creating a buzz around the league for its excitement and originality ever since.

At the other end of the ice, Murray brings two masks to the table, sporting a conservative vegas gold and white design and a Denis Herron-inspired retro look, both by Quebec-based artist Stephane Bergeron. Designed to pair with each of Pittsburgh’s home jersey designs, the rookie goaltender’s two buckets couldn’t be more different. Murray’s more traditional mask lost out to Braden Holtby’s patriotic Daveart design in the semifinals, for its lack of bold color or contrast couldn’t hold up against the vibrancy of a red and blue palette. Murray’s throwback mask however, based off the design of 70’s Pittsburgh netminder Denis Herron’s, is really fun and nostalgic. While it may not have the same electric feel (pun intended) as Bishop’s, it works perfectly with the Pens’ yellow third jerseys and pays homage to the team’s history (even if Murray doesn’t actually know who Herron is).

Murray’s vintage design may be on-point, but it’s still no match to dethrone our reigning champion. This one goes to Bishop. 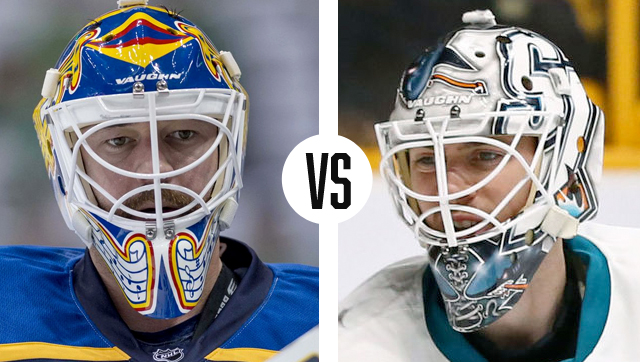 Out west in a maybe surprising match up for the conference finals, Brian Elliott and the St. Louis Blues take on Martin Jones’ San Jose Sharks. Both of these goaltenders have really great masks for similar reasons, so let’s start with Elliott.

Creating a near-replica of CuJo’s Blues mask from the 90’s with musical notes and instruments, Elliott’s bucket stands out in today’s game among a sea of overly complex and special effect-ridden designs. As we mentioned in the last round, nostalgia alone doesn’t necessarily make for good design, but artist David Arrigo brightened up Joseph’s iconic style and made it work for the new millennium. The colors coordinate perfectly with the Blues’ jerseys, and the crisp white sets off the bold primary colors in the mask really well.

Jones’ mask on the other hand tackles nostalgia and history in a more contemporary yet equally successful style. Artist Steve Nash of Eyecandyair celebrated the team’s 25th anniversary by creating a collage of logos of the Sharks’ past in a puzzle-like way that fits together flawlessly. The primarily white and teal palette works with both the Sharks’ home and road jerseys, and the hints of orange throughout give the design a little extra pop.

Both of these masks do a great job of giving a nod to their respective teams’ histories, but the bold colors of Elliott’s give his the tiniest of advantages to overtake Jones.