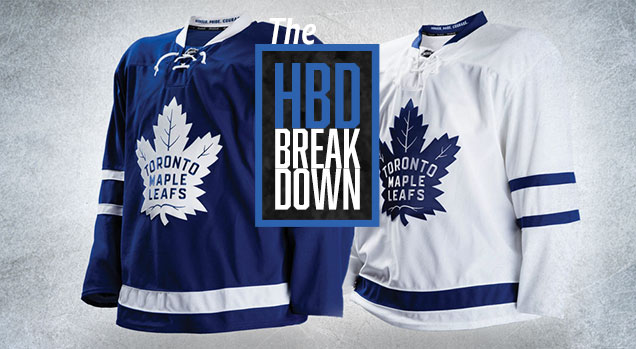 With today’s official announcement confirming yesterday’s leak, let’s breakdown the newly designed Toronto Maple Leafs jerseys to compliment the new logo that was unveiled a few months back. Because it’s an Original Six team and every ounce of the visual branding of these teams is treated like that formal dining room that never gets used in your grandparents’ house (don’t touch it! don’t move anything!), nothing much is new under this Toronto sun. 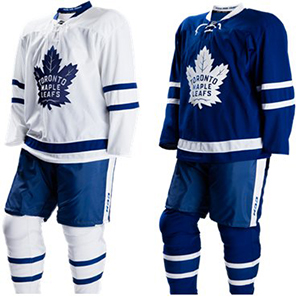 What’s new? Exactly the same amount of stuff when you’re asked that question by a casual acquaintance: Not much.

The logo is new, and we’ve already covered that in detail (see link above).

The stripes on the sleeves seem to be exactly the same. Same two stripes. Same width. Same gap between them. Save position on the sleeves.

The only change is the striping along the bottom of the jersey. They changed the two stripes from last season’s jerseys to one solid – and thicker – stripe. From the looks of it, the width of this new stripe is the same size as the gap was.

And apparently, there’s some new guy wearing the jersey?

Basically, they filled the gap and removed the stripes themselves from last year’s jerseys and called it a day. Again, this is a 99-year-old franchise that hasn’t seen a major jersey design change since 1937, so no one was expecting them to majorly rebrand themselves.

But I can’t really consider the only obvious change they made to their jerseys to be a positive one. It seems to be a merging the two dominant jersey designs in their history: the double-stripe they’ve used throughout most of the existence with the single thick stripe from 1970–92. And it creates a very inconsistent aesthetic. My OCD is making me nauseous just looking at it.

As for a judgement on it, well, it’s a strange juxtaposition…because the inconsistent striping is the most obvious element on the jersey, it looks bad, but because the striping is still so clean and minimal, it also doesn’t feel like something to majorly gripe about.

And the rest of the jersey is beautifully clean, minimalist and historic-looking. The inconsistent striping detracts from the overall design, but it’s doesn’t kill the jersey by any stretch. It’s still a beautiful jersey. It’s just got a weird quirk to it. Not loveably quirky, or even endearingly quirky, more like annoyingly quirky.

It’s balanced somewhat by the single thick stripe on the collar and the on the pants, so as a full uniform, it’s a little more cohesive. Still though.

Okay, there’s a couple other small changes to the new jerseys.

The thin stripes at the cuffs of the jerseys are gone. It’s a small change that doesn’t really affect the jersey, especially since the gloves cover that feature during games anyway.

The shoulder patches – which featured an historic-looking maple leaf – are gone as well since, well, it’s basically a replica of their new(old) logo. And so far, it doesn’t look like anything will replace them.

The typography has changed as well, going from something very traditional (blockish, with the angle-cut-cornered typeface) to something much more retro-modern. Still with angle-cut-corners, but decidedly less blockish. That’s a definite win right there. 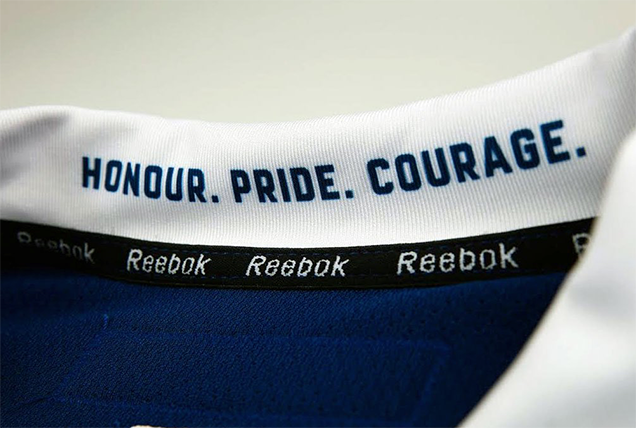 Also, “Honour. Pride. Courage.” is on the inside of the collar. Cool. A nice small detail.

And the logo is a bit larger on the chest than previous iterations of Leafs’ logos/jerseys, which gives prescience to Lou’s quote from the other day.

There’s not much of a change to call this a new jersey design, but the main change they did make (mainly the bottom stripe) knock it down a step from the previous season. Meanwhile, the other small changes actually make it a better jersey. So, let’s just call this a one-step-forward, one-step-back design.