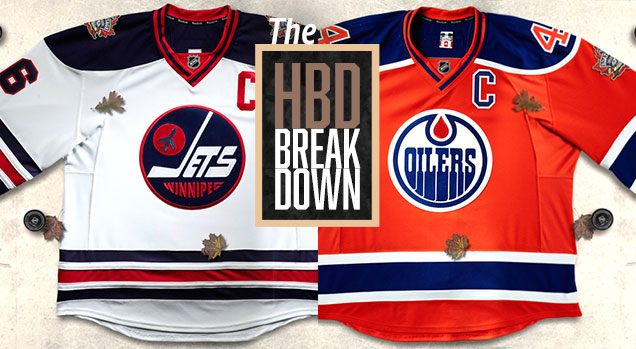 The latest instalment of the NHL’s Heritage Classic (read: Winter Classic for Canadian teams because Chicago isn’t in Canada) will be taking place on October 23rd at Winnipeg’s unsexily-named Investors Group Field between the Jets and the Oilers. And just last week, the official uniforms for said game were unveiled, closely resembling what the teams would’ve worn during the 1973-74 WHA game. We’ll break them down after the jump. 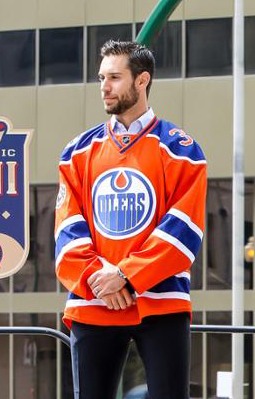 First off, there’s the Oilers, who unveiled that their specialty jersey from last season (a replica from their old WHA days) will essentially become their third jersey this season. We already broke this jersey down last year:

I don’t mind that the Oilers didn’t develop a whole new concept for this year’s Heritage Classic, as it’s already a heritage jersey and it’s only a year old, and they don’t have much more heritage to draw from. Plus, it’s just a great jersey. But let’s get to the real star of the day.

Everything Old Is New is Old Again 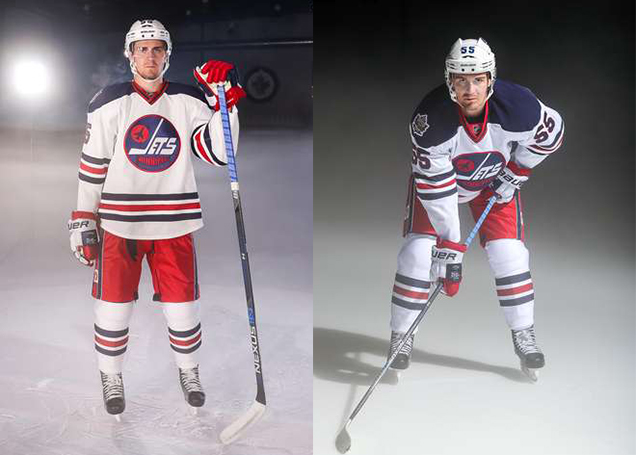 Count me among the many who are incredibly happy to see the Jets’ old (but not original) logo make an appearance on an NHL jersey again. And while some killjoys may point out that it technically belongs to the Coyotes’ franchise history (because something like that has never happened before), WHO. CARES. The classic logo has returned. And we’re all better for it. I make even say that this classic logo is better than their current one. At the very least, they’re on-par with each other. (And yes, both are better than their 1990–96 logo.)

The classic logo has more of a timeless quality to it, with some truly unique character to it – not so far off from the Oilers logo that they’ll be facing in the Heritage Classic. Quirky, charismatic, simple, well-constructed. The current logo has some nice elements to it, but it personifies the word “average”.  I’m imagining a lifespan of about 10–15 years before a refresh. 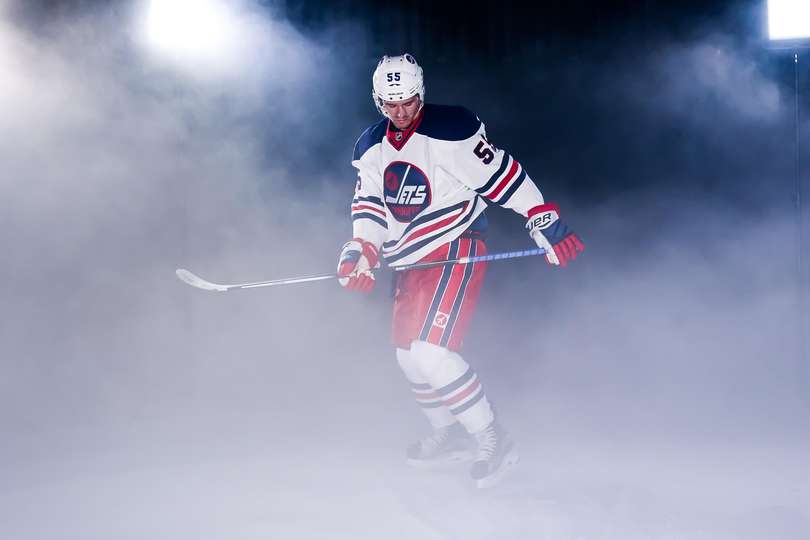 But this isn’t a treatise about a logo. The full jersey (nay, uniform) was unveiled, and it is about as beautifully classic as they can get. It looked good on Bobby Hull, but it looks even better on Blake Wheeler.

Part of that is the simple and elegant colour-alternating three stripes. It’s the simplest way to ensure that you’re going to have a classy, classic and well-balanced jersey design without breaking a sweat. Just ask Chicago or Boston. The alternating red and blue on Winnipeg’s jersey uses classic hockey colours on a pristine white background to full effect. It’s really on point.

Of course, it’s a borrowed look from the WHA’s Winnipeg Jets jerseys, which carried the same design for their entire 1972–79 WHA existence. Why they created new (inferior) jersey designs when they jumped to the NHL in 1979 will remain among the truly greatest mysteries of all time, like the Bermuda Triangle, what was in Marsellus Wallace’s briefcase, and how Adam Sandler keeps getting jobs.

And since they unveiled the full uniform, the socks mirroring the same triple stripe as the jerseys is great. Simple, classic and consistent. 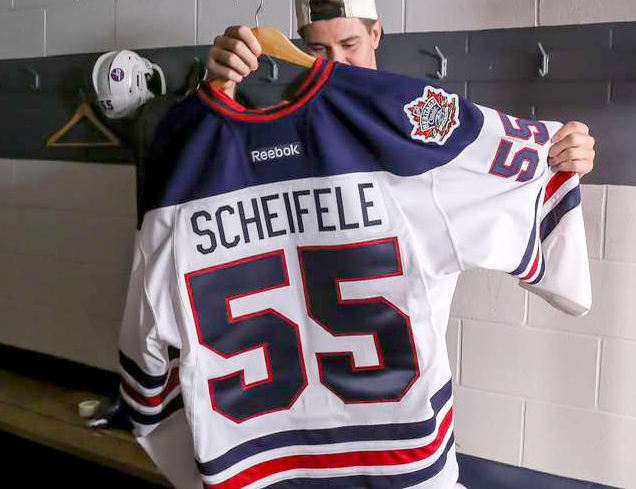 The only other details in the jersey include – firstly – the shoulder yokes. Simple, minimal and classic blue, with no outlines. As good as they can get on a jersey like this. It compliments the overall jersey design without distracting from it.

Secondly, the numbers and nameplates, which feature the standard cropped-off angles of traditional sports jerseys. The simple outline on the numbers, and none on the nameplates, are keeping in line with the old WHA jerseys. At least they didn’t go with that weird Comic Sans-esque typography and nameplate on their original 1972-73 jerseys.

Thirdly, the collar. This is the only place where the new jersey departs from the old WHA jersey’s design. The original jerseys had a simple red collar. The new Heritage Classic jerseys feature a blue stripe added in the middle of a red collar. It’s extremely minor, but somewhere, a designer decided to add that in, and it’s unnecessary. Maybe it was just meant to match the Oilers’ striped collar? No idea, but it’s the only thing I would change about this jersey.

Lastly, the pants. It’s never been common in the NHL for the striping on the pants to match the jerseys or the socks (jerseys to socks is much more common), but there’s generally an attempt to lessen the visual impact of the pants by making thinner stripes, or just having no stripes at all.

But, to the detriment of the jersey overall, these new Jets’ pants call too much attention to themselves, using wider stripes and a odd stripe pattern that is inconsistent with the rest of the uniforms. It’s a replica of the pants worn by the Jets from 1975–78 in the WHA, when a better choice would’ve been the simpler design of the 1974–75 uniform’s pants. It’s just too distracting and inconsistent. 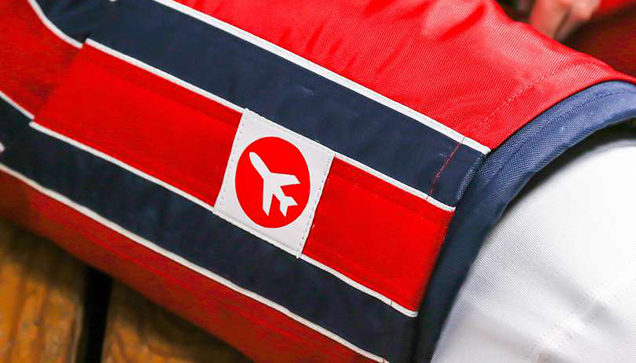 Now, do I love the inclusion of the circled jet from the logo in there? Yes, absolutely. It’s a really nice touch. But it would’ve worked on shorts with better striping as well.

Nothing can take away from a jersey that has such a classic, simple and elegant design such as this one. The striped-collar? Meh, whatever. That’s small potatoes. But, for the entire uniforms, the pants are the only detractor from what should be a visually-mesmerizing Heritage Classic in October.