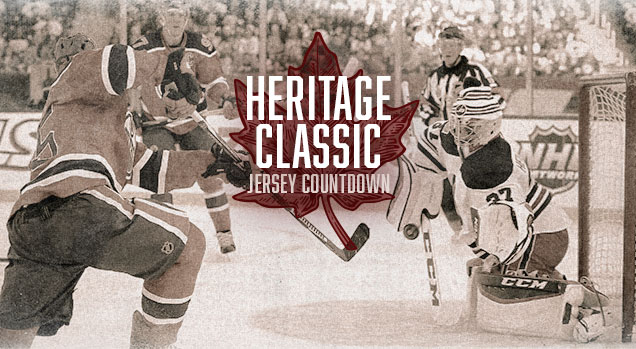 Over the weekend, the 4th instalment of the Heritage Classic (aka the Winter Classic for Canadians) was played between the Jets and Oilers at Investors Group Field in Winnipeg.

With Winnipeg having played, the only Canadian team that has not yet played in a Heritage Classic, somewhat ironically, Toronto – the biggest Canadian city of all. But, they got the Winter Classic in 2014 and will get the Centennial Classic this upcoming New Year’s Day, so nobody’s shedding a tear for the Leafs.

But, with 4 games featuring 7 teams in 8 different jerseys…well, that’s enough for a countdown I’d say! So here we go, the best Heritage Classic jerseys in the history of Heritage Classics, because Canada loves moments of Heritage.

The toughest decision when ranking these jerseys was to reward (a) creativity or just (b) overall design. I chose the former, because these one-off games are generally begging for one-off jerseys…and for the most part teams are happy to oblige so they can get some more money selling tons of new jerseys. 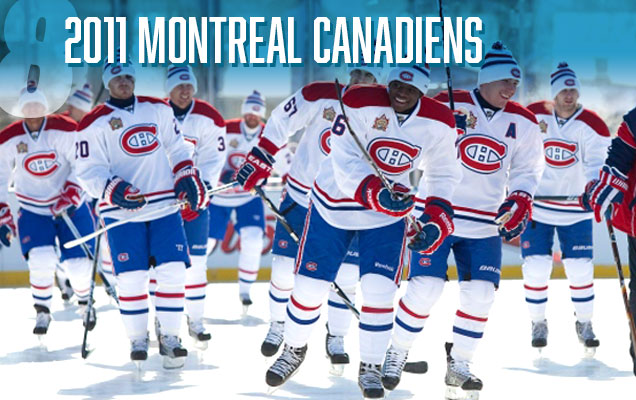 Enter Montreal. Don’t get me wrong, these are fantastic jerseys that would get near the top of any other list about jerseys and jersey design. But, for their 2011 Heritage Classic against Calgary, they wore the exact same jersey that they always wear with one extremely minor difference: there’s no extra white stripe around the numbers on the jersey. That’s it.

And this is in 2011. Four Winter Classics had already been played with all those teams involved wearing special one-off jerseys, so it was an understood tradition that it’s an opportunity to try wearing something new. But the Canadiens – an organization that prides themselves on being traditional to the absolute core – decided to wear their traditional jersey. Again, it’s a beautiful jersey. But a waste of an opportunity as well. Luckily, they more than made up for it with their 2016 Winter Classic jersey. 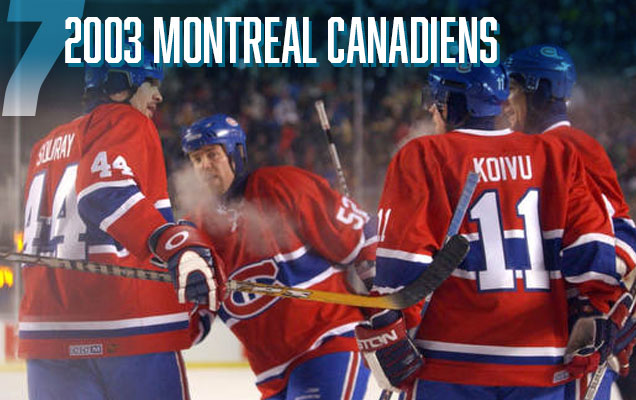 See above. But, it’s a more iconic jersey than their whites, so it slips up the ranking slightly. And it was also at the inaugural 2003 Heritage Classic, years before the Winter Classics started and one-off jerseys became a regular occurrence. So they get a bit of a pass. 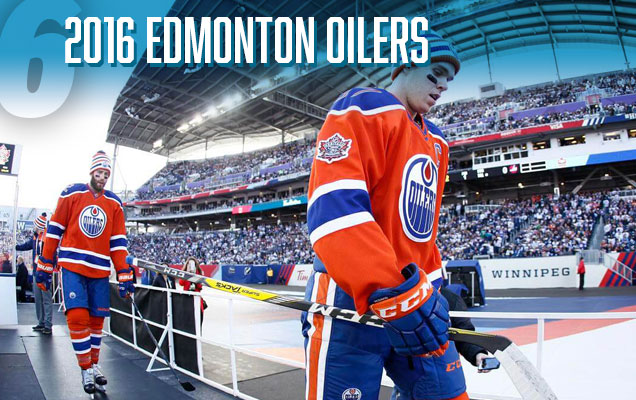 This one falls slightly in-between the creative/non-creative divide. For the game last Sunday, the Oilers wore last season’s World Hockey Association-inspired jerseys, which are this year’s third jerseys. So while they’re not part of their regular home-and-away set, they decided to just use that instead of creating something new for the latest Heritage Classic.

And it’s a defendable decision. Both the Jets and Oilers belonged to the WHA in the 1970s, and it’s a clear connection to their jersey heritage that – since they started wearing their original NHL jerseys full-time – isn’t extremely vast. With the Jets’ jerseys, it aesthetically re-created a 1973-74 match-up between the teams. So, it made sense. Which is what gets it into 6th place. 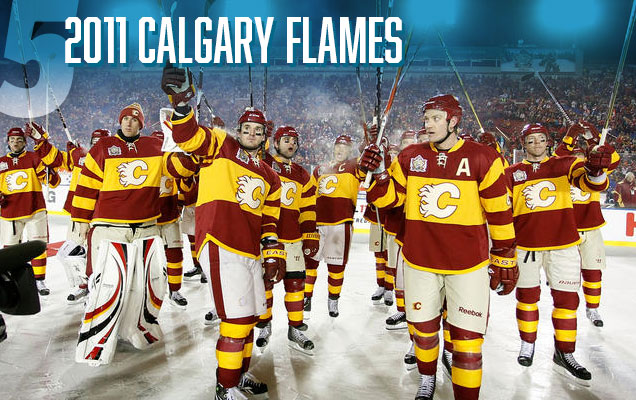 Gotta give it to Calgary…they went for it. I mean, they really went all-out. They were already wearing their “heritage” jerseys as a third jersey in 2011, so in the true spirit of historical heritage (that’s a thing, right?), they designed one-off uniforms that are aesthetically-bound to uniform design from a bygone era. Specifically, the 1920s, as these jersey are close replicas to those of the Calgary Tigers of the Western Canada Hockey League, and even played for the Stanley Cup in 1924 against none other than the Montreal Canadiens.

But the jerseys are changed from the Tigers’ colours (yellow and black) to the Flames’ colour palette (red and yellow) which, when used in the overabundance of stripes that was customary in the ’20s, has the unfortunate visual connection to a certain diabetes-inducing clown. Undoubtedly, the Flames realized this, thought “ah, fuck it,” and wore them anyway.

And you gotta give them points for that. I really love how the look authentically old and bring back a long-deceased era of uniform design. But so do some of the other ones coming up on this list. And they’re less clown-esque. 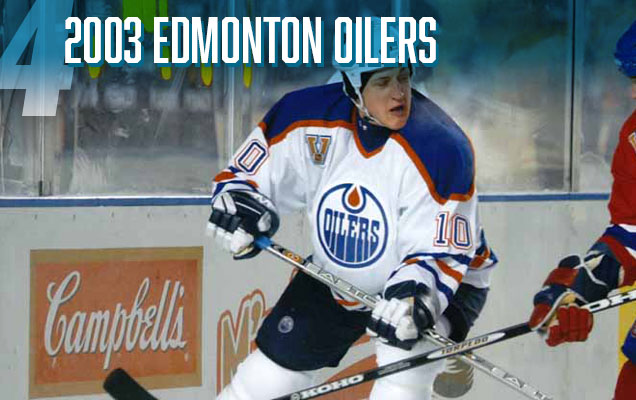 While these jerseys are pretty much exactly what the Oilers currently year, you have to remember that in 2003, they were 8 seasons removed from the last time they wore them. The Oilers of that era were neck-deep in navy blue, red and copper, as well as promoting an ill-advised third jersey/logo. So, seeing these jerseys again on the ice after almost a decade in retirement was like a revelation. It still took them another 5 seasons to bring them back, but I’d hypothesize that this set those wheels in motion.

These classic Oilers whites have seen some good days, and they’re well-designed jerseys that looked great in the inaugural Heritage Classic, back when outdoor games were still a novelty and one-off jerseys weren’t common, so them simply delving into their past makes some sense. 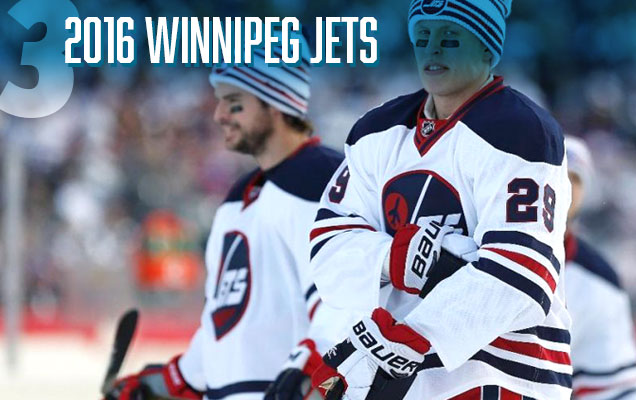 These Jets jerseys are really great. Maybe a part of it is the warm nostalgia of seeing the classic Jets logo hit the ice once again. Or maybe it’s also because the design of these jerseys are an excellent example of classic jersey design.

The alternating tri-stripe on the sleeves and bottoms of the jersey is a classic hockey aesthetic that makes almost every jersey that uses it look great (see Boston and Chicago, for example). The classic shoulder yokes compliment the simplicity of the classic aesthetic of the rest of the jersey. And it looked great on the ice, mimicking the Jets’ WHA 1973–79 jerseys. 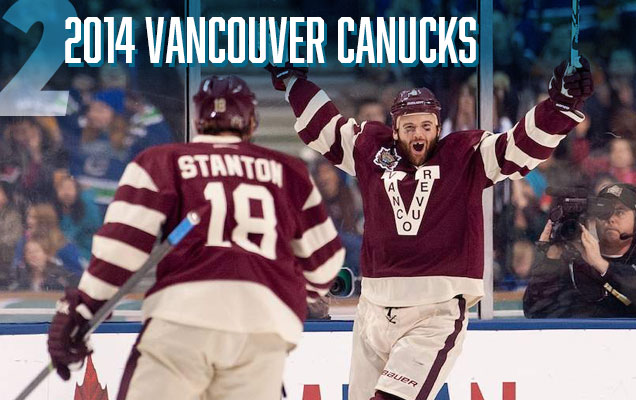 Just like the Flames in 2011, the Canucks drew inspiration for their Heritage Classic jerseys directly from the early-20th century era of jersey aesthetics, this time mimicking the only Vancouver team to ever win the Stanley Cup, the Vancouver Millionaires. And it’s absolutely wonderful, looking like an authentically historic uniform, but decidedly less clown-like.

Part of that is because of the colours used. Instead of bringing in their current blue and green, they kept the burgundy and beige colour combo – a smart choice. It manages to be both unique throughout the league (only the Avalanche wear burgundy, and they use it with blue), and still look like a classic hockey jersey. Are the sleeve stripes a bit much? Sure. But it’s balanced by a minimal looks everywhere else on the uniform, with few stripes elsewhere.

And the logo is beautiful typographical oddity, again going back to an historic hockey aesthetic, but it’s unique, bold and distinctive, so what’s not to love? 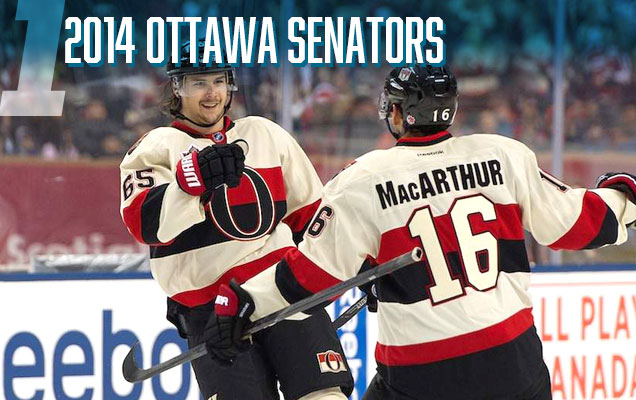 But the Canucks got outclassed (both on the ice and in their attire) in the 2014 Heritage Classic by the Ottawa Senators. A team that’s never really been known for great jersey design at any point in their history, the Sens took the one good jersey they’ve worn, and made a road white version of it. And it works incredibly well.

First off, the simple “O” logo is fantastic. Minimal, classic, bold, and a throwback to the original Ottawa Senators from the NHL’s first couple decades. The striping is simple, distinctive and a perfect balance: there’s just enough stripes to give it an historic aesthetic, but not enough to push it into the comical realm. And the off-white works great in the context of a one-off “heritage” game.

It’s just a great, well-balanced modern take on a historical jersey aesthetic. And it gets top spot on this list.