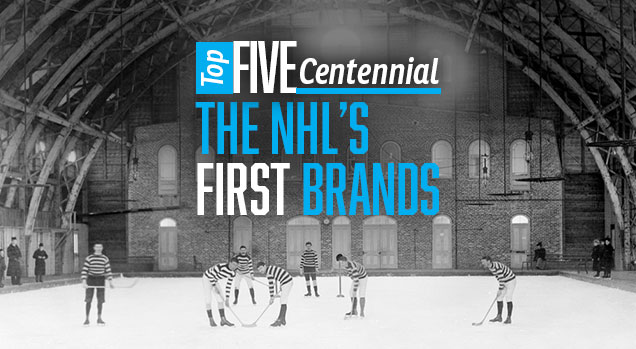 So, you’re a pretty big hockey fan, huh? Well, you’ve come to the right place. Not everyone in your life may be in awe of that throwback ‘Whalers’ t-shirt you wore last Thursday, but here at HbyD we see you, and want to offer you the highest of high-fives. I bet you can even name “The Original Six” teams that are revered by hockey culture as though they were holy saints.  What if I told you the rabbit-hole goes deeper than that, bub? I’m here to tell you about the real Original Six…err, I mean five. 100 years ago, the National Hockey League was born from the ashes of the Canadian based, National Hockey Associaton (NHA). The newly formed NHL consisted of 4 Canadian teams (plus one more team that didn’t starting playing until two years later), with 5 unique team brands. In this addition of “Top 5” we’re going back 100 years in history, to break down the visual elements of these original NHL pioneers. Grab a sweater, it’s going to get chilly in here… 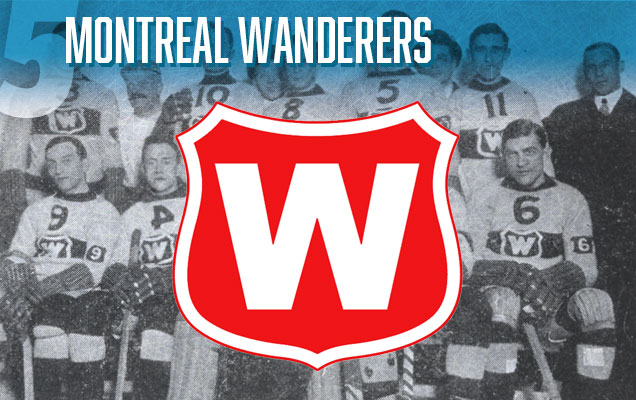 Impressively, this Montreal team only ever played four NHL games before their arena burnt down, making the Wanderers permanently…LOST. Geez, I really went with that pun, huh?  Shameless, I know, but they were asking for it. Anyway, the team’s short-lived branding consisted of a logo featuring a white letter ‘W’ on a red shield. Though they did have a unique team name, they also had an unofficial nickname, the “Redbands”, which was inspired by the red colored bands across their white sweaters.  Now, I don’t mean to be a buzzkill about their cool nickname, but honestly from a design standpoint, the red band interfered with that nice red-shield logo they had, which still seemed to sink into the background even though they put a white stroke around it. If the team re-branded today, I would suggest that they move the red band down to the bottom of the jersey, as you see on modern NHL uniforms or change the color of the shield to increase visibility.

Fun Fact: The centered color band on jerseys would eventually become an iconic trait of the Wanderers arch rivals, the Montreal Canadiens.

Even though the Athletics (also commonly known as the Bulldogs) were included in the original NHL expansion, they had financial difficulties and did not end up taking the ice until 1919. Previously, they had won the Stanley Cup in both 1912 and 1913, as part of the NHA. Like most sports teams from this era, their logo and overall brand identity were overtly simple, the ‘Q’  being the simplest on the list. A version of the team’s capital letter ‘Q’ logo can be seen being worn by goaltender Walter Rooney, while the rest of the team opted for the full city name of ‘Quebec’ across the chest, as white letters, on a blue-band. If the Athletics didn’t eventually become the Hamilton Tigers allowing the rise of the Toronto Maple Leafs, I think they really could have come to own this blue and white color scheme, which was the strongest part of their branding, proof being, that some years, they didn’t have the ‘Q’ or the city name on the sweaters at all, and went with plain barber-pole style stripes, a common sweater style during the time.  To conclude, I have to mention that “Bulldogs” is a strong and timeless sports team name, maybe the best in the expansion, which helped keep them out of last place on this list. 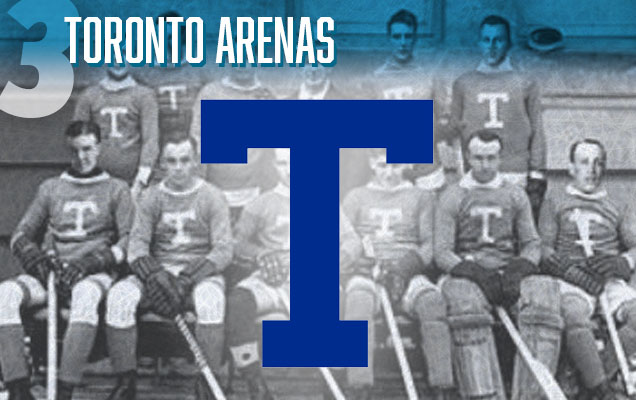 The Toronto Arenas were previously called the “Blueshirts”, and sometimes the “Torontos” (really original, right?). With humble beginnings this franchise laid the groundwork for the eventual NHL darlings, the Toronto Maple Leafs. The Arenas original logo was a simple slab-serif white letter ‘T’ set on a navy blue sweater (which the Maple Leafs brought back this year, in a small way, in the Centennial  Outdoor Classic game). The team’s uniform design in their second NHL season was a little more interesting, featuring the ‘Arenas’ team name across the sweater, curiously interrupted by their ‘T’ logo front and center, causing me to read it as ‘ARETNAS’ the first time I ever saw the uniform. A trait of this version that I do like however, is the 6 thin white stripes on both arms, which successfully breaks up the monotonous tone of the blue sweater and is a unique solution as far as stripes were being used by teams of this era.  Name readability, be damned. I actually like this sweater, overall.  Defenseman Harry Cameron managed to look absolutely murderous while wearing it. Respect. 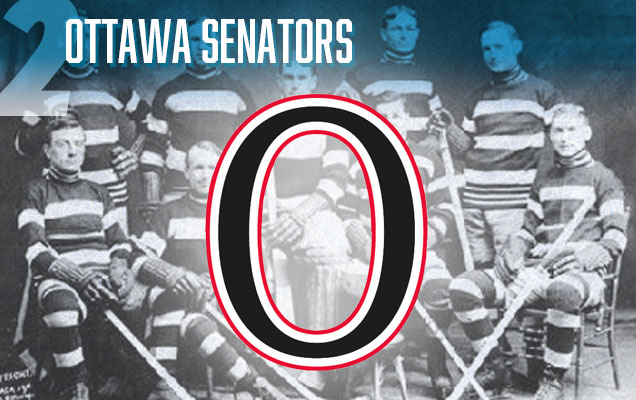 This team is technically a different franchise from the modern day Ottawa team who began play in 1992. The original Senators had existed for 33 years prior to joining the NHL in 1917, bringing with them a well-established brand history. Their classic look consisted of alternating black, red and white stripes was carried over from the NHA (seriously, the early 20th century LOVED stripes) and were worn without a logo on the sweater, notably ditching the crossed flags of the United Kingdom and British Red Ensign introduced during the 1914-15 of World War I. So, why is such a simple branding ranked so high on the list? I have to emphasis that this brand was well established at the time, being one of the premiere hockey clubs in existence. Their classic black ‘O’ logo did exist as early as 1915, as seen in this terrible quality photo, but was not made a permanent uniform fixture until 1929. The ‘O’ lives strong today on the modern Senators popular third jersey, which also includes a nod to their original barber-pole stripes.  It’s a great look, that we recently suggested could be their primary uniform, which is a testament to the strength of their original branding.

Fun Fact: The Senators were league champions 5 out of the first 7 years of the NHL. 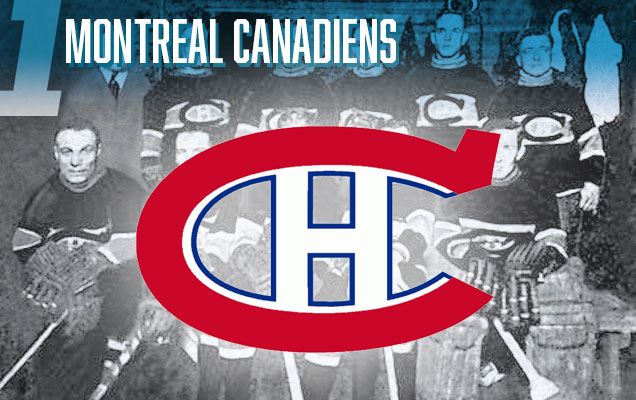 Is anyone surprised that the Canadiens took the top spot here?  When you consider that this franchise has only made minor adjustments to their brand identity over the course of 100 years and is still one of the strongest brands in the modern NHL, is simply astounding.  Their 1917 NHL season was the team’s 9th year of existence, previously known as “Club Athletic Canadien” they had a letter ‘A’ inside of the red ‘C’ logo. When their name became “Club de Hockey Canadien” the ‘A’ was replaced with the ‘H’ that we know today (That means that the ‘H’ actually stands for ‘Hockey’ and not for their Habitants/Habs nickname).  It’s kind of amazing when you look at the team’s 1917 uniforms and see the major elements of the modern Canadiens uniforms already there: the logo, their trademark thick blue stripe across the chest, and bordering white stripes. The lesson learned here is that when you have this strong of a design concept, the need for revisions later on is greatly reduced, so much in fact, that the Habs have to get creative when coming up with ‘throwback’ or ‘heritage’ jersey designs due to the fact they basically already wear a throwback uniform.  That’s the kind of problem that any franchise that wants to last forever wishes to have for themselves, and makes us wonder which NHL brands will survive the next 100 years?…If we’re making bets here, my money is on the Canadiens.

Fun Fact: The Montreal Canadiens have won 25% of all Stanley Cups.