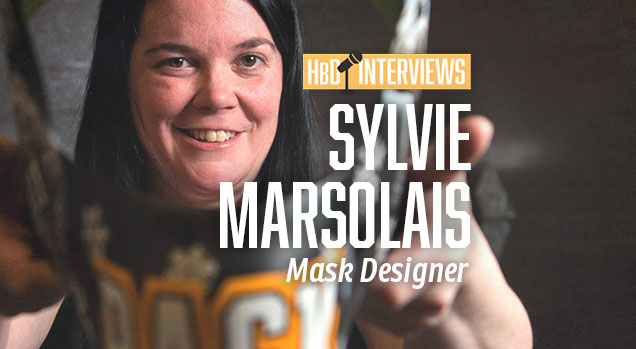 If you’re a follower of our mask roundups, you may know the name Sylvie Marsolais or that of her studio, Sylabrush. The Quebec-based artist has worked with a number of NHL goaltenders including Tuukka Rask, Craig Anderson, Ben Scrivens and more. Sylvie was kind enough to give us some insight into her background, process, and that viral color-changing paint that she recently pioneered.

Artistic Beginnings
With a love for drawing since a young age, Sylvie’s path into airbrushing goalie masks was a natural one. “I’ve always like[d] to draw,” she shared. “I’ve also had a passion for hockey and more specific[ly] for the goalie position.” A goalie herself, Sylvie studied art in school before taking a private lesson in airbrushing as a first taste of what being an airbrush artist is all about. “I wanted to be sure that I would like to paint with that tool; also to see if I [had] some skills before buying all the equipment.” Mastering the tools didn’t come quickly or easily though, Sylvie revealed. “I’ve improve[d] my skills with the project[s] that I’ve worked on over the years, [and] the experience that I gain by painting them.”

Sylabrush Goes NHL
After opening her studio with artistic mentor Alex Mathys, the duo got their first taste of painting NHL masks in 2011 when Jean-François Bérubé was drafted by the LA Kings. “We started to work with JF in 2009 when he was playing in the QMJHL with the Junior de Montréal,” Sylvie recalls. “In 2011 we painted our first LA Kings mask for him when he was playing for the Ontario Reign. For us it was our first NHL paint job even if JF wasn’t playing for the LA Kings at that moment. He’s now playing for the New-York Islanders and we are still working together on his paint job!”

A Tale of Two ‘Classics
Sylvie and Alex paint an average of 80 masks per year, working with their clients to generate ideas and then brainstorming together to develop a creative concept. “Alex is overwhelming [with] ideas!” Sylvie shared. “When the idea is set, we create a sketch.”

Sometimes those sketches have time to evolve on their own, and others? Well, not so much. In 2016, Sylabrush was responsible for not one, but two of the masks in the Winter Classic, one for Bruins netminder Tuukka Rask and the other for Canadien Ben Scrivens. “For Tuukka we had more time to paint it,” Sylvie recalls. “A lot of people were involved in the creation process; people from the Bruins organization, Tuukka and us. We had the time to do a lot of modifications before the final result.” That final result was a Patriots-themed masterpiece that even found itself a home in the Patriots Hall in Foxboro. From the executive director of the Patriots Hall, Bryan Morry, “the attention to detail is incredible and fans now have the chance to see what is truly a work of sports art.”

Scrivens’ mask for the event had a slightly different process. After getting traded to Montreal less than a week before the Winter Classic, Sylvie and Alex were tasked with designing and executing a mask in a mere 24 hours. “For Ben Scrivens, we could paint anything we’ve wanted because of the short notice, so we tried to maximize the 24 hours the best we could to paint his mask.” The marathon paint job is nice even by regular standards, but knowing the constraints of an incredibly compressed timeline makes the final product all the more impressive.

If You Can’t Take the Heat…
In the current era of special effects making a splash on goalie masks (looking at you, Daveart), Sylvie has pioneered a new technology in the temperature-sensitive SubZero and Ghost paints. “For Anton Khudobin and Andrei Vasilevskiy, we used the SubZero paint that change[s] colors at cold temperature, so on the ice, the SubZero paint will be darker, and at room temperature it will be lighter.”

On the flip side, the Ghost paint is heat-activated, as seen on Craig Anderson’s Senators 25th Anniversary mask. Heat activation may seem like an odd choice for a sport played on a frozen surface, but Sylvie begs to differ. “The Ghost paint needs hot temperature to be revealed, [so] it’s not very useful on the ice, but we can hide stuff that the goalie wants on his mask but doesn’t want to be seen by everyone.”

The color changing effect does add another level of complexity when designing the mask, but Sylvie doesn’t seem too phased. “If we use the SubZero or Ghost paint it will influence [the design] because we have to think first where we are gonna put it and how it’s gonna look on the ice too.”

Work in Progress
Now years after taking that first airbrushing class and practicing on any surface she could get her hands on, Sylvie’s career has blossomed into that of a revered goalie mask artist. “Me and Alex are also both goalies, so painting on masks was what we liked the most. When I started airbrushing I was painting on anything (motorcycles, walls, helmets) but now we are only painting goalies masks and we enjoy it everyday!”

When asked which mask was her favorite, Sylvie simply couldn’t choose. “I don’t have a favorite paint job. It’s mostly the last one I’ve just finished because painting a mask is a long process, and we are starting it from scratch, so at the end when I [see] the final result on the mask, I’m really proud of what we came up with!“

Thank you, Sylvie for your insight. To see more amazing Sylabrush masks, be sure to check out Sylvie’s work on Instagram and Facebook!