With the Centennial and Winter Classics in the rear view, our attention has shifted back to outdoor hockey with the lone Stadium Series game this year quickly approaching. In a battle for Pennsylvania (that surprisingly still doesn’t feature the Blackhawks), the Penguins and Flyers will play at Heinz Field on February 25th.

The Pens and Flyers’ jerseys were revealed a while back, but the masks are starting to roll out, so let’s take a look at what we’ve seen so far.

Penguins’ equipment manager Dana Heinze revealed the Pens’ netminders Stadium Series masks on Twitter, the first being young gun Matt Murray’s. Almost identical in composition to Murray’s regular season mask, artist Stephane Bergeron of Griff Airbrush used the Penguins’ primary logo in the foreground on each side with the Pittsburgh skyline in the gold stripe down the middle.

Behind the logos where musical notes sit on his regular season mask are a flurry of gold foil snowflakes filling out the negative space.

From Murray’s past descriptions of his masks, it seems the goaltender likes to keep things simple, and this design does just that to perfection. 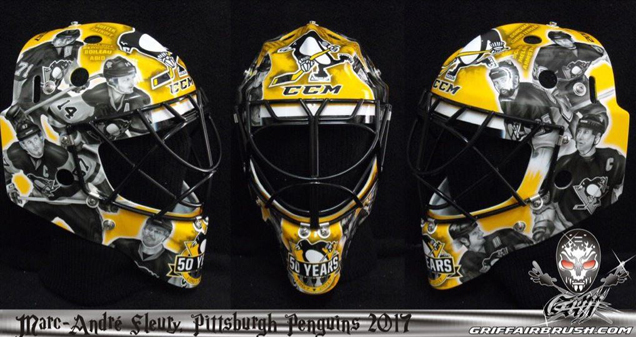 In celebration of not just Flower’s twelve year history with the Penguins, but the club’s 50th anniversary, Fleury and Bergeron decided to pay tribute to some of the goaltender’s favorite teammates.

“There are guys that helped me out when I came in (to the league) and guys that I played with for a long time, guys that were good friends,” Fleury told the Pittsburgh Tribune-Review. “I feel bad if I left out some guys. Just had this much room on it.”

With the impending expansion draft and the emergence of Matt Murray as starter-ready, many have speculated that perhaps this mask is Flower’s way of saying goodbye to the team he’s spent so many years with. A creative thank you or a subliminal parting message? I guess we’ll have to wait and see.

Using one of the sneaky best styles in mask design (if you follow our mask roundups, you probably know how much I like matte paint), Pennsylvania artist Fran Drummond crafted a slick matte helmet for Steve Mason to sport at Heinz Field. Matching the Flyers’ jerseys and Mase’s pads for the event, the all black bucket is clean and straight to the point. “He said ‘I’d really like to just do two Flyers logos on each side and the name plate and that’s it and go really flat, black stealth, so I’ll look all blacked out,'” Drummond told NHL.com.

The small touches of fine detail in the “stitching” around the Flyers logos and Stadium Series logo on the back plate really show off Drummond’s precision and technical abilities while still keeping the design simple and bold. We’ve seen a number of other goalies and artists take this approach for outdoor games in an attempt to keep the designs visible from long distances. Broad Street Hockey really summed it up best – “minimal goalie masks are really under-appreciated nowadays, especially ones that avoid airbrushing all together. Black, orange, Flyers logo, what else is really needed?” 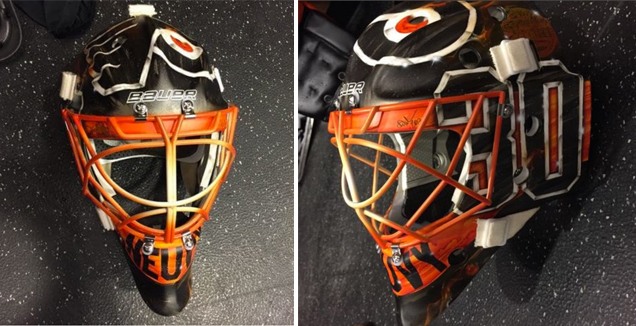 With just days before the game at Heinz Field, Dave Isaac of the Courier Post revealed Michal Neuvirth’s new mask for the outdoor contest. Sticking with a simple black and orange palette, the detail in the design is anything but (in true Daveart fashion). Dave Gunnarsson, Neuvirth’s regular artist, did pair down the special effects for this mask, but the fine detail is still there throughout. “The closer you come the more details you will discover, and the mask transforms in front of your eyes,” the artist explained. “Just as usual you will also find the castle from Michal’s hometown” which he created with a sketch pen.

Like his teammate Mason’s, Neuvirth’s mask is all black with an orange stripe running through the middle and “Neuvy” stenciled in all caps around the chin. “It is created in a totally old school way,” Gunnarsson shared on Instagram. “All inspired from Flyers awesome Stadium uniform.” His number 30 stands as the lone element on each side in black lettering with chrome-style trim matching the accents on the Flyers logo on top. Keeping function front of mind, he orange and white gradient cage is actually white on the inside, as not to blind poor Neuvirth while wearing it.

Compared to other Daveart creations, this mask is actually quite simple which makes sense for a stadium game. It’s hard to compete with Mason’s hyper-crisp design, but both of these buckets will look really sharp with the Flyers’ unis this weekend.