The Devils has been the model of consistency since moving from Colorado to New Jersey in 1982. While some teams seemingly announce new jerseys every couple seasons, the Devils have only done one major change to their uniforms in the 35 years of their existence (even though that’s apparently going to change next season). And they’ve never worn a specially-designed third jersey, or a special event jersey, or anything like that. In 35 years. Let that sink in. But this series is called Worst to First – not Worst and First – so we’re going to throw in the jerseys worn for the entire franchise into the mix as well.

Here’s how this works: I’ll count down, from worst to first, all the jerseys the Devils (and their franchise predecessors) have ever worn. Homes and aways will be lumped into the same category (so, more of a jersey “era”) and I won’t worry about small changes (like slightly changed positions of piping for example). Third jerseys will stand on their own. And I’m focusing on the jerseys only, not the entire uniform. The jersey images are compliments of Chris Creamer and the fine people over at SportsLogos.net. For the Devils/Rockies/Chiefs, there’s 4 different jerseys/eras (4…for 3 different teams!). And we’ll start with the worst one.

Also, if you see an italicized link (like this one), it’s leading to a pop-up image that may help you visualize what I’m talking about, not a whole new webpage. 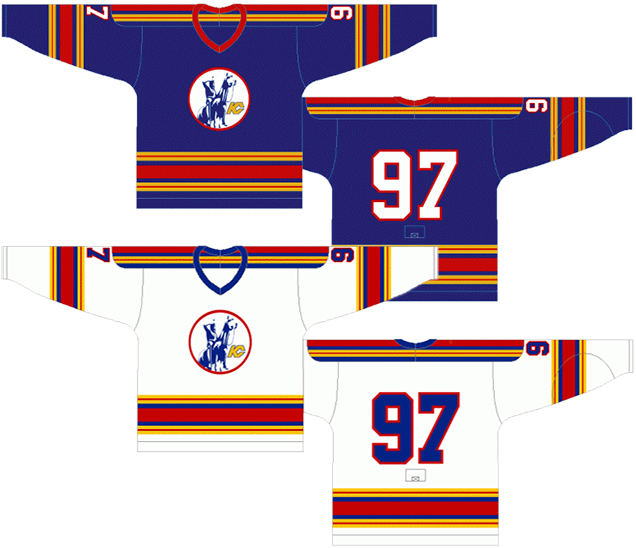 Is there some sort of significance of circuses in relation to Kansas City, because that’s the only reason I can think of to explain those striping patterns, especially on the shoulder yokes. As far as I can tell, the Scouts win the contest for the most amount of stripes on a NHL jersey’s shoulder yoke, with 11 from front-to-back on their white jerseys (blue, yellow, red, yellow, blue, red, blue, yellow, red, yellow, blue), beating out the 9 on these Blues jerseys. This contest does not include sleeve stripes, by the way.

But when you have this many stripes on a jersey using only the primary colours of red, yellow and blue, it all gets a tad nauseating. And it’s hard to take anything else on the jersey seriously, especially since the logo itself doesn’t get close to the same level of craziness as the jersey does, showing impressively comparative restraint – with a single-coloured illustration of the iconic Kansas City statue with a stylized KC crest.

But because of mismatch of styles, the focus of the entire jersey becomes everything but the logo, the one element that should be focused on more than anything. You can’t help but stare in horror at the onslaught of stripes just waiting to stab their way through your corneas. It’s like those circus clowns that dress the part, but you can tell something just ain’t right.

At least the striping patterns are consistent?

The only saving grace is that these jerseys only lasted 2 seasons before relocating to Denver. And they looked just as comical on the ice…especially when you throw on a headband with it. Lebron got nothing on Henry Boucha.

Jersey Recommendation: #10 Charron. Guy Charron was easily the most prolific offensive player on the Chiefs, recording 113 points in 129 games. In his second season, he scored 71 points…and was -51. So, obviously not defensively-inclined. And these jerseys are pretty offensive overall, so it’s a good fit. Get it in the blues, which at least has slightly less stripes on the shoulder. 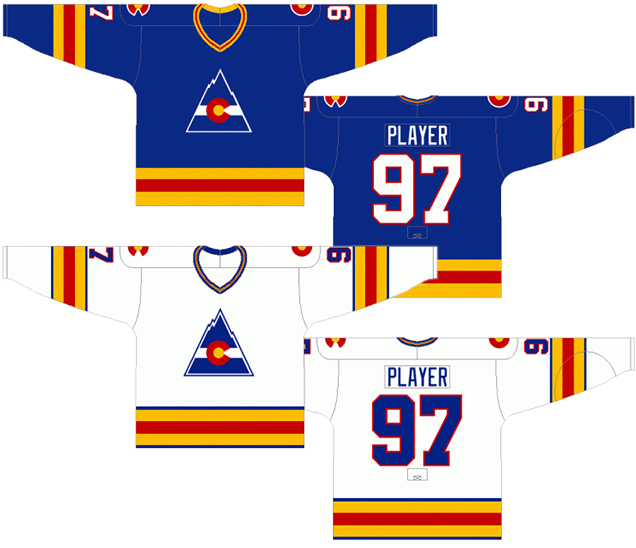 A little bit better…but not by that much. We’ve still got the circus-esque blue/red/yellow colour scheme, but at least here it’s more justifiable considering the colour of the Colorado state flag – which also heavily influenced the Colorado logo. And there’s less stripes overall, especially since they eliminated the shoulder yokes.

Somehow, compared to Kansas City, these jerseys are the model of restraint and elegance…as circus jerseys go. This is the circus clown that just looks more fun than sinister.

Otherwise, the Rockies and Scouts jerseys are remarkably similar: blue and white jerseys with consistent blue/red/yellow striping patterns. The problem with the Rockies jerseys is – ironically – the fewer stripes means that red and yellow are more dominant on the jersey, destroying any sort of balance between all the super-intense colours. If you’re going to use red, yellow and blue on your jerseys, you have to give one colour more prominence while the other two are strictly secondary (see previous Panthers jerseys), otherwise you get an onslaught of colour like what you have on these jerseys.

But, I’ll totally admit, these are enjoyably abrasive jerseys: colourful, fun and unlike anything we’d see today. And that last part is the only thing that allows us to enjoy them.

Jersey Recommendation: #9 McDonald. A one-time captain of the Rockies, he has a legendary giant red moustache that fits in perfectly with the jersey. And he’s the first player that comes to mind when I think of the Colorado Rockies. Get it in the blue. 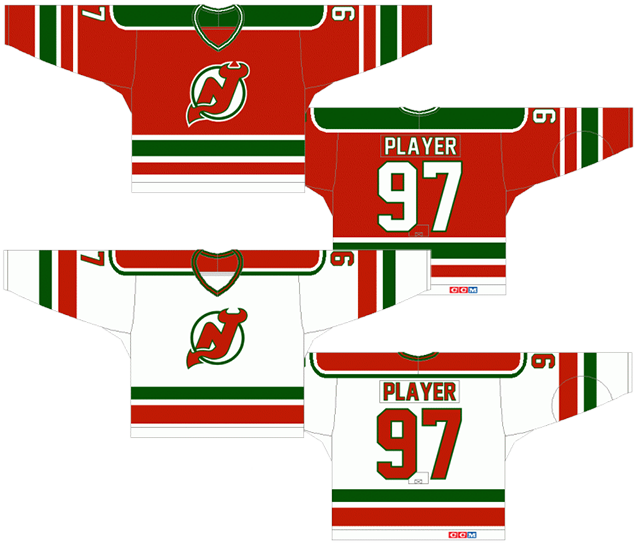 The original Devils jerseys. Not many teams have ever tried the red and green colour scheme (only Minnesota does it today), mostly because it’s the stereotypical Christmas colour combination and it’s difficult to design something that uses those colours and doesn’t automatically make you think of the Grinch, creepy stop-motion animations and Michael Jordan on a model train. Minnesota has mostly succeeded, but this jersey doesn’t really try to avoid it.

That’s not to say that green and red aren’t a good colour combination. In fact, they’re complimentary colours, just like the blue-and-orange of the Oilers and Islanders, and purple-and-yellow (formerly) of the Kings. But using complimentary colours in relatively equal doses, without letting one dominate the other, makes for a very aggressive jersey. And in this case, very Christmas-y as well.

It’s fun, unique and aggressive, but it’s hard to disassociate from the Christmas colours, and I’m not sure where the green comes in when you’re a team called the Devils. Because it’s the Garden State, I guess?

Other than the colours, the striping on the jerseys is interesting, as they’re different between the home and away jerseys…kind of. They’ve both got red and green stripes surrounded by white, but on the red jerseys, that causes extra white stripes to be included, which makes the red jerseys too complex, and the lesser of the set. But the white jerseys add an unnecessary extra stripe to the shoulder yokes, which doesn’t really work either.

It’s a strangely consistent but inconsistent jersey set with some great quirks and unique colours, but it’s just not refined enough to push the jersey into the top spot.

As an aside, I’ve gotta give kudos to Uncle Lou for essentially giving the finger to the League and Reebok by refusing to use the chromed-out logos and slanted-number jersey templates in the 2014 Stadium Series (which were mostly awful), and just bringing these jerseys back instead.

Jersey Recommendation: #9 Muller. The problem with having only two jerseys throughout 35 years of existence is that there’s not enough jerseys to go around to honour all the players. But Muller was the captain of the Devils during these years, and with the team exclusively during this jersey era. Sure, he went on to greater accomplishments elsewhere, but he was the heart and soul of the Devils at one point. Get it in the whites. Other good picks…#3 Daneyko, #15 MacLean, #10 Broten. Get one of those in the reds. 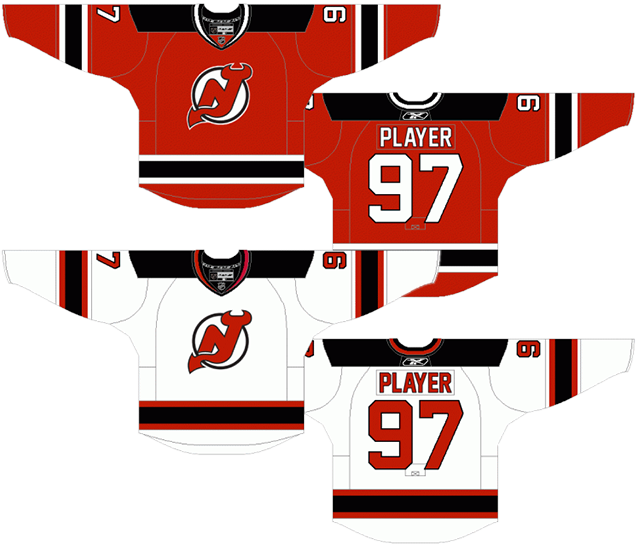 Like a fine wine, the Devils’ jerseys have gotten better with age. With all the Worst to First Jerseys posts we’ve done here on HbD, this is the first one that has been perfectly chronological, with each jersey improving on the next one.

Everything here has been simplified and streamlined to create what is the quintessential hockey jersey. Simple, consistent striping on the sleeves and waist. A solid-coloured shoulder yoke. Both jerseys are identical to each other, with the white and red swapped, and when you’re working with red, white and black, it works really well. And it’s matched perfectly with a simple, iconic logo.

If you’re ever looking to create a beer league hockey jersey and just want something standard to base your design off of, this is probably the best place you could start. Change the colours and logo to whatever you need, and bang, you’ve got a traditional no-nonsense hockey jersey. It’ll look great, and it’ll get the job done.

And it’s been doing its job for almost a quarter century now: simple, straight-forward, standard, no gimmicks, no frills. And that’s also a perfect representation of Lou Lamoriello’s era with the team, which has easily been the team/franchise’s most successful era as well, with Cup wins in 1995, 2000, and 2003.

That could also be a rub against this jersey though. There’s nothing here that pushes it to greatness – no risks taken, nothing innovative – just a simple, classic design that keeps things focused on things other than the jerseys. And it’s the best thing they’ve ever worn.

Will their chronologically-perfect jersey history continue with their rumoured new jerseys next year? We’ll just have to wait and see.

Jersey Recommendation: #30 Brodeur. What can I say that hasn’t been said already. One of the best goalies to ever put on skates. Multiple record holder. The best player to ever put on a Devils jersey. Despite his weird defection to the Blues, he’s still the iconic Devil.