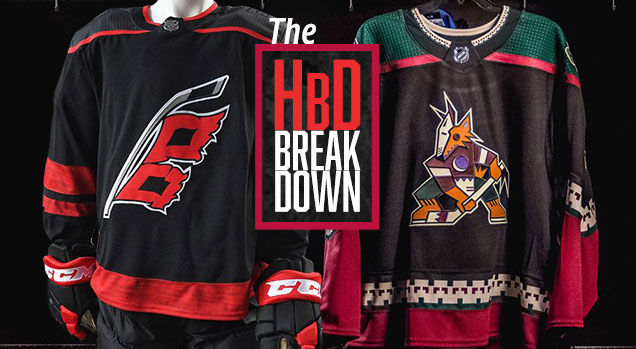 Last week’s Draft Day had the usual: some big trades, some small trades, a whole lot of teenagers who’ve never lived with dial-up internet gracing an NHL stage for the first time, and of course, some new jerseys. We’re here to talk about the last of those events. Duh.

This year, it was Carolina and Arizona who did their unveiling, releasing a jerseys that looks backwards, and another one that looks way backwards. Read more after the jump. 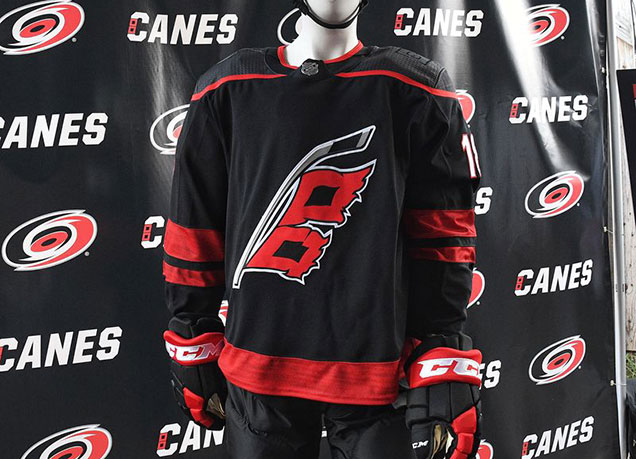 By the luck of the draft lottery, Carolina had the first unveiling of the night, so we’ll start with breaking down a jersey that grabs an alternate logo from their recent past and literally doubles-down on it being the centrepiece of a black jersey. Regular readers will know how I feel about black jerseys (not much), but for Carolina, it makes a certain amount of sense so I can understand it. Plus, that’s the least of this jersey’s problems. Back to that new alt logo… 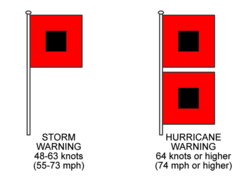 I get it. One flag is just a storm warning, while two flags is an actual hurricane. Logically, it makes total sense. Logistically though, it makes for a spatially awkward logo, being too tall and skinny (the same way that the old Ducks logo was way too short and wide) to look good on a hockey jersey…at least when you’re using the exact same logo concept. I’m all for having a double-flag concept, but it just doesn’t work with this particular concept (a flag(s) on a hockey stick) and it feels a bit lazy to double-down on this concept instead of exploring other concepts that would utilize it better.

Maybe they did explore it, maybe they didn’t. But they rarely publicly disclose their design process, so we’ll probably never know. 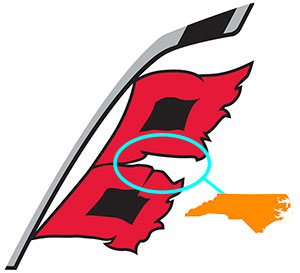 A really great detail of the logo is how they incorporated a map of North Carolina in there. It’s a subtle detail that cleverly uses negative space to give the logo additional meaning and depth. It’s like they took a page out of their own franchise’s history. But, that doesn’t save the inherent problems with the logo.

Nothing Grey Can Stay

The other most obvious element of the new thirds is the use of a grey shoulder yoke. The World Cup’s Team North America, and now the Golden Knights, have made grey a trendiest of (non-)colours to use on a jersey. I don’t mind it here at all, but the decision to have it only on the shoulder yoke is head-scratching. 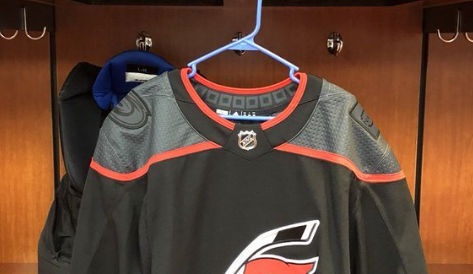 This photo taken in less-forgiving lighting shows how much it stands out on the jersey. Adding another grey stripe to the sleeves/trim would’ve created a more balanced look. You could even add the subtle hurricane symbol pattern that’s on their regular home/away jerseys to have some consistency throughout the jerseys. What would it look like? Oh, look, somebody’s already done it:

A little adjustment to the @NHLCanes jersey. The Warning flag pattern is something I think is a great design element unique to the team. I don’t get why they keep hiding it in the collar. In dark grey on black, it is subtle. Added a grey stripe to the sleeve. What do you think? pic.twitter.com/9H02fCYv6Y

The new version is more visually balanced. It still needs some tweaks, but it’s getting there.

But then why the hell include them in the first place? And your grey shoulder yokes are already distracting, so these patches that look like the flag and logo were washed in the ashes of a campfire just make it all worse. Ugh, so bad.

Birds of a Heather

Again borrowing from the uber-popular Team North America jerseys from the 2016 World Cup, the Hurricanes integrated the same heather pattern into their red striping. 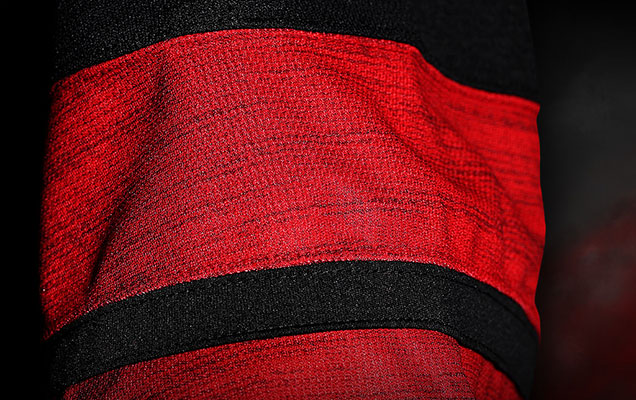 It’s subtle, but it adds a nice texture to the otherwise minimalistic (and infuriatingly inconsistent) approach to the striping on the jersey, so this is definitely something for the plus column. Also, it’s red, so it doesn’t look like duct tape like it did for Team North America. Yeah, those were bad jerseys. Come at me. The Hurricanes used it in a much more successful way.

It’s unbalanced with awkward amounts of negative space, uses a poorly-executed logo, and inexcusably greys out its shoulder patches, for no reason other than that it might look “cool”. And I could see why people could (and will) like this jersey for looking cool. But people also thought this was cool at one point. While there’s a few really great details, it’s a hard pass from me. Over/under is set at 3.5 seasons. 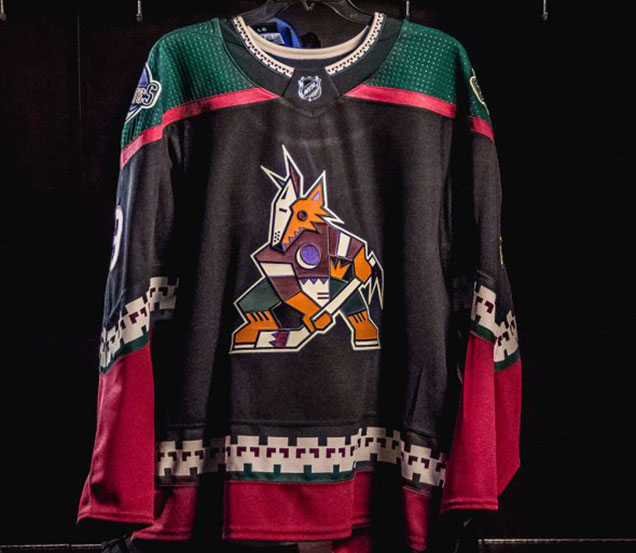 Unpopular opinion time: these are not nice jerseys. Like, at all. Are they unique? Definitely. Are the impactful? Absolutely. Are they aggressive? No question.

But, they’re so firmly entrenched in ’90s design aesthetics (originally worn from 1996–2003) that they’re going to look dated, again. The love for these jerseys is based on nostalgia and irony. And like any relationship that’s far in the past, we tend to remember only the good times. When we hang out with old fling again, the warts and problems just come flooding all back. (But they sure do make for good shirts/posters still! 😀)

Don’t get me wrong, I love the kachina pattern and styling, I love the general aesthetics, and I think we could use more of this in hockey jersey aesthetics, but it would’ve been far more interesting to integrate their new visual branding with their past, to create an homage to their past but keep the conversation moving forward; use a subtler version of these styles to create something that will last and be really interesting. Instead, they bring something back to cash in on nostalgia and it will be dumped again in a few years.

But Tell Me What You Really Think

Everything that I said in the Coyotes’ Worst to First Jerseys post still applies here. These jerseys were originally created during a highly-experimental era in hockey jersey aesthetics, with the emergence of new markets and a new technology for printing on jerseys. Some of this experimentation was on a mad-scientist-blow-up-in-your-face-charring-your-face-leaving-you-googly-eyed-and-unable-to-move level. Some experimented with changing the usually straight lines on the jerseys. Colorado and Dallas added angles. Los Angeles added words. Arizona, like Carolina and Atlanta, added patterns.

For the Coyotes, their logo drew from kachina-inspired aesthetics of the traditional Indigenous societies, and these jerseys became an extension of that aesthetic, creating a relatively complex pattern along the sleeves and bottom of the jersey. Nothing wrong with bringing in Indigenous influences in your design, but the lack of subtlety make these jerseys look like a poncho when being worn.

The problem with the complexity of the patterns here is that it becomes the focal point of the entire jersey, which should instead always be the main crest on the front. The complexity, heavy contrast and multitude of colours draws the eyes away from the logo and to the perimeters of the jersey. Then, it’s the complexity of the logo that brings it back, making your eyes jump around like they have a mind of their own.

The other bad aspect of this era of hockey was the overly complex colour palettes. Florida was guilty of it. Atlanta was guilty of it and so was Arizona, using sand, green, purple, burgundy and brown. None of these colours are common in the NHL (where blue, navy blue and red run rampant), so it’s great they chose unique colours, but why did they need so many of them?

The only change they seemed to make to these new versions is removing “Phoenix” from the shoulder patch, where it just now says “Coyotes”. Otherwise – aside from the new jersey manufacturing techniques – it’s pretty much identical.

Yeah, thought I’m fairly certain I’m in a vast majority, these are not great jerseys. And it’s a lazy cash grab for Arizona and the league when they could’ve tried something new, forward-thinking, and much more interesting. And the love affair with these will again end with a “what the hell was I thinking?” splat…until another 25 years pass.