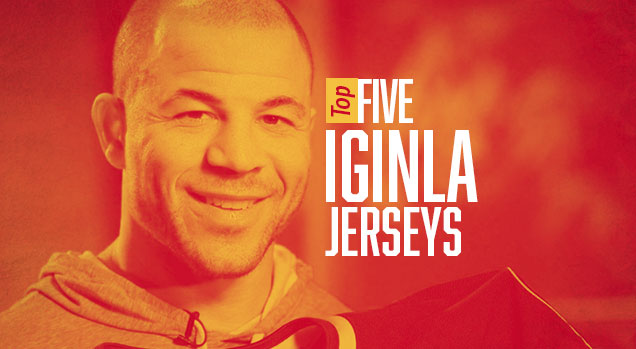 Ed note: Over the summer, we’ll look at the best players that likely have played their last game in the NHL and ranking the Top 5 jersey they’ve worn in their illustrious careers. Today, we continue with Jarome Iginla.

There’s little questions that Jarome Iginla is a legendary hockey player and one of the best and most dominant players of his generation, but at 41 years old and coming off of hip surgery that saw him miss all of the 2017-18 season, it’s safe to assume we won’t see him playing another NHL game, despite his apparent desire to find a way back into the league. It’s always tough to see great players being pushed out of the game they love and excelled at.

And excelled Iginla did, winning the Rocket Richard trophy twice (and the Art Ross once), the Pearson (now Lindsay), King Clancy, and Messier trophies, numerous All-Star nods, as well as leading his team to within millimetres of a Stanley Cup. The best way we know how to honour him is by giving him his own dedicated Top 5 list. Here’s the best jerseys that Iginla have ever worn… 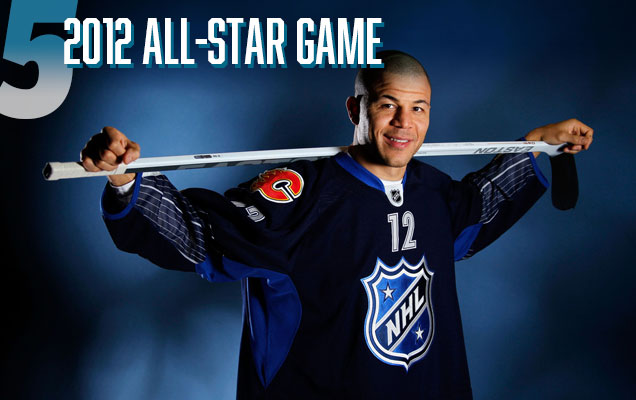 Iginla has been in six All Star Games through his career, and while there were some seriously awful jerseys he had to don for them, his last one in 2012 was easily the best jersey he wore in any of them, and it was his most successful on-the-ice as well, scoring a goal and two assists. But these are pretty good jerseys just in their own right, with the two tones of blue to go along with more contemporary and experimental elements, like the starburst line patterns on the sleeves, backs, and numbers of the jerseys to create a minimalist but still interesting jersey. The stars along the bottom of the jerseys are an elegant addition as well. The numbers on the front? Bleah. And the big complaint is respects to Iginla’s jersey is the bright red and gold Flames logo on the shoulder that doesn’t fit at all. But then again, he’d be pretty used to shoulder patches that didn’t match his jersey. 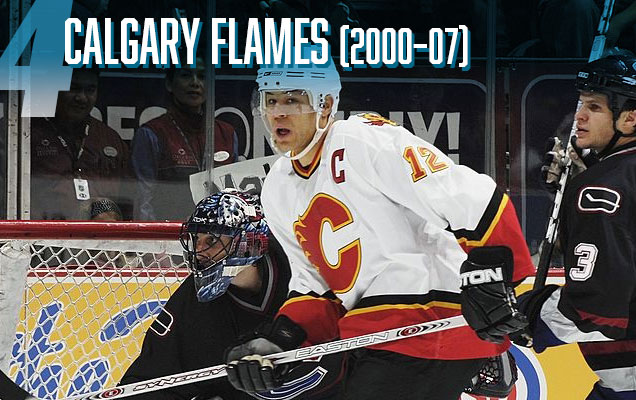 Speaking of Calgary – a team which have never exactly boasted a great library of hockey jerseys – it would be a very good Iginla list without including a Flames jersey considering he played 17 seasons with the team, serving as their captain for a decade and holding the team records for most points and goals. He got them to within a single win of the ultimate goal in 2004, scoring 22 points in 26 games that postseason. And the 2000–07 jerseys are the best the Flames have ever worn (and thus, the best that Iginla has worn with the Flames). It’s a clean, classic design and, aside from the 1980–94 jerseys (and recent third jersey), the most minimal jersey they’ve had. The piping is a little unorthodox, but it adds some contemporary elements to the jersey and is minimal enough to not be overdone like some of the other Flames’ jerseys. The red jerseys in this set look great too, as it uses the black C which makes the logo stand out a lot more and gives the jersey a more aggressive tone to it. 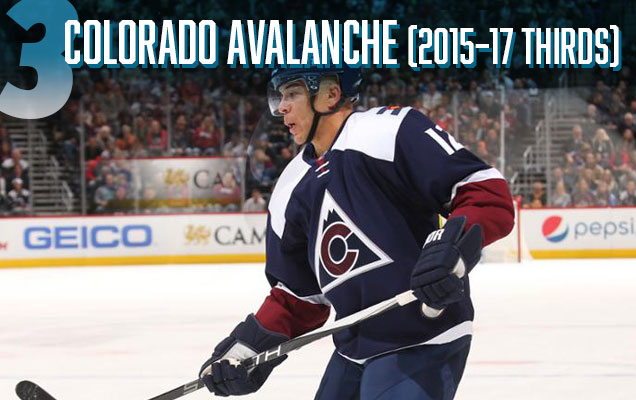 Since leaving the Flames in 2013 for Pittsburgh, Iginla has wandered around the league somewhat, but his most longest stop was easily Colorado, playing most of three seasons in Denver and posting 29- and 22-goal campaigns while there. The Avs regular jersey set from 2014–17 featured the much reviled Reebok pipes on the front of the jersey, their third jerseys from 2015–17 were much better, featuring an homage to the classic Colorado Rockies logo from the ’70s (and a huge improvement over their current logo I would add). While there are some minor issues with them (would’ve liked to see the Avalanche blue instead of the navy blue, for example), the design is a great mix of modern and vintage: it’s drawing from the teams’ history, the specific location of the team, and brings in some modern (and minimalist) touches that creates something unique. I’m officially a fan. 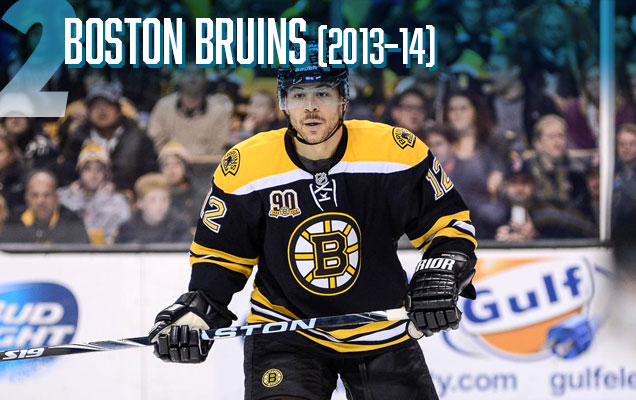 Although Iginla only played one season in Beantown (in which he impressively scored 30 goals and 61 points…not bad for a 36 year old), these jerseys are just so great and iconic that it’s hard not to have them on this list, or even near the top of this list. The balance between the white, gold and black on these jerseys make them bright, intense, and aggressive all at the same time. While it’s not a contemporary look at all, it’s so classic, and so entrenched within the Bruins organization that a departure from this look would be unthinkable. Although, they did think about it once…*shudder*. It’s just too great of a jersey to not be included. Aside: this is just a friendly reminder that that’s not the only black jersey that Iginla wore (whoa, that’s weird, man).

Iginla played often for his country, and while he never quite reached the mountain-top in the NHL, he was a constant champion for Canada. In the six times he wore the Canadian jersey, he won gold five times, including at the World Junior Championships, the World Championships, the World Cup of Hockey, and of course, at the Olympics. And those 2010 Vancouver Olympics jerseys that Canada wore were the cream of the crop. The details in the maple leaf crest are subtle and exquisite. The rest of the jersey compliments this subtle complexity with elegant simplicity. The simple two thin stripes on the sleeves and the bottom of the jersey are simple and classic. The red and white are so well balanced that you barely notice there’s no black on it at all (unusual for a Canadian jersey these days). It’s such a great combination of classic, elegant jersey design with some really intricate and interesting modern touches, it creates a jersey that looks great at a distance, and even better close-up. It’s safe to say that it’s the best – and most memorable – jersey that Iginla has worn. Don’t forget who got the primary assist on Crosby’s Golden Goal after all.