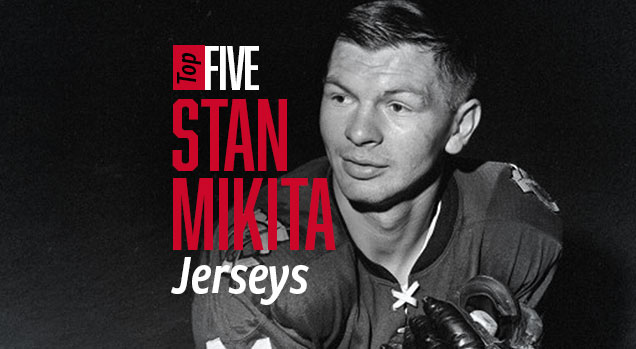 Just recently, the hockey world lost a legend in the form of Stan Mikita, a Slovak-Canadian who played his entire 20+ year career with the Chicago Blackhawks, and was one of the best players of his era. Before Chicago had today’s duo, it was Mikita-Hull who led the team to a Stanley Cup victory in 1961.

But Mikita was also an innovator, being the first player in the league to use a curved stick, as well as being one of the first players to wear a helmet, after a part of his ear was torn off by a errant puck. He also became one of the league’s most gentlemanly players, winning multiple Lady Byng trophies after he decided to play a cleaner game, going from 154 PIMs in 1964–65 to just 12 PIMs in 1966–67. Add in a couple Hart Trophies, four Art Ross Trophies, multiple All-Star appearances, and you’ve got one of the best players to ever lace up the skates.

How do you honour a legend like Mikita? There’s many ways, and here at HbD, there’s only one way that we know how. We’ll showcase the 5 best jerseys that were worn by one of the best to ever play the sport. 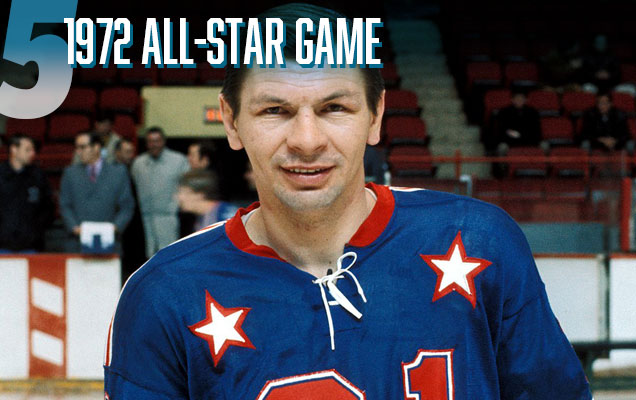 Selecting the best five jerseys that Mikita wore during his pro career was tough…because there’s so few of them. He played his whole career with one team that hasn’t changed their jersey in over 60 years. So, we’re diving in the All-Star Game jerseys her wore, with this one from 1972. (Get a better look at it here.) The jersey is a great blending of (for the time) historical and modern aesthetics, mixing more non-traditional striping patterns and unconventional elements (the shoulder stars) with an otherwise simple and traditional layout. These blue jerseys were only introduced in 1969 when the ASG format was changed from an all-star team pitted against the previous season’s Stanley Cup champs to two teams of All-Stars pitted against each other. I’m not crazy about the numbers on the front, but part of me likes that better than the slapping the NHL logo on the front. 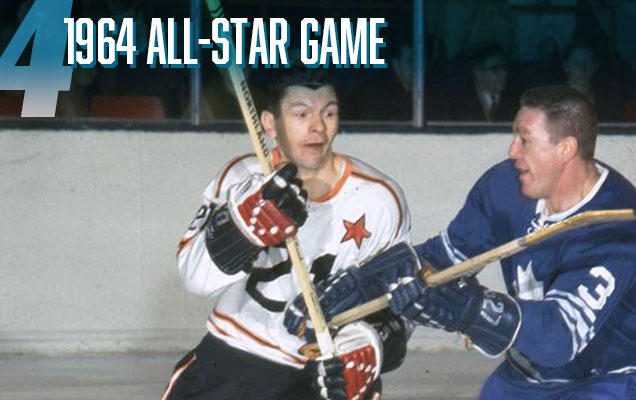 Altogether, Mikita played in nine All Star Games during his career, scoring 2 goals and 4 assists in games that didn’t feature today’s high-scoring results (1967’s ASG was a 3-0 shutout). 1964 was the first one he played in, a game against the Maple Leafs (the 1963 Cup champs), and he wore the white counterparts to the blue jerseys featured above from 1969 onwards. Like those, these jerseys also feature a great blending of historical and modern aesthetics, drawing inspiration from the jerseys worn at the 1939 Babe Siebert Memorial Game (which was basically an All-Star Game, with an all-star team playing against the Montreal Canadiens) and using more traditional striping patterns than the versions worn from 1960–63. Still got the numbers on the front though. Of note, Mikita was also on the NHL’s First All-Star Team six times, and the Second All-Star Team twice. 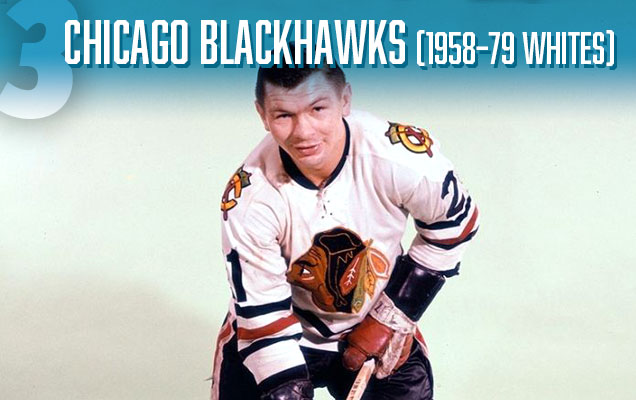 If there’s a candidate for Mr Blackhawk, it should be Stan Mikita. Of all the greats that have played for the team, Mikita is one of the few that played his entire career for them, and certainly none of them achieved the same accolades that Mikita has: Cup champion, Hart, Art Ross, and Lady Byng trophies, etc. He played over 1500 games in a Blackhawks sweater, scoring 600 goals and over 1600 points, presumably about 50% of all those in these third-ranked white Blackhawks jerseys (or Black Hawks, as they were officially known as during his era on the team). While I consider them to be inferior to their counterparts – and generally overrated as a white jersey because they’re predominantly monochromatic – there’s no questioning their legacy and longevity, with the same concept being worn since 1955 and having lifted multiple Stanley Cups. The simple yet complex tri-striping in combination with unique and iconic shoulder patches on an otherwise minimalist design makes for a great, classic jersey.

As far as I can find, Mikita received the honour of suiting up for his country just once, for the famous 1972 Summit Series against the Soviet Union. If you’re only going to do it once, he chose one of the most iconic hockey series of all time wearing what is arguably the best jerseys that a Team Canada has ever worn in any competition. He was limited to just the first two games in the series due to injuries, scoring an assist in Canada’s Game Two 4-1 win in Toronto. But these jerseys! They eschewed any traditional hockey jersey striping or elements in favour a large maple-leaf-ish design dominating the entire front of the jersey…and that’s it. It was innovative, unique, bold, and it looked beautiful on the ice. Another nice touch was that all the nameplates on the back just said “Canada”. It helps that it was worn during what is probably the most iconic image in Canadian hockey history. 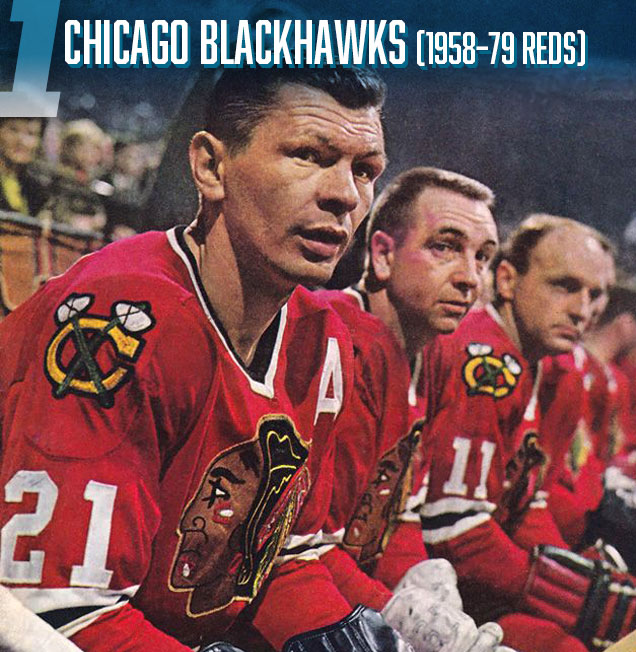 Was there any doubt? Mr Blackhawk, in a Blackhawks jersey that many consider the absolute pinnacle of hockey jerseys in the century-plus history of the game. On top of all the many accolades and accomplishments we’ve discussed earlier here, Mikita retired holding the third highest point total in the entire NHL, trailing only Gordie Howe and Phil Esposito at the time. He was named one of the 100 Greatest Hockey Players by the NHL in 2017, is the best centreman of his era (if not of all-time), an innovator who transformed hockey, and a gentleman to boot. This placement was an easy decision.

The hockey world lost a legend today, someone who made every jersey look better because he was in them. RIP Mr Blackhawk.