Since 1998, the NHL and its partners have dedicated themselves to the Hockey Fights Cancer program, a fundraising campaign supporting American and Canadian cancer charities. Since its inception more than 15 years ago, the effort has raised over $12 million for children’s hospitals, cancer research, as well as various local cancer organizations.

As any casual fan probably knows, the hockey community is known for its humanitarian efforts, from Movember and the annual playoff beard-a-thon (I’m sensing a pattern here with the facial hair…) to military appreciation and Autism awareness nights. Through the months of October and November, each team has a dedicated Hockey Fights Cancer night to raise awareness and funds for those affected by the disease. Along with these special nights comes an opportunity for individual players to show their support. Masks have always served as a unique way for goaltenders to show their support for charitable efforts, and Hockey Fights Cancer is no different.

Check out some of the masks below that goaltenders will be wearing to show their support, and to donate to this important cause, visit the Hockey Fights Cancer section of NHL.com. 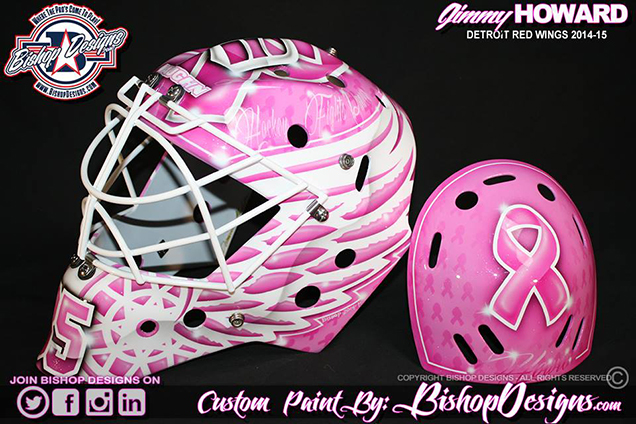 Howie’s no stranger to rocking Hockey Fights Cancer gear, having worn his fair share of pink masks, and even pink pads to show his support for the cause. This year on the Red Wings’ Hockey Fights Cancer night, he sported an all-out pink bucket, airbrushed by Ray Bishop, with “Hockey Fights Cancer” once again painted in script across each side. The Detroit netminder even went a step further earlier this season, surprising a Red Wings fan and breast cancer survivor (who also happens to be a huge fan of Howard) on her tour of Joe Louis Arena. As always, the Red Wings will be auctioning off game-used gear (presumably including Howie’s mask) for charity when the 2014 campaign comes to a close.

In addition to the purple warm up jerseys that the Caps will wear for their Hockey Fights Cancer night, both Washington goalies will be wearing lavender masks in support of fighting all forms of the disease. Starter Braden Holtby’s (right) is an almost identical design to his regular season mask, as is Peters’ (left), both painted by Swedish artist Dave Gunnarsson. These are both nice adaptations in keeping the goaltenders’ signature looks and team branding while also incorporating the logos and colors of this special fundraising campaign.

Hockey Fights Cancer isn’t the only charitable campaign to inspire new mask designs in the NHL. Here are just a few other other goaltenders who showed their support for important causes with their buckets.