The charity-crazed and mustache-filled month of Movember may have come to a close, but that hasn’t stopped Oilers goaltender Ben Scrivens from doing some good on and off the ice.

The Cornell graduate, who has expressed a special interest in psychology, wanted to use his voice to help spread awareness about the trials of living with mental illness beyond the stereotypes seen in pop culture. “You go to the doctor and take an X-ray of your arm and they can see your arm is broken and have a remedy to fix it,” Scrivens said in an interview with NHL.com. “But with mental illness it is not as cut and dry as that… It’s a field that needs more discovery, more work and a lot more awareness around it.”

Having learned about many artists suffering from mental illness during his time at Cornell, Scrivens saw a perfect opportunity to spread awareness through a combination of hockey and art. “The characteristics they run with are quite compartmentalized and detail driven and I thought it was something that could transition really well to a goalie mask,” he said. “It was only later I thought it would be a good idea to use my mask to accentuate how talented these artists are and use it for a good cause at the same time.”

Scrivens started the Ben’s Netminders program, both providing local youth affected by mental illness with special experiences at Oilers’ games and working with Edmonton-area artists suffering from mental illnesses to design a series of masks that will be auctioned off for charity at the end of the season.

The first of Ben’s charity masks, which debuted back on October 10th, was designed by Richard Boulet, an artist living with schizophrenia, and airbrushed by Scrivens’ regular artist, Steve Nash at Eyecandyair.

The mask features the words “empathy” and hope” around the border, as well as the phrase “I’ll walk a mile in your shoes if you show me how.” Ben hopes the message, Boulet’s way of visualizing his recovery, will translate and hold meaning for everyone. “Empathy goes a long way in all walks of life, whether it’s family or friends, on Twitter or dealing with people who are sick.”

For the second in Ben’s series of masks, the netminder collaborated with Edmonton artist Marc Munan to create an incredibly detailed and stylized cityscape in vibrant colors, including the Oilers’ blue and orange.

Under the top of the cage in blue and orange blocks sits the word “community,” Munan’s overarching theme for the design. As Scrivens explained on Oilers Today, “everybody in the community benefits and is healthier when we act as one and look out for each other.” Scrivens hopes this program will shine some light on the challenges these artists and others suffering from similar illnesses face and start conversation about how to cope with these kind of diseases.

The first and most crucial element was getting people to talk about mental illness. Not just specifically schizophrenia, any mental illness… the more we talk, the better off we all are within the community. 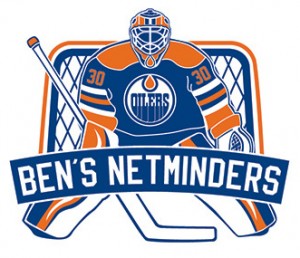 On this initiative as a whole, Scrivens discussed the role sports can play in helping people cope in difficult situations. “Pro sports can be a good barometer for society as a whole to see how we deal with and accept and treat people in different situations than what we are going through. People tend to view athletes as not being real people. They are impervious to pain and they don’t have the same problems that ‘normal’ people do. But when something hits home and you see someone you watch on TV going through something that’s troubling and you as a person can resonate with that, it kind of puts it into perspective that these problems don’t look at race and they don’t look at gender and they don’t look at all these other discrepancies. They affect everybody equally. Whether you are hockey player or a fan, mental illness will affect you or someone you know.” (Logo: oilers.nhl.com)

For more information on Ben’s Netminders and Scrivens’ series of masks, visit the Oilers Community Foundation website and follow @ben_scrivens on twitter for updates on the upcoming auctions and more.