The Bucket Bracket Showdown (Round 3)

Well, we’re down to the final four. While the best designs didn’t win out in every matchup so far this postseason, each of the last masks standing make for some tough competition. We’ve already broken down the conference quarter-final and semi-final matchups, so now let’s take a look at who would advance to the Stanley Cup Final in the battle of bucket design. 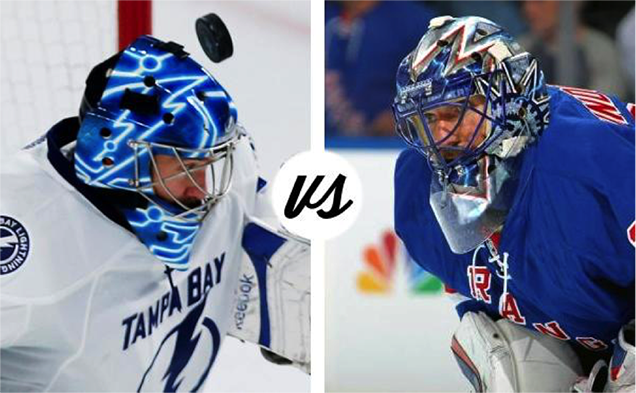 Between two masks that also advanced in our conference semi-final picks, it’s a battle of Dave Gunnarsson masterpieces with Bishop’s electric design and Hank’s metallic shine. Having been painted by the same artist, these masks are similar in both being dynamic, eye-catching and innovative in their design approach. Inspired by the movie TRON Legacy, Bishop’s bucket has made headlines this season for its new G.L.O.W. Tech FX paint job, one of the first masks Gunnarsson used his new glow-in-the-dark paint on. The effect adds an element of surprise to the high-tech, lightning design, which naturally lends itself to the glowing effect.

Lundqvist’s on the other hand draws from a more classic inspiration, and nothing is more classic New York than the Statue of Liberty. King Henrik has consistently given a nod to his home country of Sweden through incorporating crowns, or “krona”, somewhere in his mask, this time mimicking the angular design of Lady Liberty’s own crown and creating an overlapping starburst effect.

Overall, this was a tough matchup. Both of these masks are compositionally simple yet boast dynamic lines and crisp paint jobs, but the hidden glow-in-the-dark touch on Bishop’s earns him the slight edge, making his mask just a little bit more special. 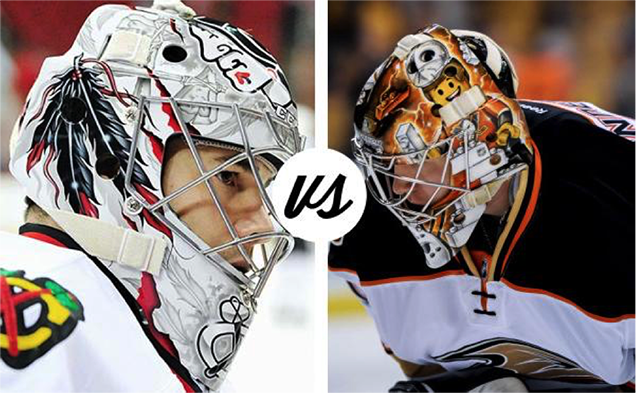 While Corey Crawford’s on-ice performance was shaky through round one, ultimately getting him benched in favor of Scott Darling, his subtle, monochromatic mask has been riding high through this postseason. His opponent’s mask, Andersen’s lego man, has had a challenging road, squeaking past fierce competition in Pavelec and Hiller, but he battles to face off with Crow and his feathered mask for a bid to the 2015 Cup finals.

These masks, while both strong in detail and similar in composition, couldn’t be more different in style. Painted by Quebec-based artist Stephane Bergeron at Griffe Originale, Crawford’s mask is all about the details. Sticking with an almost entirely desaturated palette, Bergeron allows the Blackhawks logos and feathers to take center stage, using soft brush strokes to create a wallpaper-like backdrop for the bold graphics in the foreground. While the paint job and attention to detail in this mask are undoubtedly beautiful, the lack of contrast with the ice and Chicago’s road whites can appear washed out.

Andersen’s mask on the other hand is anything but subtle. Artist Dave Gunnarsson uses his signature style to create an exciting, dynamic design that’s full of color and playful imagery. The lego man mask has received praise in the press all season long (why reinvent the wheel? You can see it for yourself on Puck Daddy, CBS and InGoal Magazine) and with good reason. The brick wall concept is a bit cliche, but the lego interpretation is new and all Andersen’s own, giving him the push he needs to beat out Crawford to advance to the Stanley Cup finals.

Agree? Disagree? Let us know who you would pick in the comments below, or on Twitter or Facebook! And remember to check back in a couple weeks for the Stanley Cup Finals!

2 Responses to “The Bucket Bracket Showdown (Round 3)”