Greg Wyshynski of Puck Daddy just posted an article about a leaked new jersey that Team Canada will be wearing for the 2011 World Junior Championships this coming December: 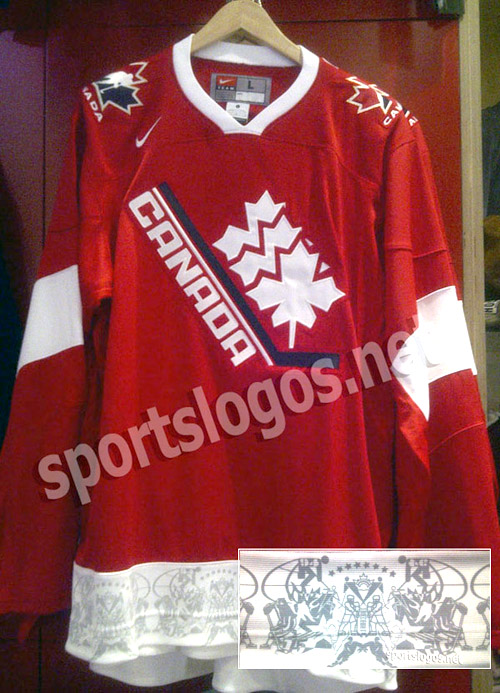 While I appreciate the throwback look, and don’t find anything offensive about the jersey in general (sometimes, kitsch works really nicely but only when it’s not actually being substituted permanently for their current logo), that faded pattern on the skirting is something atrocious. It’s certainly not the first time strong elements have been added to the skirting of hockey jerseys (like the old (and horrible) Czech Republic jerseys, or the Latvians jerseys) but it’s rarely a pretty thing.

My problem with it in this case is that there’s not really a purpose to it. The natural folds and curves that will happen when the jersey is placed on any human body will make the design in the skirting like a dirty mess and not be representative of anything. Even looking at the image above, it’s hard to decipher exactly what all the elements are. Pretty poorly executed. This is a good example of bad kitsch.

Did I mention that having the pattern there actually makes the skirting of the jersey seem a little bit like, well, a skirt?

As Wyshynski points out, it’s probably stemming from the Canadian jerseys from the 2010 Olympics in Vancouver, which featured a similar faded-out complex design in the middle of the maple leaf. However, that one I’m more of a fan of, as the rest of the jersey is extremely minimal and the eye is naturally drawn to the maple leaf in the middle of the jersey anyway, so it’s not creating any competition on the jersey for the eye to focus on. And it’s more subdued, so even less distracting.

In short, don’t like it. What do you think? Love it? Hate it?