With the 2015 Winter Classic behind us, the focus of the league’s attention has shifted to the outdoor matchup between San Jose and Los Angeles in Santa Clara, California. There will surely be no shortage of drama in this contest coming off last year’s playoffs, when the Kings became just the fourth team in NHL history to reverse-sweep a series, but even more tragic than the Sharks’ blown 3-game lead are the, um…innovative…color-blocked jerseys LA and San Jose will be sporting at Levi’s Stadium.

Fortunately, there is some salvation for the aesthetics of this game. Here are the stunner masks probable starters Jonathan Quick and Antti Niemi will be wearing outdoors on February 21st.

With 2 Stanley Cups and a Conn Smythe trophy under his belt in the past 3 years, Kings star netminder Jonathan Quick has good reason to stick with whatever it is he’s been doing. Known to be a bit superstitious (like having a teammate sit on his glove while getting dressed for a game…don’t ask) and stick to his regular routine, it’s no surprise that Quick has made but minor modifications to his mask design over the past few years. Airbrushed by Steve Nash at Eyecandyair, the “battle armour” design gets a slight color tweak for the Stadium Series game, opting for a crisp, white behind the metallic silver to coordinate with those less-than-fortunate white and gray uniforms.

This concept has continued to work for Quick time and time again, and with the white background, the clean lines of the armour design pop more than in his traditional all-gray look. Despite Reebok’s misstep with the final outcome of the uniforms, they used the seemingly same design approach as Nash in revamping Quick’s mask for the outdoor setting:

While grounded in traditional hockey uniform design motifs, the 2015 Stadium Series uniforms re-interpret these elements in a more streamlined and amplified way… Designers then explored how to take this core set of motifs and turn up the visual volume on them. One question repeated throughout the process was “If you can’t see it from 200 yards away, does it need to be there?”

The added contrast and enlarged “LA” logo on the backplate accomplish the same design goals that Reebok was aiming for with the paired-down jerseys and super jumbo numbers to adapt for the larger venue.

Another new addition to this iteration of the battle armour design is the white laquer on the front of the cage. Lacquered or colored cages often add another interesting dimension to a design, but the two-tone cage is freshly unique and immediately caught my attention. Aside from just being an interesting design element, the white striping down the middle of the cage creates yet another parallel to the colorblocking in the jerseys – a nice consideration.

Overall, there’s not much more to say about this mask that hasn’t already been said. Read our thoughts on Quick’s regular season battle armour mask in the preseason mask roundup and check out Eyecandyair’s Instagram page for process shots and more views of Quick’s new bucket. 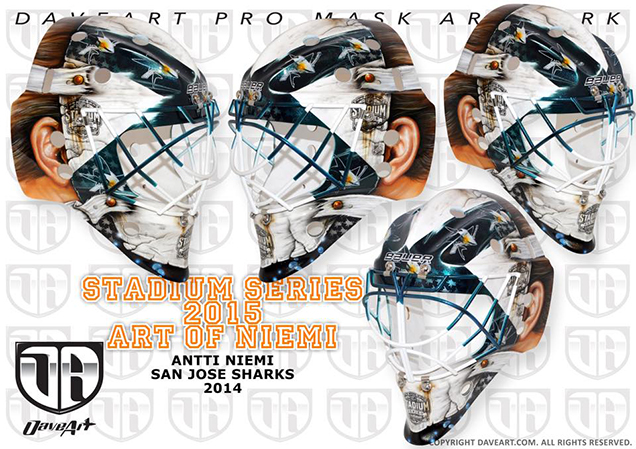 One of the main objectives and biggest draws of the NHL’s outdoor games is bringing hockey back to its roots. We’ve seen a few great throwback jerseys in outdoor contests, but channeling the past has been a common theme with the aesthetics in many of these games.

Antti Niemi and artist – to seemingly everyone – Dave Gunnarsson did just that in conceptualizing a mask for the Sharks’ netminder. Nemo wanted to model the design after that of his old goalie coach as a tribute and create the illusion of a retro facemask, not unlike the bucket his opponent Jonathan Quick donned for the Kings’ 40th anniversary celebration.

“It is the same paint job as Antti’s goalie coach… Now we just twisted it into a Sharks design,” Gunnarsson explained on his Facebook page. “I created the mask so looks really old and used some puck mark here and there.”

Gunnarsson is known for his detail work, and there’s no shortage of that in this mask, from the hyper-realistic hair and ears to the massive number of mini-Sharks and Stadium Series logos dispersed throughout the design. While ears on a goalie mask always look a little funny to me, what makes this design so smart and successful is how all those tiny details work together to create a larger, simplistic picture. The textures and detail work, even the two-tone paint on the cage, create a teal “X” that spans the entirety of the mask. This design is brilliant in that it’ll read from a distance – a primary concern playing in such a large venue – but has enough texture, visual interest and historic references to be unique yet meaningful.

Agree? Disagree? What’s your thoughts on these Stadium Series buckets? Share it with us in the comments below.