NHL Playoffs 2015 (Round 3) Countdown and Predictions

Time for Round 3. How’d it go in Round 2? So-so. Average. Mediocre. How else could you describe exactly 50%? Combined with Round 1, better branding is still winning, going 7-for-12, so I’ll look at Round 2’s half-win and a glass half full. Let’s keep going with the Conference Finals.

And on top of that, the match-ups are going to be ranked according to which will be the best to watch from an aesthetic standpoint. Some jerseys work better together than others, and you’ll see why. 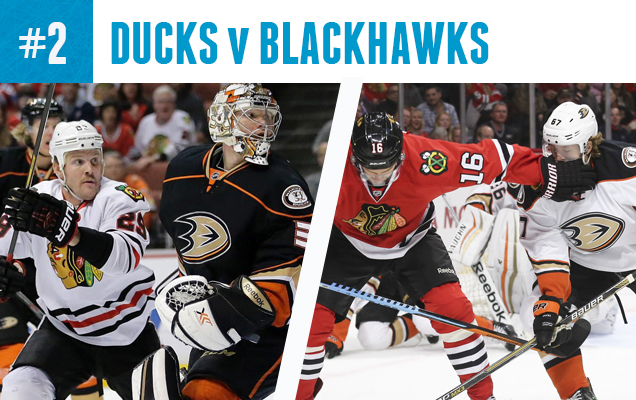 The Hot Bowl! Except for the small amount of green in the Blackhawks’ logos, every colour in this match-up falls on the warm side of the colour spectrum: red, orange, beige, yellow, brown. And while I like that idea, and the match-up should be extremely entertaining, this uniform match-up still falls behind the other one. The Blackhawks are holding up their side of the bargain with one of the best uniform sets in the league, but between the Ducks’ black homes and their super-stripey hot mess of a uniform set, it just compete in the two Conference Final uniform match-ups.

Well, the Ducks were ranked 30th overall, dead last, for their logo originally, but since then, they’ve improved it simply by changing it only to the webbed-D, which makes a lot more sense in terms of how it looks and fits on a jersey. But, it’s still not a great logo, and they also have an inexcusable past, from corporate schlepping for a bad Disney franchise and what could be the most horrendous professional hockey jersey to be worn during a game. Things haven’t improved that much though, with a truly horrible Stadium Series jersey and an overly-striped and complex home and road jersey. And orange and beige together? Caman! The whole visual brand could use a re-thinking.

Meanwhile, the Blackhawks’ logo ranks at #7 in the league, which is very decent, but they also have one of the absolute best jerseys in the league, both home and away. They have history (as the logo hasn’t changed at all since 1964, and the same concept since their inception in 1926), the Madhouse on Madison, a passionate fanbase, overall high-quality design, and a good Winter Classic jersey addition (although their recent one was a disappointment). They had a tough go of it through the ’90s and early ’00s, with bad ownership and lack of a on-ice quality product, but they’ve turned that all around on the backs of Toews and Kane, and from a branding perspective, they’re a beast. They’ve been consistent, and consistently excellent. 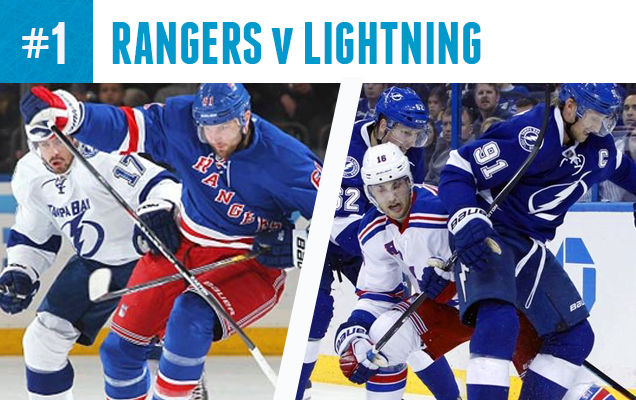 The Cold Bowl! Aside from the Rangers’ red pants and other uniform accents, this match-up is completely blue. That might make for a bit of a boring match-up in someways, but both of these uniforms sets are excellent. The Rangers’ are among the most iconic in the league, while the Bolts’ modern and minimalist look is solid. These still aren’t the best uniform match-ups we’ve seen in these playoffs this year, but the Cold Bowl is definitely the better one in this round.

The Rangers were ranked as having the 12th best logo in the league, and they have a history of using the same, solid logo concept since the 1920s and nobody in the league (save the Canadiens) can match the uniqueness and iconic nature of the Rangers’ home jerseys that have stood the test of time. Often imitated, never duplicated. Their alternate logo is just okay, but not enough to take away from the brand overall, and their jersey for the 2012 Winter Classic more than compensates. Although the Rangers haven’t enjoyed the legacy and history of on-ice success that most of the Original Six teams have had, the Blueshirts are not a brand to be messed with.

Meanwhile, Tampa Bay may have righted their branding ship recently, but it’s still not completely steady, particularly the overly-simplified and corporate-looking logo. And those new third jerseys are pretty inexcusable considering the superiority of their regular jerseys, and their previous third jerseys aren’t much better. And if we start diving back too far into the past, hoo boy. And their past logos have offered some pretty horrendous and illegible typography. Sure, they’ve had some on-ice success, and for a southern-US team, they’ve have a tremendous fanbase and community support, but it’s hard to compete with the Blueshirts.