NHL Playoffs 2015 (Round 2) Countdown and Predictions

Time for Round 2. How’d it go in Round 1? Branding definitely won more than it lost, going 5-for-8, including getting three of the series perfect (Washington, Calgary and Chicago) with the correct amount of games as well. We’re off to a relatively solid start.

And on top of that, the match-ups are going to be ranked according to which will be the best to watch from an aesthetic standpoint. Some jerseys work better together than others, and you’ll see why. 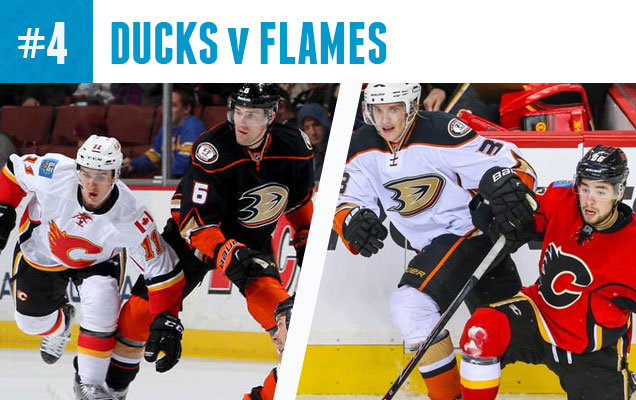 The Superfluously Striped-Jersey Bowl! Both of these teams feature jerseys that have an excessive amount of stripes on their jerseys, especially on the sides. Neither jersey is among the very good ones in the league, which doesn’t make this the best match-up to look at. It doesn’t help that both teams are just the same tone: red/orange. When the only break for the same tone is beige (in the Ducks’ logo), you know you’ve got a problem. And then there’s the Ducks’ black jerseys, which doesn’t make for very exciting aesthetics on the blank white canvas of a sheet of ice.

Well, the Ducks were ranked 30th overall, dead last, for their logo originally, but since then, they’ve improved it simply by changing it only to the webbed-D, which makes a lot more sense in terms of how it looks and fits on a jersey. But, it’s still not a great logo, and they also have an inexcusable past, from corporate schlepping for a bad Disney franchise and what could be the most horrendous professional hockey jersey to be worn during a game. Things haven’t improved that much though, with a truly horrible Stadium Series jersey and an overly-striped and complex home and road jersey. And orange and beige together? Caman! The whole visual brand could use a re-thinking.

As for the Flames, their logo is ranked almost much higher than Anaheim’s, and they’ve been incredibly consistent, using the same logo and colour scheme since moving from Atlanta in 1980. That said, their current jerseys are a bit of a mess, with inconsistent and overly complex striping everywhere, and they’ve had some pretty bad jersey designs and alternative logos in the past, as well as a mediocre current third jersey. But again, the branding – even with all the changes and tweaks – has been incredibly consistent, which only helps a brand that has a good foundation to start with. Oh, and I love those Heritage Classic jerseys too. 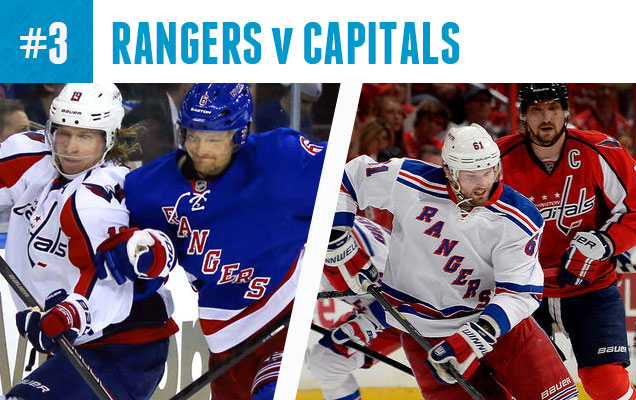 The ‘Merica Bowl! Red, white and blue everywhere! There’s been a lot of classic red versus blue match-ups so far in this year’s playoffs, and here’s another one. What I would love to see in this series is to have both the Rangers and Capitals use their home jerseys, so it would be a true red versus blue match-up (like the 2014 Winter Classic), but that’s not going to happen because…well…not sure why. THIS CAN HAPPEN PEOPLE! JUST DO IT! But both these jerseys are heavy in both red and blue striping, which will play nicely off of each other. It’ll be fun to watch, both aesthetically and in quality of play.

The Rangers, on the other hand, were ranked as having the 12th best logo in the league. The Rangers have a history of a solid logo concept since the 1920s and nobody in the league save the Canadiens can match the uniqueness and iconic nature of the Rangers’ home jerseys that have stood the test of time. Often imitated, never duplicated. Their alternate logo is just okay, but not enough to take away from the brand overall, and their jersey for the 2012 Winter Classic more than compensates. Although the Rangers haven’t enjoyed the legacy and history of on-ice success that most of the Original Six teams have had, the Blueshirts are not a brand to be messed with.

The Caps have never had what could be considered a great logo, and they were ranked #24 in the league. It’s a typographical oddity now, and it was the same with the original it’s based on. The logos in-between weren’t much better. Their current jerseys are the best they’ve ever had, but that bar isn’t necessarily set very high either. Where they got tons of points though, is with the Weagle, their alternative logo – a classy and well-executed design – and their 2015 Winter Classic jersey. That thing is just stunning, works on so many levels and worth drooling all over.

The Christmas Bowl! The playoffs are pretty much Christmas-time for any hockey fan, but this is taking it pretty literally, with this series featuring only red and green jerseys. That being said, these are some of the nicest jerseys sets in the league, with the iconic Blackhawks jerseys and the clean, modern Wild jerseys. The better games to watch will be the ones in Chicago, since the Wild’s whites have a healthy dose of green on them to make things aesthetically interesting. But, I’d love it more if they would just wear their coloured-jerseys all series long. They can do this. Let’s start harassing the league to start doing this in the future.

The Blackhawks’ logo ranks at #7 in the league, which is very decent, but they also have one of the absolute best jerseys in the league, both home and away. They have history (as the logo hasn’t changed at all since 1964, and the same concept since their inception in 1926), the Madhouse on Madison, a passionate fanbase, overall high-quality design, and a good Winter Classic jersey addition (although their recent one was a disappointment). They had a tough go of it through the ’90s and early ’00s, with bad ownership and lack of a on-ice quality product, but they’ve turned that all around on the backs of Toews and Kane, and from a branding perspective, they’re a beast. They’ve been consistent, and consistently excellent.

As for Minnesota, they have what’s the best logo out of all the expansion teams and logo redesigns that emerged during the ’90s, but that’s not setting the bar very high and only gets you ranked at #16. But, they have maintained a very consistent brand, with no logo changes and very minimal jersey changes since their inception, as well as introducing some pretty sweet third jerseys. I’m not crazy about the Christmas-themed jerseys, and they’re moving away from being branded as the mind-numbingly boring team from the Lemaire years. And they have awesome new road jerseys, the best thing to come out of hockey design in 2013. But they’re facing a beast. 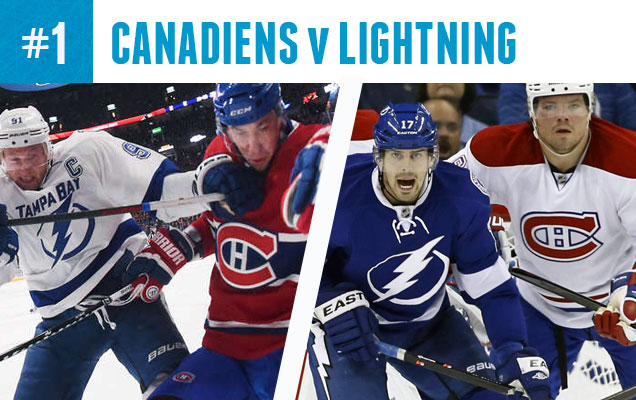 The Beauty Bowl! The Lightning once again take the top spot, moving from the simplistic elegance of the Red Wings’ jerseys to the iconic Canadiens’ jerseys in their match-up, and it stays red versus blue, albeit with the Habs throwing a bit of blue into the mix as well. But really, these are two really clean, simple, strong uniforms competing, so it shouldn’t be a huge surprise that it ends up in top spot. And once again, both teams should just wear their home jerseys all series long. It would be fantastic.

Tampa Bay may have righted their branding ship recently, but it’s still not completely steady, particularly the overly-simplified and corporate-looking logo. And those new third jerseys are pretty inexcusable considering the superiority of their regular jerseys, and their previous third jerseys aren’t much better. And if we start diving back too far into the past, hoo boy. And their past logos have offered some pretty horrendous and illegible typography. Sure, they’ve had some on-ice success, and for a southern-US team, they’ve have a tremendous fanbase and community support, but have you seen who they’re playing?

They’re playing the Habs. The best logo for a Canadian team in the NHL (and 5th overall). The most iconic hockey sweater in existence that has endured for almost 100 years now. The “bleu, blanc et rouge” is on par with the Yankee pinstripes and has been celebrated in book and film. It is the one jersey/logo/brand that will never change because of how iconic it has become. And it plays in the birthplace of hockey. Oh, and there’s 24 banners hanging in the rafters in Montreal that attest to a small amount of success as well, which is always important to a brand’s perception.

One Response to “NHL Playoffs 2015 (Round 2) Countdown and Predictions”