The 2016 Winter Classic is just days away, and I for one couldn’t be more excited. The rink build at Gillette Stadium is nearing completion, the weather forecast looks perfect (no jinx), and my tickets are finally in hand, but adding to the hype of the actual game are the killer retro masks revealed this week by the Habs and Bruins.

Throwbacks seem to be the name of the game this year; rekindling the oldest rivalry in sports between two original six teams, Andrew Raycroft and Jose Theodore facing off in net for the alumni game (with Lyndon Byers and Don Cherry on the Bruins coaching staff…), and Simple Plan singing the Canadian national anthem (yup, those guys).

While some have been in the works for months and some were whipped up in one day, let’s take a look at what masks the four goaltenders had made for this historic event.

With Carey Price sidelined by injury, Canadiens youngster Mike Condon has stepped in and exceeded expectations in filling Price’s big shoes. Preparing to play in the outdoor bout with the Bruins on new year’s day, Condon commissioned a special mask for the occasion from his regular artist, Dave Gunnarsson. Despite rumors that Condon had to bust out his ‘Classic mask early, the actual mask he’ll be wearing in Foxboro was first seen at practice just this past weekend.

The red, white and blue design that debuted on Sunday centers around the Habs’ Winter Classic logo and Championship globe icon from the 1924-25 season that also appears on the team’s jerseys for the event. Small versions of the C-H logo, larger Winter Classic logos and white snowflakes are stamped throughout the mask, creating an overlaying pattern and adding visual interest to the otherwise simple, colorblocked design. The red and blue behind the logo that mimics the jersey striping will look really sharp with the team’s uniforms, a consideration (or lack thereof) that we’ve seen go awry. The flat white cage is also a nice touch, adding an extra hint of retro flair to tie in with the rest of the mask and jersey design.

The best part of this design though is in the personal touches. In addition to the gray shamrock on the chin honoring Condon’s Irish heritage, the Massachusetts native opted to pay tribute to two of the most successful men to ever take the field at Gillette (trying to channel some victory karma maybe?) “I grew up 30 minutes from the stadium, so we were a huge Patriots family,” Condon told NHL.com. Gunnarsson explained on Instagram that “he wanted it to be a little tribute to the New England Patriots, with Tom Brady and coach Bill Belichick,” even complete with Bill’s signature motivational catchphrase, do your job.

It’s still up in the air as to whether the goalies will wear their regular pads or go with the old-school brown look (*prays for old school*), but brown pads would look really, really nice with the rest of these pieces, so here’s hoping!

Canadiens newcomer Ben Scrivens joined the team from Edmonton just barely a week before the big game, but Quebec-based artist Sylvie Marsolais whipped up a vintage-inspired design for the former Oiler in just 24 hours (what!?) that was revealed this morning. The design pays tribute to legendary Canadiens goaltenders Ken Dryden and Jacques Plante (who coincidently had a sweet mask of his own) and the team’s history with vintage logos stamped throughout in a light gray. The Winter Classic logo appears on the backplate along with the Habs’ current logo on top.

While it’s certainly not the most inventive or dynamic mask we’ve seen for a special event, for a 24-hour turnaround, it’s pretty darn impressive. 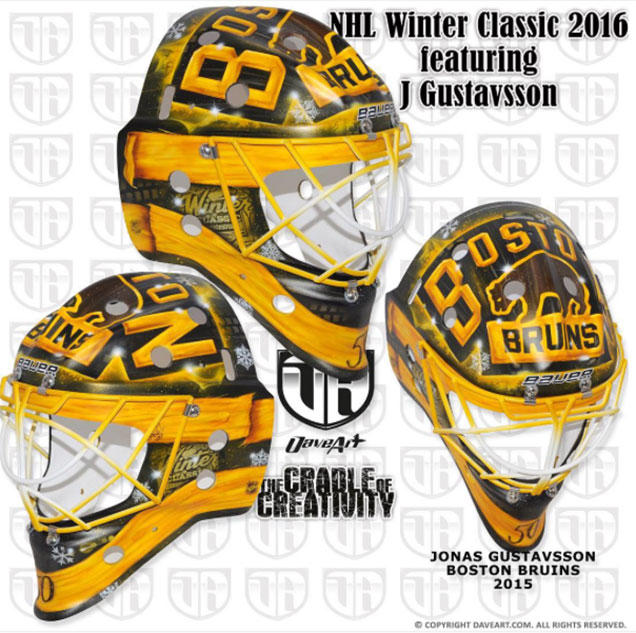 Also painted by Gunnarsson is Jonas Gustavsson’s mask for the outdoor matchup. Gustavsson recently told BostonBruins.com that he and Gunnarsson wanted a “traditional, old school kind of look,” with the Winter Classic bear logo on top in the franchise’s original gold and brown color pallette. The design was painted with a matte finish, which Gunnarsson said on Instagram, “fits perfect with the overall theme.” The Winter Classic event logo is subtly painted on the sides along with white snowflakes dispersed throughout. The white pops up again in the gradient of the cage, where Gunnarsson created a gold-to-white effect, adding a touch of modern flair to an otherwise traditional design.

For the Winter Classic, where we’ve seen the league go oversized and minimalist with all aspects of the event’s design, it makes sense to keep the masks bold and simple like Gunnarsson has done with both Goose and Condon’s, allowing the design to read as well as possible from afar (key phrase being “as possible,” since I’m not sure how much of a mask you’ll be able to see from the upper decks of Gillette Stadium anyway, but I’ll report back after the game).

As far as the color choice, I’m a big fan of using the original brown, yet it’s an interesting pick for the whole mask when the jerseys are predominantly black. The brown does tie in with the felted bear on the front of the sweaters, but I’m eager to see how this bucket looks with the rest of the uni.

Taking Condon’s Patriots tribute backplate and raising it to a whole damn New England football shrine, Tuukka Rask’s bucket will definitely be making Pats fans swoon, drool or whatever other totally normal effects Tom Brady has on Patriots fans. First shared this morning via Torey Krug’s takeover on the Bruins’ instagram (complete with the appropriate hashtag #GOAT) the design was reportedly the brainchild of a Bruins trainer and also painted by Marsolais, with the great one (the football version) on the left and Patriots stars Rob Gronkowski, Julian Edelman and Stephen Gostkowski on the right.

Rask stuck with his signature metallic gold cage and a monochromatic color scheme, the only Bruins gold appearing in the netminder’s name on the chin, a Patriot in Bruins colors on top, and an illustration of the original Boston Garden on the backplate.

After seeing this masterpiece, any weird feelings Bruins fans might have had about a rival goaltender paying tribute to their beloved football team should evaporate. As coach Belichick (who skated with Bruins coach Claude Julien this morning) would say, “we’re on to the Winter Classic.”

What do you think of this year’s Winter Classic masks? Let us know in the comments or join the conversation on Twitter and Facebook!