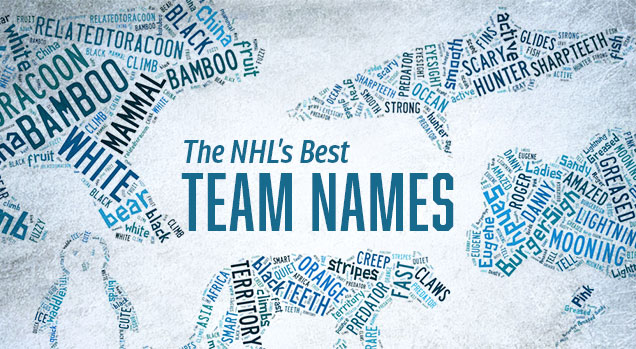 And as we’re finding out, a bad name can kill a branding effort from the very beginning, so it’s an integral part of the brand process. Can a badly-named team still have an amazing visual brand? Sure. And a well-named team can have an awful visual brand. But both the name and the visuals are part of the brand as a whole, so it’s still affected by those components. And considering this is the first NHL team to be named during the era of social media, most people will probably dislike whatever they come up with.

What’s the criteria? Glad you asked, because we’re taking this very seriously.

So, in HbD tradition, let’s count them down from worst to first.

One of only three teams in the league that don’t end with an ‘s’, Wild sounded stupid when it was announced in the ’90s, and it still does. While the esoteric nature is a plus, “eye-uld” isn’t the easiest syllable to say. Is Minnesota that wild of a state? Depends on your definitely of wild. Wilderness? Maybe. Wild parties. Probably not.

Naming your hockey team after a corporate-schlocking bad kid’s movie and then slightly altering the name after a tame, feeble fowl that avoids winter by flying south and has nothing to do with hockey? Yeeeeaaahhhhh.

I know the history of the name, but you’re still naming your teams after a bunch of (mostly) old white guys who seem to have the combined charisma of an unsalted pretzel. Don’t believe me? Here’s a Google Image search for “Senator”. Ooof.

“We’re a unstoppable and uncontrollable force of mayhem and destruction causing horrific devastation and tragedy everywhere we go that shifts direction depending on which way the wind is blowing!”
Yay?

From the song, “St Louis Blues”:

No, that’s not depressing at all.

Got the Saint Louis Blues, just as blue as I can be.

I’m not crying. I swear.

“Bill, we want our team to be considered the stars of the league! What should we name them?”
“Um, Stars?”
“Sold!”
Zero points for originality here. Now, if they would have added something interesting to it, like “North” or something, that would be better.

“Bill, we want our team to be considered the kings of the league! What should we name them?”
“Um, Kings?”
“Sold!”
*yawn*

I guess there’s a strong connection to where they play? Otherwise, it’s not really an imposing or threatening moniker, unless you’re speaking of the inhabitants of an island home to time travel, death smoke and polar bears which can disappear at will…which they’re not.

Like, letters? Well, you forgot to capitalize your logo. Oh, because DC is the capital on the US? Great, I love it when teams offer a geography lesson in their name. At least they weren’t given a completely racist name.

I can’t support a team name that’s directly and purposefully connected to a non-renewable resource that’s threatening the planet, humanity, and an entire generation of potential hockey stars through mismanagement.

Not the biblical one (Satan played for Buffalo, after all), the Jersey Devil was once thought to be a mythological “kangaroo-like creature with the head of a goat, leathery bat-like wings, horns, small arms with clawed hands, cloven hooves and a forked tail” (huh?), but now they’ve discovered there’s actually 8 of them.

As natural disasters go, this isn’t a bad choice, with the cold-and-snow angle being relevant to hockey. But it would be better served with some sharks thrown in there as well.

Speaking of sharks, sure, they’re scary and threatening and all, but it still reeks of pre-pubescent-8-year-old-boy-thinks-its-really-cool-ness. Plus, have you ever seen a shark on some ice? A lot less threatening.

Speaking of pre-pubescent-8-year-old-boy-thinks-its-cool-ness, here come some big cats. I mean really, they’re just cats, right? So, like kittens. And really, how scary can little kitty-panthers be? Whoa! Okay, don’t hurt me, you can be above the Sharks!

Canadian, but slang. It’s the Canadian version of the Yankees, but without anywhere close the amount of history or any sort of winning legacy. Oh, and it rhymes with ‘sucks’, among other things.

Fast planes are cool. Going fast is cool. Top Gun was a cool movie (well, kind of). But ‘Jets’ is nondescript enough to be attached to anything, including very uncool things like a Pokémon jet, Flintstone jets and the New York Jets.

Historical in context (ie – Civil War) and naming constructs (White Sox, etc), it has a lot of things going for it. But hockey players never wear jackets. They wear jerseys on the ice and suits off the ice. Or nothing at all. And if you call a blazer a jacket, you’re an uncouth fashion illiterate.

This natural disaster kills more people in North America per year than avalanche and hurricanes. So as weather goes, this is your most threatening option. And it makes for striking photographs. Striking…get it?

Haha, a spelling error? That’s embaresing. Just kidding, we know it’s the French spelling of Canadian. But then, shouldn’t it be the MontrÉal Canadiens? What is this strange mixture of French and English? Plus, we know Montreal’s in Canada already. Seriously, what’s with all these geography and language lessons?

Esoteric but still physical in nature. Quality logo opportunities and intense/aggressive by nature. It’s a good name, but you remove one single letter, and you get the Lames. Or the Flams – and they’ve been no-showing for years now!

Bonus points for using an alternate name for something common. The Swords? NO. The Sabres. Additional bonus points for not doing that exact thing with buffalo, like the Buffalo Bisons (read: Buffalo Buffalos), which is just so stupid. I’m looking at you The Angels Angels of Anaheim.

A pack of ragtags that are always believed to be roving and on the move, but they never really seem to go very far from where most people don’t want them to be. Sounds about perfect.

An object that flourishes with growth and optimism every summer, and then is dead by November. Enter 1967 joke here. I almost did, I swear. At least the name’s unique – the only team named after flora since the Kenora Thistles.

Wow, how did this flightless bird get so high? Creatures that live on ice and snow and must band together as a team to survive the long and harsh winter season? Now read what I just wrote in Morgan Freeman’s voice. It was a struggle not to place them first.

A name that spans time, sports and leagues, from the Glasgow Rangers (founded 1872) of the Scottish Elite League, to the Texas Rangers (1972) of MLB, to the Kitchener Rangers (1963) of the OHL. And when a bunch of Rangers band together, who knows what greatness could happen.

An old folk name for a brown bear, which makes a potentially boring name much more unique and interesting. It’s actually the Dutch word for “brown”, which makes the name either more ridiculous or more amazing, depending on your tastes.

Is it a bird? Is it a plane? Yeah, sure, could be either. Or maybe Buzz Lightyear, coming to save the day. Or even Abraham Lincoln riding an eagle. Doesn’t matter, it’s all awesome.

Is it a bird? Is it a plane? Yeah, sure, could be either. Or maybe Buzz Lightyear, coming to save the day. Or even Abraham Lincoln riding an eagle. But this time, they’re all coated red with the blood of their enemies. Even more awesome.

The pinnacle of team names in the NHL. It feels historic, contemporary, elegant and aggressive all at the same time. No wonder Las Vegas was trying to poach it. It also makes for super easy headlines when they lose.