The 2014-15 season is just a couple days away, and it seems new buckets are being revealed by the hour. Some of the last and final highlights are picked apart below, as well as links to a handful more. Enjoy! If you missed them, or just can’t get enough of looking at all the new goalie masks this season, go back and read Part 1, Part 2, Part 3 and Part 4. 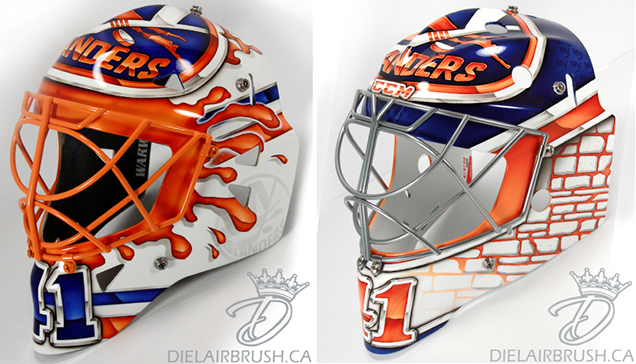 Coming off a trade from St. Louis and a short stint in Washington, Jaro Halak landed himself a contract with the Isles this summer in hopes of putting an end to the team’s recent revolving door of sub-standard goaltenders. Ready to take on the challenge of becoming the Islanders’ number-one, Halak has not one, but two new blue and orange masks for this season, presumably to coordinate with their home and road jerseys. Created by Montreal-based artist David Leroux at Diel Airbrush, both of these masks have a beautiful, bold style, characteristic of all Leroux’s work.

The first of the two, inspired by Curtis Joseph’s Oiler’s mask features a large orange explosion on the front that blends seamlessly into the orange, lacquer-coated cage. The bold orange accents and jersey stripes along the sides and chin were thoughtfully designed to coordinate with the Isles’ jerseys, and the crisply painted chrome logo on top, along with the shadowed logos on each side, pull the entire design together flawlessly.

The second mask also features a large, chrome Islanders logo on the top of the mask, as well as a similarly treated chrome 41 on the chin. The jersey stripes also stayed in this design, but become inverted with the blue background on the top and orange divider between the logo and brick-patterned bottom. This design is also rooted in a strong, graphic aesthetic, and the painterly effects are equally as crisp as on its counterpart. Both these masks will look great on the ice for the last season in Uniondale. More photos of each can be found on Leroux’s instagram page. 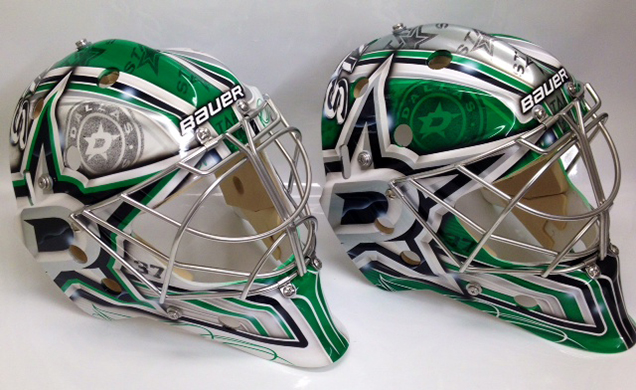 Jaro Halak won’t be the only netminder to be sporting 2 new masks this season. Designed by Marcus Power of Head Strong Grafx, Lehtonen once again turned to his former teammate and fellow countryman Joni Hallikainen, an injury-sidelined goaltender-turned-artist to paint his duo of Stars buckets. Faced with the same challenges as Dave Gunnarsson, who designed and crafted Anders Lindback’s new Stars mask, Power and Hallikainen found a solution to creating a dynamic, beautiful design out of a somewhat sub-par logo.

These masks are essentially mirror images of each other with the green and silver fields just trading spots. Each side showcases a chromed-up rendering of the newest Stars logo (thankfully featuring that one over the Starbucks variation), and the old logo is used as a pattern treatment across the top. The metallic effects on these masks really pop with the silver cages, and the bold graphics on each will contrast perfectly with the Stars’ home and road jerseys. 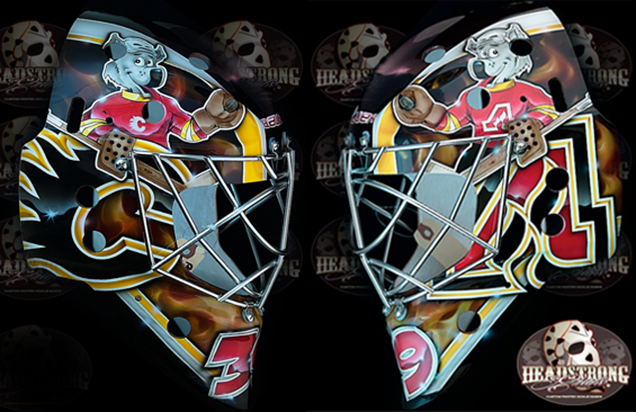 In the next chapter of college-standout Brad Thiessen’s long and winding professional career, the former Northeastern University netminder signed a 2-way contract with Calgary as a potential backup to the Flames’ other offseason acquisition, Jonas Hiller.

Painted by Jason Livery at Head Strong Grafx in Rockville, Maryland, Thiessen’s new bucket features the cute and cuddly mascot, Harvey the Hound in full goalie gear on each side, representing the big league team and AHL affiliate, the Adirondack Flames. Each Harvey rendering is tucked neatly behind chrome versions of the two teams’ logos, and Thiessen’s number 39 sits in bold bubble writing on the chin.

The cartoonish style contrasts nicely with the realistic flame detailing around the chin and backplate, making this a nice, clean mask that will work well regardless of what city Brad ends up in this season. 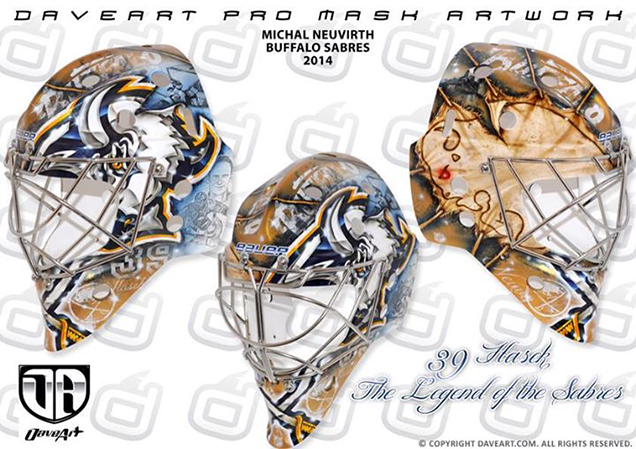 While artist Dave Gunnarsson just recently posted the “official” photos of Neuvirth’s new Buffalo mask, NHL.com recently ran a video feature on the Czech netminder’s new design, paying homage to his country and another one of his childhood idols. In Washington, Neuvirth had portraits of legendary Capitals goaltender Olaf Kolzig and Czech legend Jiri Holeček. Now that he’s joined the Sabres organization, Michal chose to give a nod to Buffalo and Czech goaltending legend Dominik Hasek, who is soon to have his number retired at the First Niagara Center.

This mask has almost a 2-faced, split look, with a hyper-detailed buffalo hyde stretched across the right side, and the 1996-2006 Sabres logo that Hasek himself sported next to his portrait on the left. Other details in this mask pay homage to Neuvirth’s home country, as well as the Sabres’ history. In the NHL.com feature, Neuvirth also gives us a brief glimpse of an alternate mask. The second appears to have a much simpler, more graphic look, but as Michal explains in his interview, “I like the Hasek one better, but I think I’m going to use both of them for the season.” The Hasek mask is extremely busy, but full of beautiful detail, a respectful and artful display of the franchise’s proud history. 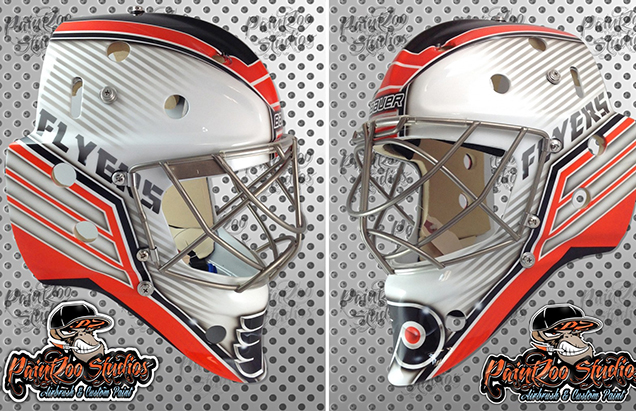 After a string of more elaborate, character-laden masks, Ray Emery’s 2014-15 bucket takes on a more streamlined and graphic approach. Designed by Marcus Power and airbrushed by Franny Drummond at Paintzoo in Langhorne, Pennsylvania, this mask shows off the racecar and motorcycle style that Drummond does so well. The angled stripes in different colors and widths appear to be shooting backwards off the mask, creating the illusion of speed and agility. The team name sits boldly on each side above a triple orange stripe mimicking the wing pattern of the Flyers’ logo on the chin.

The backplate repeats the wing design once again with Emery’s nickname “Razor” stenciled in a high-tech typeface across the center. This design really showcases Drummond’s skill and precision in creating such a clean, crisp design that will nicely compliment the colorblocking in Philly’s jerseys. 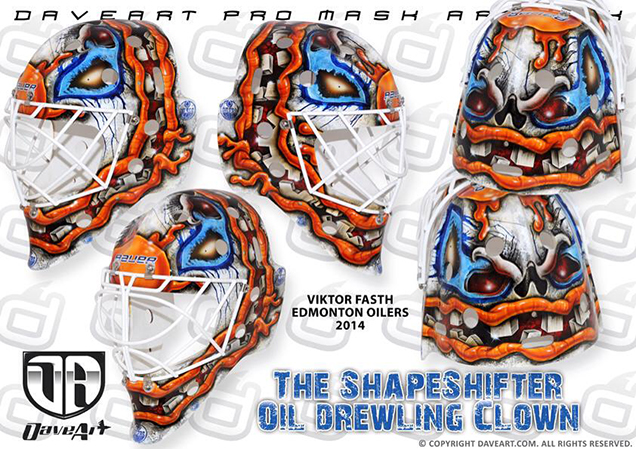 Disclaimer: if you dislike clowns in any way, you might want to look away / stop reading now. Mass producer of pro-masks, Dave Gunnarsson crafted a psychedelic, oil-drooling clown lid for Fasth’s freshman season in Edmonton. “Fasth is transformed into a strange creature of a clown with this mask on… a clown in Oilers colors, and he is [drooling] oil of course,” Gunnarson describes on his Facebook page. Taking the theme one step further, hidden among the clown’s teeth are cog wheels, only adding to the crazed metaphor that has graced Fasth’s head.

This mask is creepy, it’s crazy and it’s trippy as hell, but I can’t help but appreciate the amount of thought, planning and creativity that went into this design. All of Gunnarsson’s work is incredibly detailed, but this mask has not one, but two oil-guzzling clowns hidden in it. Bravo, Dave, you’ve outdone yourself once again! 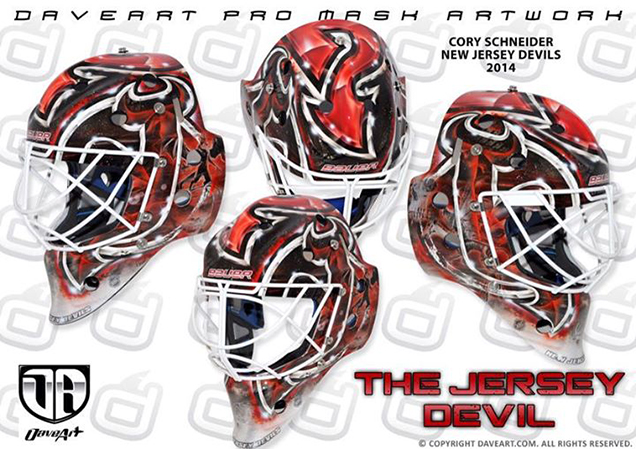 For the first time in nearly 20 years, someone not named Martin Brodeur will be the face of goaltending for the New Jersey Devils. Taking over the reins this season is former Canucks netminder, Cory Schneider. Fully seizing the opportunity of a fresh start, Schneider and artist Dave Gunnarsson decided to change it up and create something different with more flash than what Brodeur had been sporting since the early 90’s.

The one element that remains from Marty’s classic design is the devil tail on the top, perhaps a nod to the future hall of famer, but per his Facebook page, Gunnarsson took more of a storytelling approach with this design, “built on eyewitnesses report[s] of the Jersey Devil… running around in the deep forests of Jersey.” This urban legend creature is illustrated in super-fine detail on each side of the mask, with its “long thin legs, wings, and kind of a goat head.” I like how Gunnarsson and Schneider kept classic elements of Brodeur’s timeless mask in here while still updating the concept and style for the present. It pays respect to Marty’s historic career but has enough of a modern spin to be all Schenider’s own.

Looking to see more new masks? We can’t cover them all, but check out some others debuting this season.

What’s your favourite new mask of the season? Feel free to share in the comments below. And don’t forget about Part 1, Part 2, Part 3 and Part 4!