The leak from a few weeks ago have become official: the Islanders can once again be proud to have one of the worst third jerseys in the league.

I thought the jerseys, on their own, were bad. Now we have the entire uniform to look at and there’s so much wrong with all of this from both a design perspective and from a branding perspective. Let’s break these suckers down, after the jump.

A little bit about branding: a brand is basically nothing more than the public’s perception of you. Every person/place/thing/organization has their own brand, and every interaction that person/place/thing/organization has with the public affects their brand. In hockey, think of the Broad Street Bullies-era of the Flyers. They were essentially assholes on the ice, and they loved it. And their fans loved it. You knew what they were getting into when you played them. That was their brand, and it was successful, so they stuck with it.

Logos and visual design are just one aspect of an organization’s brand (the ‘visual brand’), and it’s basically the physical form of a brand: something that you can touch and look at. For hockey, when you rely on fans – people who become passionate and cling to those pieces of visual brand as a replica for the team itself – for a team’s success from a business perspective, your visual brand is huge. For the Islanders, with this uniform, they basically just launched 40+ years of their brand out the window. The blue/orange combo that personifies then (that they rightfully came back to after experimenting with, well, you know, other stuff) is evident only on the inside of the collar…WHERE NO ONE WILL SEE IT.

Their logo is pared down to a ‘NY’ with some thin orange stripes. I really like the minimalist logo as an alternate for them, but when it’s devoid of any of the team’s other branding, it’s too minimalist and its referencing to the original logo (but damn it’s nice to not have that fake chroming on there). A better option might have been to create a black-and-white version of their primary logo.

All The Colours Fade to Black

And since when is black the official colour of Brooklyn? Since the Nets moved from Jersey to Brooklyn and Jay-Z decided to use it with a lacklustre logo? That’s cool, that extreme minimalism can work on a basketball uniform, where uniforms are generally all one colour. In hockey, it looks like practice jerseys, pyjamas, or worse, those people who wear pyjamas in public.

It’s a single sheet of material covering their entire body, which is generally never done in hockey. The pants, socks or gloves are always a different colour, creating a sense of depth, contrast and visual impact in the uniform. Here, there’s none.

I’m all for innovation in hockey uniform design, but this is just minimalism for minimalism’s sake. You may have heard of ‘less is more’? It’s wrong. ‘Just enough’ is more. And these jerseys just don’t have enough to connect at all with the history of hockey, the history of the franchise, the visual brand of the franchise, or any sort of strong innovation in uniform design. It’s a gimmick meant as some misguided pursuit of Brooklyn hipsters in order to gain relevance in a new locale.

And black jerseys in general are just so boring in hockey, let alone fully black uniforms. Hockey, played on a sheet of white ice, deserves colour on their jerseys. It’s different in basketball, when the hardcourt will always have colour in it, ranging from light beige to walnut brown, and the players’ skin colours are always visible as well. Hockey has none of that, so a completely black uniform has little-to-no visual impact.

That being said, there are some details that work really nicely. Mainly, the four thin white stripes that appear on both the sleeves and the socks. The stripes are mimicking the four stripes in the logo, which represents the four Stanley Cup victories the Isles won from 1980–83 (and they’re still the last team in any major professional sport to win four championships in a row). Because four stripes is more than usual – and because of being minimalist for minimalist’s sake – the stripes are super thin. This is an interesting and modern innovation to jersey/uniform design that actually works, and works well.

The alternate Brooklyn logo they’re be placing on their black helmets (whoa, a team’s doing something interesting on a helmet!!) is a nice touch.

More: Anatomy of a Uniform I: The Helmet

What’s not nice though? That white collar that goes part of the way around the neck and then just stops for no apparent reason. For such a minimalist approach to the uniform, the inclusion of that seems strange, and it doesn’t serve much purpose and looks half-finished. It also helps to make it look even more like a practice jersey. Just remove it.

And because of the black-and-white nature of the uniform, that CCM logo on the pants sticks out like a sore thumb, giving us our first possible look into what uniform advertising might look like. Enjoy watching CCM’s NY Islanders.

A quite typographic note: I like the typeface they’re using on the back of the jerseys. It’s simple, classic, has sports-related roots but with a more modern approach. It’s just unfortunate that it’s not consistently used on the sleeve, where they seem to have a fatter version of the same typeface.

This whole uniform reeks of a publicity stunt of trying to be relevant to a new locale whose apparent sports visual identity relies on a basketball team with no historical connection to the place, but rather dictated by current trends. And of course, it’s a publicity stunt to sell more jerseys. Trends don’t last, and neither do bad jerseys/uniforms. If these last more than a season or two, I’ll be shocked. Or just deeply disappointed. 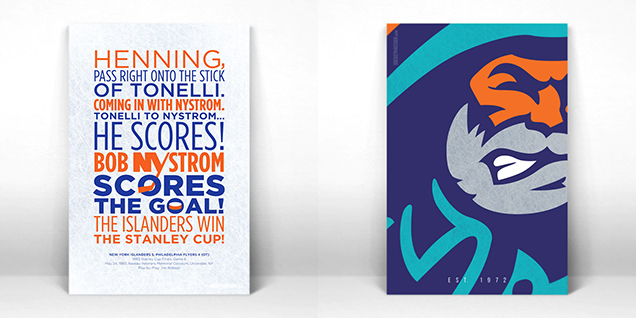 You can get your own piece of Islanders history from the Hockey By Design Store! Get the Islanders’ entry in the Play-By-Play series and Vintage series, pictured above.