With less than a week to go, the final wave of new masks are ready to be reviewed and graded before they hit the ice. If you’ve missed parts 1 through 4, be sure to catch up: 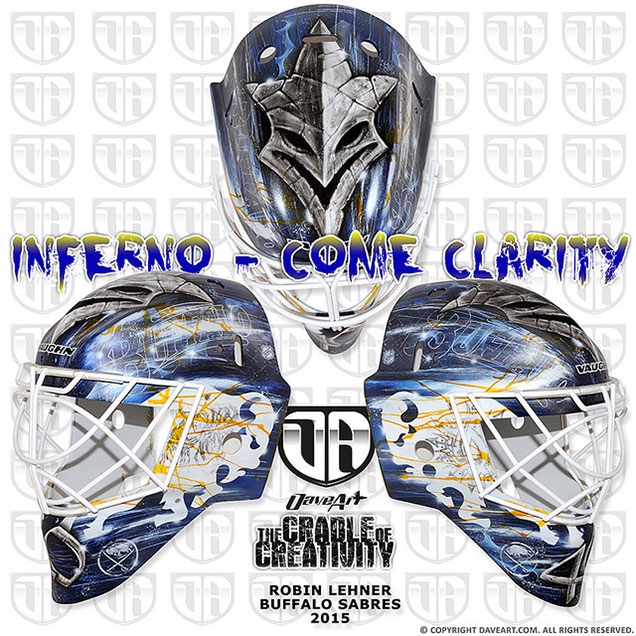 Goalies pull from all kinds of inspiration when brainstorming themes for their masks. Be it their families, hometowns or favorite films, the possibilities are endless and always intriguing. For his first season in Buffalo, Swedish goaltender Robin Lehner went for a musical influence and payed tribute to his favorite band, Gothenburg metal group, In Flames. Lehner’s Senators mask last season also drew inspiration from the Swedish rockers, and artist Dave Gunnarsson helped translate the well-received design into one fitting in Buffalo.

“Robin and I had a vision to create a dark and gritty design,” Gunnarsson describes on Instagram, “a violent look filled with scratches and marks and splatter.” The roughed up look is certainly metal-worthy and incorporates elements from the band’s album art in a unified and creative way. “I like to have their covers on there,” Lehner told music blog Blabbermouth.net of last season’s design. “I listen to them a lot before games and stuff.”

Gunnarsson interpreted the stone motif from the band’s Black – Ash Inheritance cover and mimicked the rocky texture in the 40 on the chin. The band references here are nice and subtle, allowing the primary focus to remain on the buffalos on each side and team colors. 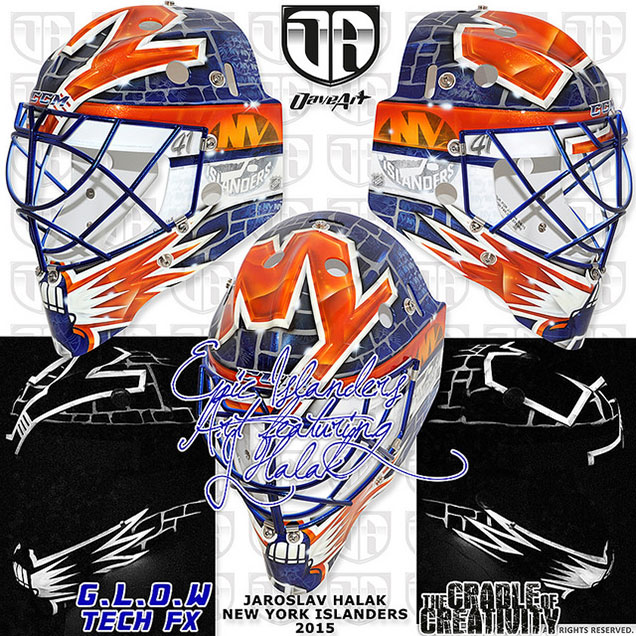 After sporting two different bold masks on Long Island last season, Halak returned to work with Dave Gunnarsson to kick off the season in the Isles’ new home. Sticking with the brick wall motif again, the graffiti-like design features a dynamic, glowing (literally glowing) lighthouse on the chin and the team’s new alternate logo prominently on the top. The blue and orange color blocking is framed nicely by the blue cage, giving the mask a retro sort of flair.

The painterly effects are, as always, fantastic, and the composition of this mask is well balanced. If nothing else, it’ll give a much-needed pop of color to those new black pyjama uniforms.

It’s been said before that the Minnesota Wild brand as a concept is a tough one to work with. The poor designer who was told to create a visual identifier for “wild” probably had their head spinning for weeks, but that’s neither here nor there. Darcy Kuemper’s new Wild mask has many similar problems to that of the team’s logo in that it just has too much going on. The Minnesota wordmark is on either side of the jaw with small Wild logos in a hologram pattern in the background, plus the wilderness with trees and sun from the logo sits on the top of the mask in addition to the claw tear patterns on either side with a sparkling holiday light effect peaking through. Whoa.

As with all of Dave Gunnarsson’s work, the artistry in this mask is incredibly detailed and well executed, but sadly, that workmanship gets lost in the overwhelming composition.

Playfully known to Leafs fans as “Optimus Reim,” James Reimer and long-time artist Dave Gunnarsson worked up yet another chapter in the netminder’s long history of Transformers-inspired masks. Described by Gunnarsson on Instagram as “a mix of an action design with action paintings,” this mask is designed to actually transform like its inspiration. No, there will be no laser beams or explosives shooting out of Reimer’s helmet, but as Gunnarsson explains, “on a distance it is a classic Maple Leafs design with the Leaf in focus, and when you look closer, the mask transform[s] in front of your eyes, just like a real Transformer.”

The detail in this mask is pretty remarkable, from the blueprint designs of Transformers in the background to the hyper realistic detail in the flame-like ribbons blowing around the front. What keeps this design from turning into an overwhelming explosion of special effects is the large maple leaf in the center. The large white and gray field balances out the busyness of everything around it and really does allow the mask to transform before our eyes. 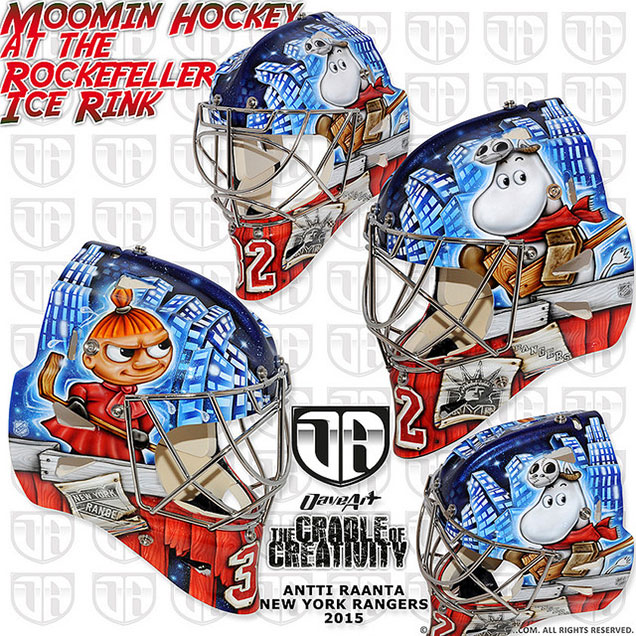 In his debut season with the Rangers, former Blackhawk Antti Raanta will be showcasing a very different looking mask from what most of his colleagues typically opt for. Inspired by Finnish cartoon characters the Moomins, Dave Gunnarsson depicts the fictional family as hockey players on the outdoor rink at Rockefeller Center.

“Antti wanted something special on his new New York Rangers mask. A dear tribute to his home country of Finland,” Gunnarsson shared on Instagram. “The Moomintroll is a goalie with an old school goalie mask on his head, playing hockey with his buddy Little My. The mask is transformed into the world famous rink, with the awesome skyscrapers in the background.”

While this look is completely outside of Gunnarsson’s usual hyper-detailed, special effect-filled realm, he’s really done an excellent job of interpreting the cartoonist’s style and creating a believable scene with these characters in one of the city’s most recognizable landmarks. There’s certainly nothing intimidating or intense about this mask, but the playful style and nod to Raanta’s home country is a refreshing departure from what we typically see around the league. 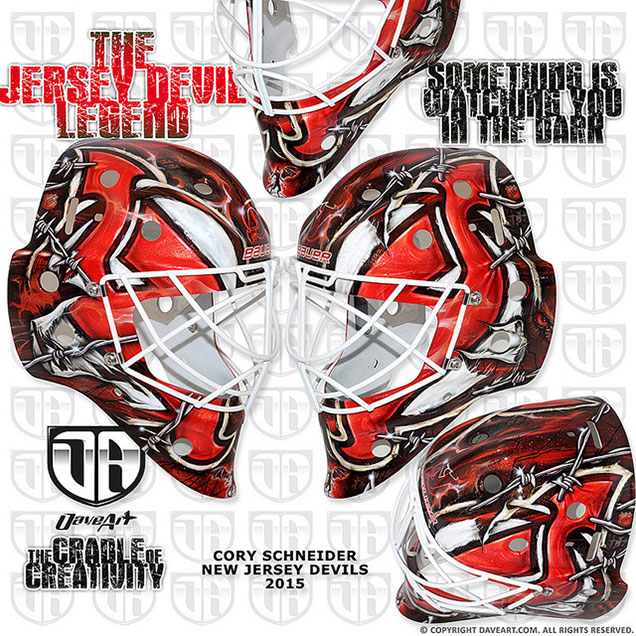 For Cory Schneider’s mask this season, Gunnarsson took a variety of interpretations on the devil theme and compiled them into one big red design. The Devils’ logo spans almost the entire height of the mask on each side with barbed wire fencing wrapped around and tearing through. Behind the logo on the left, a sinister devil eye can be seen peeking through, and a winged devil silhouette sits between the two logo tails in the center.

While a lot of thought clearly went into this mask to create multiple dimensions of devil motifs, the end result is a bit predictable – seemingly like we’ve seen this mask before. 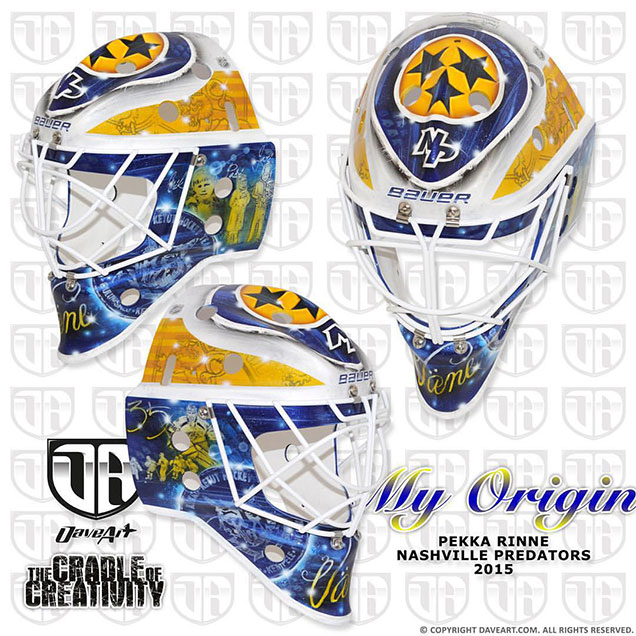 In a rare aberration from Rinne’s long string of monster masks, this season Dave Gunnarsson helped the Preds goaltender create a tribute mask for his cousin. “On a distance it is a clean cut Predators design with the logo in focus in the middle,” Gunnarsson explains on Instagram. “On the side you will find paintings of Pekka[‘s] cousins and his sister as kids. On the other side, paintings of Pekka and his cousins playing pond hockey as kids, and also a painting of Pekka playing as a pro.”

The interpretation of Nashville’s all-star logo is fantastic, as the guitar pick shape fits perfectly on the top of the mask. As Gunnarsson described, it showcases in the Predators brand in an explicit way while still honoring Rinne’s family as he wanted. The composition is a bit stagnant, being so symmetrical and having most of the artistry hidden in such fine, subtle details, but this mask really is a beautiful tribute to Rinne’s family, which makes it an automatic success.

Agree? Disagree? Let us know in the comments or on Twitter. As more goalie masks for the new season are announced, we’ll be showcasing them. Make sure to come back and check it out!