The NHL officially unveiled what the All-Stars (and John Scott) will be wearing on January 31 in Nashville at this year’s All-Star Game.

In an effort to make the event more exciting this year, they’ve changed the format so there it will be 3-on-3 tournament featuring 4 divisional teams. So, it just makes sense that they only came up with 2 jerseys. We’ll break it down after the jump.

As already alluded to, it doesn’t make a lot of sense to have 4 teams share two jerseys that they’ll have to keep pulling on and off depending on which other team they’re playing. I really don’t get how this makes any sense at all, especially when the NHL is all about using the All-Star Game as a platform for more adventurous (that’s the nicest word I could think of) jersey design. Instead, you’ll be spending the day (if you bother to watch the ASG) trying to remember which team you’re cheering for (if you have a favourite division that you want to win). Sometimes they’ll wear black! Sometimes white! Sometimes they won’t even be playing, but you’ll still be stupidly cheering for them! Why? Because NHL. That’s why.

Easy solution, since they’re intent on having the Predators’ colours integrated into the design, is to have two more jerseys, using those colours. Here’s a quick and rough Photoshop job of what that could look like (using the exact same jersey design)… 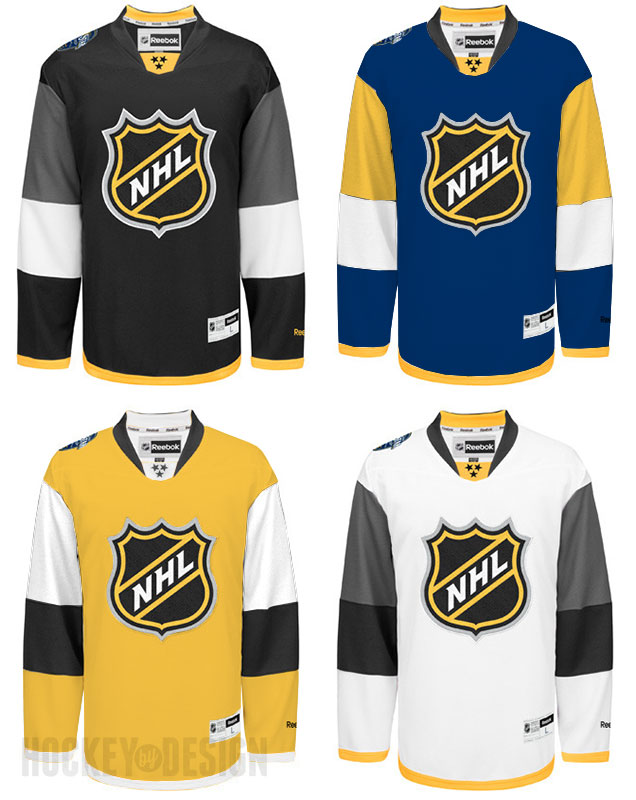 Four jerseys for four teams. And it took me about 2 minutes to come up with the colour combos. The blue vs black match-up might be the only iffy combination in terms of confusing which team is which when they’re playing, but the yellow sleeve blocks would help.

Why they stuck with only 2? No idea. They’re not saving much money on jersey production since they’ll have to make 2 (black and white) for each player anyway. This way, fans can pick a team, and know the entire tournament exactly who they’re cheering for. And they’d probably sell more of the jerseys if there’s more versions of them.

Stadium Jersey in Search of a Stadium

Okay, now about the actual design. The thing that struck me the most about these jerseys is that they look very Stadium Series-esque: minimal stripes and big chunks of colour. And they used a logical line of thinking to come up with that aesthetic – so that people in the nosebleeds of a Stadium can still identify what minuscule dots they’re cheering for. I guess the NHL liked it so much (or, more likely, the Series jerseys sold so well), they stuck with it even though the games are taking place within the intimacy of a regular NHL arena.

As minimal aesthetics go, it’s not bad. A simple stripe along the bottom of the jersey and sleeves, and a couple big chunks around the sleeves with the top one wrapping around to the back. That wrapping is an aspect of the jersey I really like, as too often the stripes just end and begin in places with no reasoning (I’m looking at you Stadium Series jerseys), so this treatment feels much more thoughtful and complete.

The black and white color scheme in each jersey shares the colors of the keys on a piano to celebrate the city of Nashville’s “Music City” nickname.

It’s referencing the colours more than the shapes, but I’d have to think that’s the thinking behind the simple blocks of colour they’re using. One problem though…there are no grey keys on a piano.

Speaking of colour (or lack thereof), the league again went for a black and a white jersey with only a little bit of Predators’ gold colour used in the logo and on the bottom stripes and collar, denying the fans any sort of visual impact when watching the games. I’m a big advocate of, whenever possible, having colour vs colour. The NBA and NFL have started playing with that, and it’s a shame the NHL seems adverse to it. Here, they have an amazing opportunity to have one-off jerseys that can make a strong visual impact. Instead, they took the monochromatic approach. It’s more Sharks/Kings than WC Leafs/Wings.

Plus, there’s the added bonus of the black jersey being disturbingly reminiscent of those awful Black Ice jerseys that came out a few years back. Those are pretty awful jerseys and to showcase anything that’s close to those and force any actual NHL player (let along an All-Star) to wear it is akin to forcing Gretzky to wear the Burger King jersey.

Scroll back up to the 4-uniform image to see what they could have done instead. Golds versus blues? I’m much cooler with that than blacks versus whites.

But, as mentioned earlier, it’s supposed to mimic a piano (which is a big stretch). But there’s no way to explain the grey, so it seems like a slapped-on afterthought than an integral part of the design process.

Some of the details are pretty cool though. The three stars from the Tennessee flag (and the Preds’ alternate logo) on the collar piece in place of the NHL logo is smart and ensures that stars will be on the jersey, as is customary.

The shoulder patch is the event logo, which is absolutely fantastic. So good, in fact, the logo ranked as one of the top designs to come out in 2015 in the NHL:

The modification of the NHL logo – adding the Predators gold – in apparently meaningful as well (also from the same press release):

Each All-Star jersey features the official NHL Shield infused with the Predators’ gold in the crest. For the on-ice version of the All-Star jersey, the crest has been constructed with reflective material which glimmers in certain light as a salute to Nashville’s vibrant night-life scene.

Hahahaha, cool. Oh wait, you’re serious? Nashville has a cool night-life to be sure, but I’m not sure a reflective gold in the logo really symbolizes that in a meaningful way. Again, it feels an afterthought than design requirement. It sounds like Reebook just wanted to keeping playing with some new technology. That being said, I don’t mind it, but don’t pretend it’s something it’s not. The numbers will also have the same reflective material on them. It’s impossible to get across in images, so I’m interested to see it in the person to get a sense of how it really looks.

The All-Star jerseys will feature numbers and letters designed as modern interpretations of traditional country music poster lettering, which has been a defining aesthetic of Nashville.

I haven’t seen any images of what the typography would look like yet, but I’d imagine something that’s reminiscent of what’s on the event logo as well.

UPDATE! An image of the typography has been leaked (apparently through Snapchat?) that shows what numbers and nameplates will look like. And it could be the best thing about the jersey – subtle country-inspired changes to standard hockey typography, with shadow bars giving depth to the numbers and small slab-serifs added to the nameplates. Super cool and a beautiful detail.

Is it better than last year’s horrible jerseys? Definitely. Are they fantastic examples of modern jersey design? Definitely not. While the over-simplified design has a modern feel to it, the lack of detailing and monochromatic Black Ice-esque design elements makes this jersey generally uninspiring and bland. There’s very little visual impact and it has no sense of the vibrancy or excitement that it’s meant to represent. And there’s only 2 jerseys for 4 teams, which is the biggest head-shaker of all.